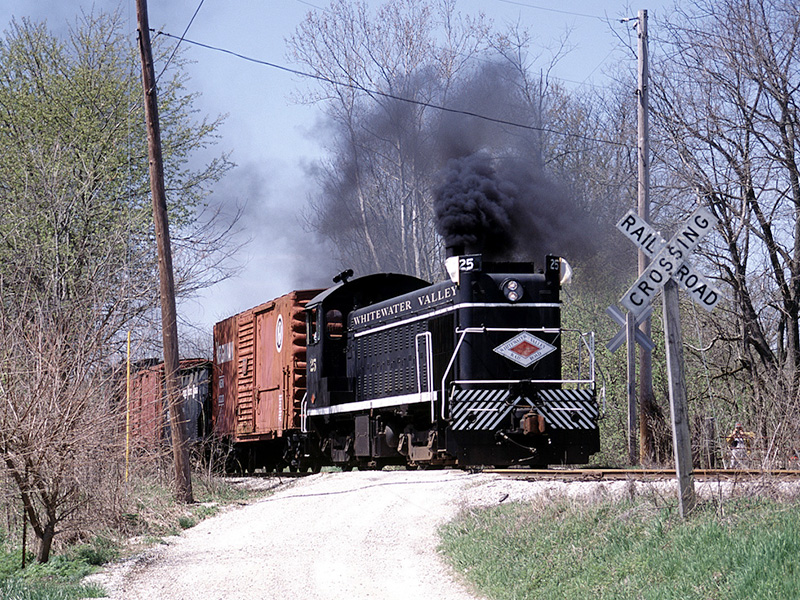 One of only six surviving diesel locomotives built by Lima-Hamilton, and the only one that has operated in at least the last decade (if not more), ex-Cincinnati Union Terminal No. 25 now makes its home on the Whitewater Valley tourist line. Photo by Steve Barry 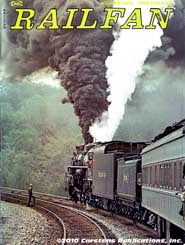 By Louis A. Marre /Photos as noted

Smallest of the major builders of steam locomotives and last to enter the diesel-electric field, Lima Locomotive Works built a mere 174 units in its short career as Lima-Hamilton Corporation. Since this total production was so miniscule in comparison to the competition (about six weeks of current EMD production would equal the two-year output of Lima), and was, furthermore, sold almost exclusively to Class One carriers or terminal companies, it is not surprising that many present generation diesel fans may never have seen a diesel carrying the bronze diamond builders plate.

After dieselization was completed, most owners of large rosters began immediately to weed out units that were in a small minority, and this proved the downfall of the Limas, which became “orphans” in a sense only a year or two after their construction. Indeed within sixteen years of the last unit’s debut, Lima power vanished utterly from the operations of all common-carrier owners — unless one accepts primarily tourist-oriented special carriers such as Cadillac & Lack City or Whitewater Valley, as true common carriers.

The few surviving units of this date are concentrated rather close to their northwestern Ohio birthplace: Armco Steel at Middletown, Ohio; Copperweld Steel at Youngstown, Ohio; Nicholson Terminal at Ecorse, Michigan; and the Whitewater Valley tourist line in Brookville, Indiana. It is unlikely that any further moves will be made by any of these units except to the scrap dealers, and so it is now possible to write the closing chapter on the short history of Lima as a builder of American locomotives.

Unable to afford the time and expense of designing its own major components, Lima moved to acquire the rights to the Hamilton engine design and contracted with Westinghouse for electrical equipment. The change in attitude from “Steam Forever” to “Maybe a Few Diesels” was signalled by a change of corporate title, to Lima-Hamilton Corporation, in 1947. It was not until March of 1949 that a diesel-electric invaded the sanctum sanctorum of steam super power, however. The first unit constructed was a 1000-hp switcher, assembled in a corner of the tender shop of the works at Lima while the last gasp of steam echoed through the erecting hall. This modest unit was a switcher of traditional configuration, differing only slightly from all subsequent Lima practice, and it foreshadowed the short future. As it turned out, it was the 1000 (later 1200) horsepower switcher that made Lima’s reputation in the field, for what that was worth.The prime mover in that first and all subsequent units was a rather simple four-cycle, in-line, 8 1/2″x12″, 950-rpm diesel with modest turbocharging provisions, long used in marine and stationary or heavy equipment applications. Lima offered it in a six- and eight-cylinder model from the beginning to the end of production.

Unfortunately, this engine did not prove to be very adaptable to locomotive use. It was expensive to maintain (especially the turbocharger), of course required a special parts inventory, and was singularly prone to producing quantities of black smoke , even at idle.

This latter quality, though coming long before the current sensitivity to pollution did not endear the engine to maintenance forces — though the occassional railfan who noticed it began to take it into account, and would wait for the engine to load up before taking his photograph. With the right timing, a passable imitation of a coal burning switcher could be recorded on film.The six-cylinder version of the Hamilton engine was rated up to 900-h.p., while the eight was first billed as an even thousand horse plant, then upgraded to 1200 a bit later where it remained until the end of production. Lima catalogued eleven offerings though never in fact assigning a model designation to any of them. They appear in the trade literature only under their specification numbers as shown in the table of Lima diesel locomotive designs.

Because of general unfamiliarity with the specification numbers, railfans subsequently assign model designations to Lima products for their own convenience. One such system runs as follows:

After delivery of their transfer units, Pennsylvania re-rated them at 2500-hp., causing subsequent confusion since Lima had advertised and sold them at 2400-hp.To demonstrate its new product, Lima constructed a total of five demonstration units, all 1000-hp. switchers. The first was the initial unit, assembled in March of 1949 and put out for demonstration work in May of that year. Three more followed that December, and a final unit came in April of 1950. As with all Lima production, Westinghouse electrical equipment of very high dependability and rugged performance characteristics was employed and this somewhat offset the shortcomings of the Hamilton engine. In 1949, when the competition included Alco’s 244-series engines and Baldwin’s near-Neanderthal De La Vergne’s the Hamilton did not compare so poorly as it did when Alco’s 251, EMD’s later versions of the 567, etc. began to appear. Thus the short demonstration tours of the Lima switchers began to sell units.

The roster shows that many of Lima’s prime customers were its plant neighbors: Baltimore & Ohio, Erie, Nickel Plate and Pennsy. No units were sold in the South or the West; the geographical units being one group of switchers to the New Haven (and the shortest lived) and a batch to the Wabash in North Kansas City. Faithful steam customer New York Central also became a veritable collector by accumulating the three standard varieties of switchers as well as the sole examples of the light roadswitcher.

No demonstration units were built apart from the five switchers, though there were firm plans for a 1600-hp. centercab road switcher (specification A-3176) that went as far as assigning a construction number, but no further. These and other plans were suspended by the impending end of independent existence for Lima, which came with the delivery of the last PRR centercab in August of 1951.

One hundred and seventy-four units in two years were not enough to keep Lima viable as a competitor in the tightening diesel market. Sensing that it was indeed too little and too late, Lima chose to submerge its personality into long-time steam rival Baldwin Locomotive Works of Philadelphia, which seemed to be a thriving concern in the market atmosphere of 1951. Although Baldwin had problems enough with its own prime mover, the surviving entity of Baldwin-Lima-Hamilton chose to abandon the Hamilton engine altogether, and turned the Lima plant over to heavy machinery and earthmoving equipment manufacture. Within twenty-eight months the first Lima unit became an orphan, and the last one was, in fact, without a parent before it was delivered.

The fate of the first Lima unit boded ill for its descendants. After a short demonstration period, the original unit was sold to the Toledo, Peoria & Western in December of 1949. Seven years after the Baldwin-Lima-Hamilton consolidation, it was sold to a terminal dock operation in Detroit. No other common carrier was interested in second-hand Limas. This proved to be a universal rule. No Lima ever sold to another common carrier, barring the two tourist roads who have or have had them. The units offered for sale did find a market in industrial use, however, often because of the rugged simplicity of the Westinghouse electrical system if not for the dubious merits of the Hamilton engine. At this late date, seven years after the disappearance of the last unit from common carrier service, there are 24 LS-1000 and LS-1200 units operating for Armco Steel, four on the property if not all in use at Copperweld Steel, while Nicholson Terminal, Peabody Coal, and U.S. Pipe and Foundry have gotten satisfactory service from two apiece. Recently, the new tourist hauler in Eastern Indiana, the Whitewater Valley, has acquired one ex-Cincinnati Union Terminal LS-750 from the Cadillac & Lake City, and two siblings from Peabody Coal.

Lima cannot be said to have made any great contributions to the “state of the art” in American diesel history. Plainly, it was a story of too little, too late. Nor did they win any esthetic prizes with boxy hoods, frog-eye indicators, plain rectangular stacks and a no-nonsense cab. But as representatives of one last effort to stay in the business by a classic builder of steam power, the surviving Lima-Hamilton diesels deserve to have at least one specimen preserved. The poor record of success in this regard by tourist-hauling lines does not bode well for the future of the three LS-750’s surviving, while Armco has recently begun to scrap their second-hand fleet as new EMD switchers arrive yearly. If a switcher-collecting version of the Delaware & Hudson is not found soon, some museum group will have to make exertions to see that all units carrying the bronze diamond do not go the way of the Centipede, Erie-built and DL109.

This article originally appeared in the Winter 1974 issue of Railfan.