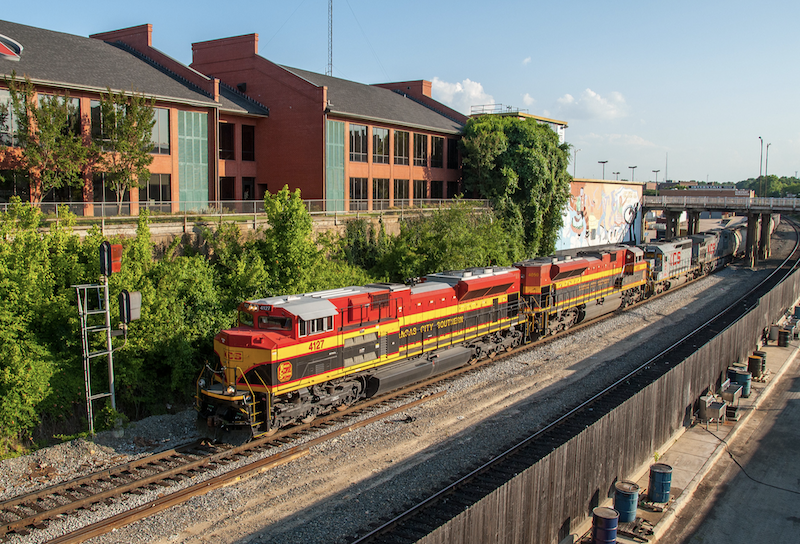 At least three other entities — including a nameless Class I — tried to purchase all or part of Kansas City Southern in the months before it took Canadian National’s final offer. Photo by Steve Barry.

KANSAS CITY — On March 21, Kansas City Southern and Canadian Pacific rocked the railroad world when they announced plans to merge. But new information released this week reveals that the storm had been brewing months before and that CP had been competing for KCS with an investor consortium identified only as “Party A” since last summer.

The proxy statement released ahead of the upcoming shareholder vote on the proposed KCS-Canadian National deal also revealed that an unnamed Class I had tried to purchase only part of KCS late last year.

According to a 379-page packet to KCS investors, talks of selling the railroad began back in July when KCS executives were approached by an unnamed group of investors. On July 31, 2020, the Wall Street Journal reported that two private equity firms were speaking to banks about financing a takeover of KCS. The deal reportedly involved Blackstone Group Inc. and Global Infrastructure Partners and financing from CitiBank, according to anonymous sources at the time.

On August 17, 2020, the investor consortium, identified as “Party A,” made an offer to acquire KCS for $195 per share. The following day, the KCS board met and rejected the offer. But three days later, KCS President and CEO Patrick Ottensmeyer got an unsolicited call from CP President and CEO Keith Creel. During the call, Creel said that CP and KCS should merge. He also said that he believed of all the potential Class I combinations, only CP-KCS could get over the U.S. Surface Transportation Board’s regulatory hurdles.

While KCS officials discussed Creel’s offer, Ottensmeyer got yet another call in late August. Canadian National CEO JJ Ruest called to express his own interest in acquiring KCS, but little came from the call afterwards.

KCS officials briefly entertained the idea of taking CP or Party A’s offers, but ultimately decided not to in September.

In November, “a representative from another Class I company” expressed interest in acquiring part of KCS. The mysterious Class I and what they were seeking was not revealed in documents and nothing came from it.

In late November, Party A came back with another offer: $230 per share in cash for KCS. The KCS board met again but this time expressed more interest in a possible deal. The board also directed Ottensmeyer to tell CP that they would entertain an offer to merge. Starting in December, KCS officials entered talks with both Party A and CP that resulted in multiple offers, most of which were deemed too low by the KCS board. For example, on March 15, Party A offered $250 per share and CP offered cash and stock equal to $268 per share. KCS officials came to believe that Party A could not offer more money. The board directed Ottensmeyer to tell Creel that if CP sweetened their offer just a little bit more, they would take it. CP returned with a new offer: $90 cash plus .489 shares of CP per KCS stock, worth $272 per share of KCS common stock. Financial advisors reviewed the deal and said it was good. On March 20, the KCS board met and voted to take the offer. The following morning, CP and KCS announced plans to merge.

The announcement shook the railroad world and set off an enthralling two-month period where CP and KCS touted the benefits of the merger before CN came in and made a better offer, setting off a battle between the two Canadian Class Is. KCS ultimately decided to take CN’s offer and now it is going to its shareholders and the STB for the final say.