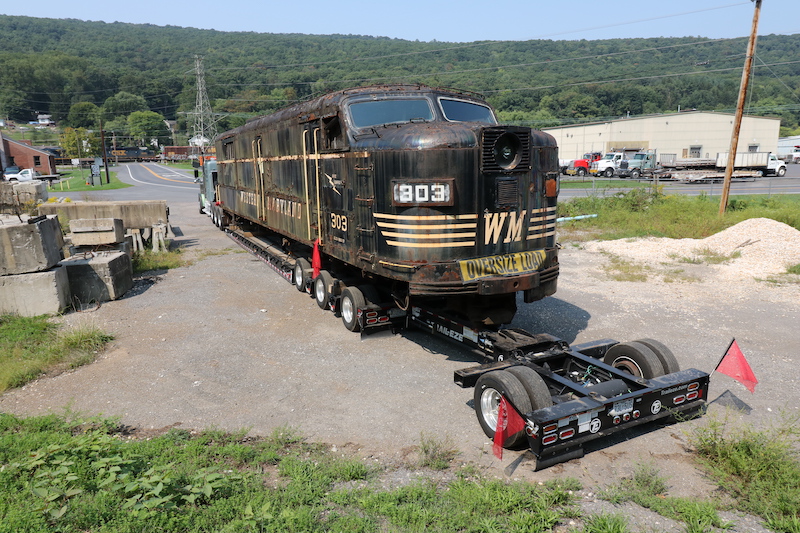 Western Maryland FA-2 303 was recently on the Georges Creek Railway and has been sold to a Kansas City shop. The locomotive is seen here loaded for its trip west. Courtesy Photo.

BARTON, Maryland — Motorists from Maryland to Kansas got a glimpse of Western Maryland FA-2 303 recently as the Alco carbody unit was moved by truck to a Kansas City railroad shop, where plans call for its restoration to service as a control cab.

Its departure from a remote siding near Barton, Md., was bittersweet for the man who made it possible to see a Western Maryland FA-2 in action in the 21st Century, former owner Gerald Altizer. He purchased the unit from the Baltimore & Ohio Museum in 2000. Inspired by the efforts of Ed Bowers, who has saved numerous rare diesels by purchasing them and finding new work for them, Altizer set out to acquire, repaint and operate former WM engines on a stretch of their home rails.

His hopes began to reach fruition when the first section of the CSX Georges Creek Subdivision was acquired in 2005 by a new short line in which Altizer was a partner. In the ensuing years, Georges Creek Railway would gain control of the entire former CSX subdivision, eventually rostering seven other WM survivors, along with a few Alco S-6 and T-6 locomotives, models which WM operated. For more than a decade, Altizer was living his dream. A cruel wakeup came in 2019 as the railroad lost its only major customer when Verso shut down its paper plant in Luke, Md.. The closure drained the lifeblood of the local economy and the railroad. A petition to abandon GCK was filed with STB the following year, and most if not all of the GCK locomotives have been sold.

The FA-2 turned Long Island Rail Road “Power Pack” was another matter, as it belonged to Altizer personally. Western Maryland sold all four of its 1951-vintage FA-2s to GE in 1972 for conversion to control cabs for LIRR.  The traction motors were removed in the process, and most of the 244 prime movers were replaced with smaller, skid-mounted engines used to generate HEP for the LIRR passenger cars. Accordingly, there is little use for such a unit for anything but passenger excursions, so Altizer allowed its use on the West Virginia Central and Durbin & Greenbriar Valley at different times, much to the appreciation of railfans. Since 2016, it has been sitting unused near Barton, its once gleaming paint now fully “weathered” over more than two decades.

“It was not easy to let it go,” Altizer wrote in a post to Railway Preservation News. He always hoped to restore WM 303 as a fully functional locomotive and spent years acquiring most of the needed components, including an Alco 12-244 prime mover.

The new owner plans to rehabilitate the unit for use as a control cab by a tourist or heritage railroad.

“I have a potential buyer that I believe will be interested in it, but that’s not a certainty at this point,” said Mike Roberts, who bought the engine from Altizer. He expressed confidence that someone would be interested in it eventually, if not the first prospect. “I’m in no hurry,” he added.

Roberts said he has abundant space in his shop to house the unit during the work, putting a halt to its deterioration.

Just one other WM FA-2 survives, the former WM 302/LIRR 610, owned by the Western Maryland Railway Historical Society and long-stored on the West Virginia Central.

It’s unclear if WM 303 will remain in the paint scheme it originally wore for 21 years and has worn again for the past 22, or if a new owner will want to revive the paint scheme of another of the two dozen railroads that owned Alco freight cabs. Whatever the outcome, Gerald Altizer can take solace in knowing that WM 303 resided on WM rails even longer in this century than in the last, thanks to his efforts.