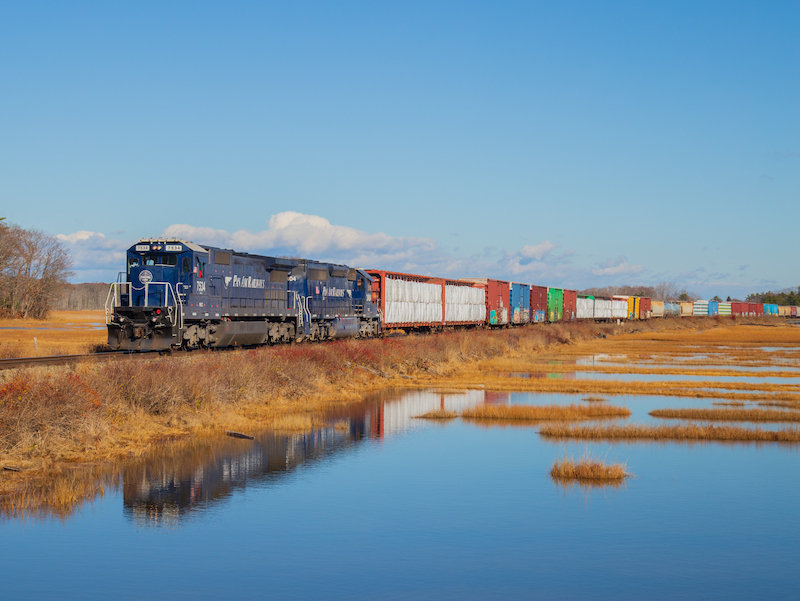 In a filing on Thursday, the U.S. Department of Justice stated it believed CSX should have to sell its stake in Pan Am Southern. A Pan Am Railway freight train is seen westbound at Scarborough Marsh near Portland, Maine. Photo by Justin Thomas Winiarz.

WASHINGTON — The U.S. Department of Justice said CSX Transportation’s acquisition of Pan Am Railways raises “concerns” about rail competition in New England and that the plan to let Genesee & Wyoming operate the former Boston & Maine is an “imperfect” solution to that problem.

On Thursday, the Justice Department filed an eight-page brief with the U.S. Surface Transportation Board, which is presently considering a proposal by CSX to take over New England’s Pan Am.

As part of CSX’s plan, G&W would operate Pan Am Southern — a decade-old joint venture between Pan Am and Norfolk Southern — and NS would get trackage rights over CSX’s Boston Line so that it can move double-stack trains to Ayer, Mass. The new G&W line would be called Berkshire & Eastern. CSX would operate the railroad east of Ayer, Mass., into New Hampshire and Maine. Observers have said that the ultimate prize for CSX isn’t the former B&M across western Massachusetts, but rather the former Maine Central because it will get the Class I closer to the Maritimes.

But the Department of Justice said the deal would give CSX too much control over the freight rail network in Massachusetts because it would have a stake in both parallel freight lines across the state. The Justice Department also stated that by leasing the line to G&W, it would mean that the company would have too much control over traffic in and out of southern Vermont. G&W also owns New England Central. That was a chief concern of the Vermont Rail System, which came out against the deal earlier this year.

The Department of Justice said the only solution in its eyes was that CSX sold its stake in Pan Am Southern, possibly to NS.

In its filing, the Justice Department noted that preserving rail competition was an important goal for the current administration. In July, President Joe Biden issued an executive order calling for more competition in the American economy, including in the rail sector.