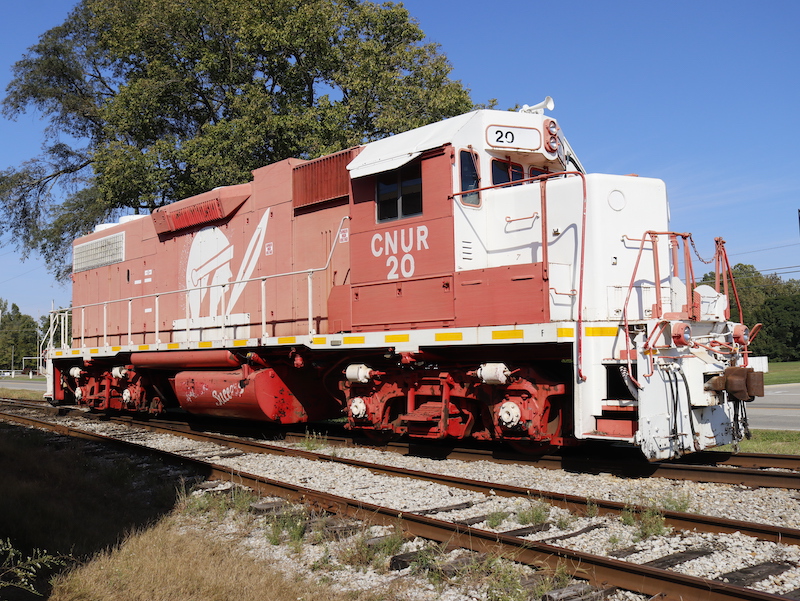 Honoring the Connersville High School Spartans is CNUR 20, a GP38-2 built in 1975 as NdeM 9400, the last of 101 delivered to the National Railways of Mexico that year. Photo by Eric Berger.

CONNERSVILLE, Ind. — As the summer draws to a close, so will the operations of C&NC Railroad between Beesons and New Castle, Ind., due to the cancellation of its lease on the track by Norfolk Southern. In filings with the U.S. Surface Transportation Board, NS said it plans to assume common carrier service obligations at midnight on September 20.  The STB gave its approval in an August 20 decision allowing C&NC to waive advance notice requirements discontinue service.

The severing of the former Nickel Plate Road line running north from Beesons and the former New York Central line running south to Connersville represents the symbolic final disassembly of the Indiana Hi Rail “empire.” An early short line holding company, Indiana Hi Rail started with that 5.2-mile NYC line in 1981, adding the 21-mile line to New Castle in 1989. The system grew to include 461 miles of track on various disconnected lines in Indiana, Illinois and Ohio. It also operated and leased boxcars and locomotives through a related company, Indiana Boxcar. The poor track condition of many of the lines acquired by the system led to frequent derailments and delays, which resulted in shipper complaints and lost business. The company filed bankruptcy in 1994 and was sold off piecemeal by the case trustee over the next three years. The line between Connersville and New Castle became the Connersville & New Castle in 1997.

The separation of those original IHRC lines occurred on paper a decade ago, when Big Four Terminal Railroad became the official operator of the NYC segment while C&NC (its official name) replaced Connersville & New Castle on the former NKP line, with CNUR reporting marks. The Alcos that made Indiana Hi Rail a fan favorite are long gone, but C&NC has kept them happy by operating with a pair of ex-Santa Fe GP7u’s and ex-Illinois Central GP10s in tattered original paint, along with an ex-NdeM GP38-2 in a paint scheme honoring the Connersville Spartans, the local high school. Most of were formerly used on the associated Maumee & Western, a northern Ohio short line which was sold to Pioneer Rail in 2013. Some or all of these are expected to continue operating on the BFTR line.

Though Norfolk Southern told the STB it would ensure a seamless transition and improved customer service, its latest filing indicated an intent to contract with New Castle Southern Railroad to operate the line. No further information was available on that company or what motive power they might bring to the line.

A segment of the former NYC line is also occupied by the White Water Valley Railroad and it’s famed collection of Lima and other First Generation diesels south of downtown Connersville, but the switch connecting it with BFTM/CNUR was removed several years ago.