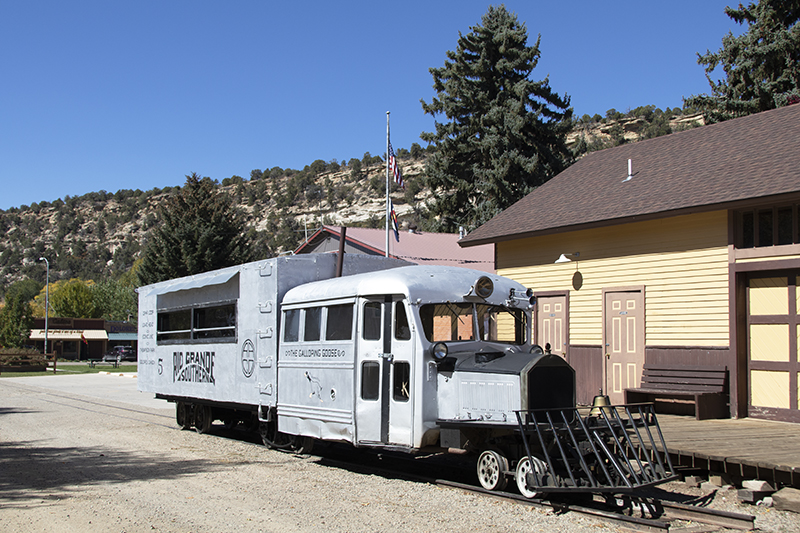 Rio Grande Southern 5 is running on the Cumbres & Toltec this week before heading north to the Durango & Silverton. Photo by Justin Franz.

CHAMA, N.M. — The Rio Grande Southern’s iconic “Galloping Goose” is hitting the main line this fall on two well-known narrow gauge railroads. This week, Goose 5 is running on the Cumbres & Toltec Scenic, before heading north for a stint on the Durango & Silverton Narrow Gauge Railroad.

RGS’ railbuses (also known as “Motors”) were built in the 1930s when the narrow-gauge railroad in southwest Colorado was looking to save money. The vehicles could haul passengers, mail and a little bit of freight and the RGS ultimately owned seven of them. In later years, RGS lost the contract to haul mail and the railroad fell on hard times. The railroad made a last-ditch effort in the early 1950s appealing to tourists wanting to explore the San Juan Mountains and as part of that the motors were dubbed “Galloping Geese.” Sadly, the cute name wasn’t enough to entice more passengers and the railroad was abandoned in 1952.

The same year, the Dolores Rotary Club purchased Galloping Goose 5 from the court-appointed receiver for $250 and put it on display. In 1987, the Galloping Goose Historical Society of Dolores, Inc. was founded and rebuilt the depot in Dolores. In the 1990s, they completely rebuilt Goose 5 and it has since operated on narrow gauge railroads in the region.

Amazingly, six of the seven Geese still exist today. Motors 2, 6 and 7 are at the Colorado Railroad Museum;  3 is at Knott’s Berry Farm in California; and 4 is at Telluride, Colo. An operating replica of Goose 1, which was scrapped in the 1930s, can now be found at the Ridgway Railroad Museum in Ridgeway, Colo.

This week, Goose 5 has been working on the C&TS. On Thursday, it was running from Antonito to Osier and back. On Friday, it was crossing the entire 64-mile line from Antonito to Chama (Passengers could take a motorcoach ride from Chama to Antonito to start the day. On Saturday, September 25, it’s making a roundtrip from Chama to Osier. And on Sunday, September 26, it’ll make a quick roundtrip from Chama to the summit of Cumbres Pass. As of this week, tickets were still available for some runs. Those interested in riding can visit CumbresToltec.com or call 1-888-286-2737. All trips include photo runbys.

After its visit to the C&TS, the Goose will be loaded up on a truck and taken north to Durango where it will run for three days, October 1 – 3. For ticket information, visit DurangoTrain.com.

For more information about the Galloping Goose, visit gallopinggoose5.org.