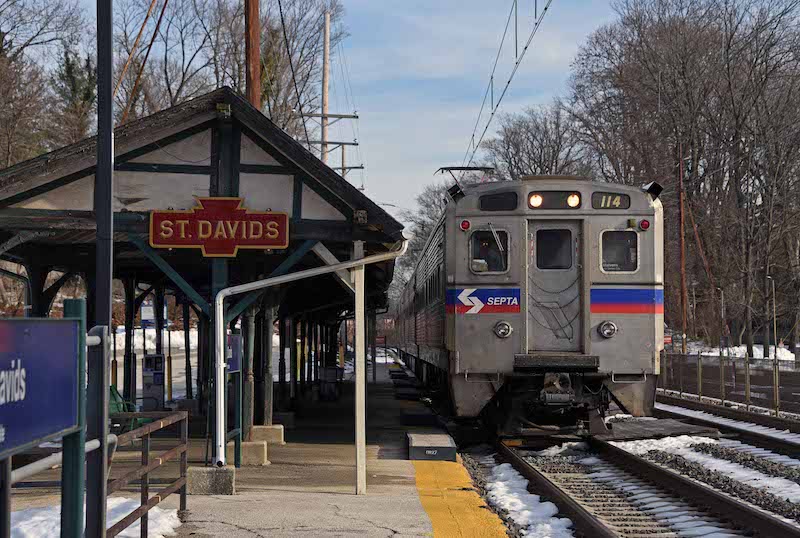 An outbound SEPTA train makes its St. Davids stop in the Philadelphia suburbs on Dec. 23. Photo by M.T.Burkhart.

WAYNE, Pa. – The platform canopies at the St. Davids train station are once again adorned with Pennsylvania Railroad “keystone” signs thanks to a local historical society.

Located on the “Main Line” in the Philadelphia suburbs, St. Davids is served by the Southeastern Pennsylvania Transportation Authority (SEPTA) on the busy Paoli-Thorndale Line.

“St. Davids train station has been unfairly overlooked since its Victorian-era depot was demolished more than 50 years ago,” the Radnor Historical Society said. “We wanted to change that, so… we took an opportunity to borrow one of the original Pennsylvania Railroad signs from which new castings were made using generous donations from many neighbors of the station.”

Named for the nearby Episcopal church, the original station was built in 1890. The structure was demolished in 1966, but the platform canopies remained. The replacement white stucco station now houses a real estate office.

The new signs are painted in the classic Pennsy red and gold. Two were placed by SEPTA crews on the outbound side in early December, with two also planned for the ends of the inbound canopies soon. The shelters are also due for new paint, according to the historical society.