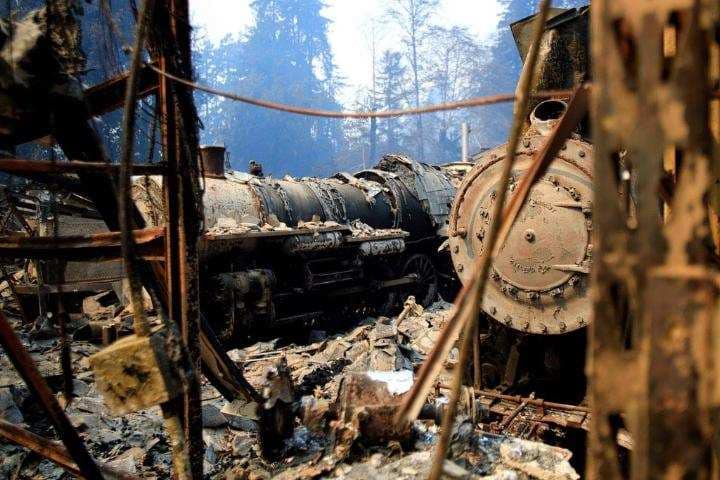 DAVENPORT, Calif. — An historic 19-inch gauge live steam railroad in California has been heavily damaged by an out-of-control wildfire. The Swanton Pacific Railroad located on a ranch north of Santa Cruz is home to four steam locomotives built-in 1915 to provide rides during the Panama–Pacific International Exposition in San Francisco. The live steam railroad dates back to the 1970s and is owned by California Polytechnic State University (Cal Poly).

On Thursday, a massive wildfire swept through the area and a building where at least two steam locomotives were stored was destroyed. Images of the locomotives show extensive damage. Another locomotive that would normally be on-site, 4-6-2 1912, was spared because it is currently being rebuilt by Wasatch Railroad Contractors. The full scope of the damage will not be known until it is safe to get on site.

“The Santa Cruz fires have impacted the Swanton Pacific Ranch and the Swanton Pacific Railroad,” officials wrote. “At this time we do not have much in the way of first-hand information on the status of facilities and equipment but we do know the fire burned through the area and at least some of our buildings were damaged or destroyed.  We will try to provide updates as we are able to get more information.” 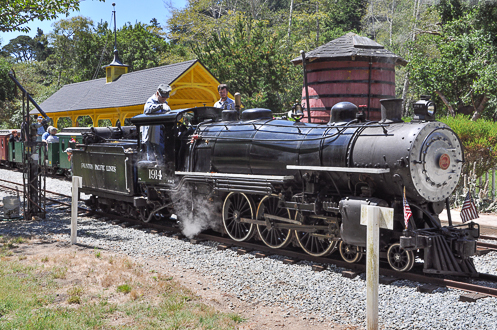 One of the locomotives before the fire. Photo Courtesy of Cal Poly.

The railroad was built by Albert B. Smith and donated to Cal Poly in the 1990s. The railroad is operated by the school and the Swanton Pacific Railroad Society.

The wildfire, known as the CZU Lightning Complex Fire, is also threatening the 3-foot gauge Roaring Camp & Big Trees Narrow Gauge Railroad. The railroad is currently closed and some of the locomotives have been moved out of buildings for safety. According to Cal Fire, The CZU Lightning Complex Fire has burned more than 50,000 acres and forced the evacuation of 64,000 people. At least 50 buildings have been destroyed and two people have been injured.