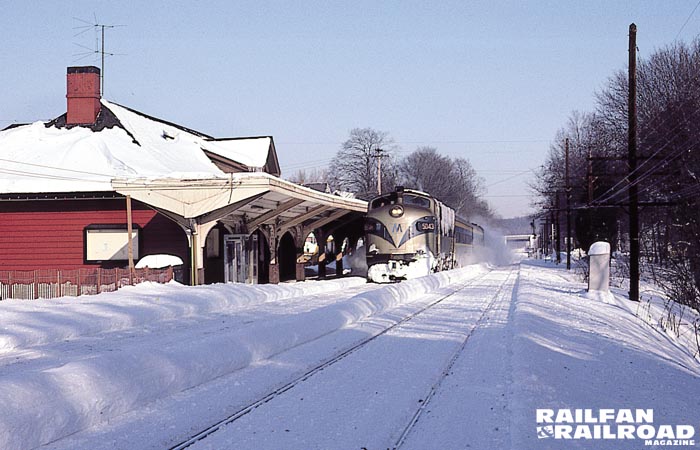 A southbound Metro-North Harlem Line train arrives at the old depot in Katonah, New York, about 41 miles from the bumping block at Grand Central Terminal. The snow is piled high as a pair of MTA FL9’s spliced by two ex-Delaware & Hudson coaches substitute for the normal mid-day run of Budd RDC’s on February 13, 1983. The author’s first rides were on trains like these. Photo by Arthur J. Deeks 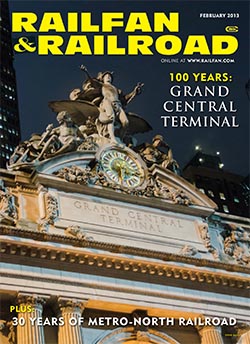 By Otto M. Vondrak/Photos as noted

I tell anyone who will listen that my father was largely responsible for starting my interest in trains when I was very young. Sure, that Lionel train was a lot of fun, but I really looked forward to those train trips with dad to go to his workshop in New York City. We had moved to Katonah, a small community located in northern Westchester County, in 1980. Our town was located along the old New York Central Harlem Division, at that time operated by Conrail on behalf of the MTA as the Harlem Line. Our venerable train station was a classic suburban structure that had long been converted to other uses, yet retained a small room to be used by waiting passengers. The station retained its majestic canopy crafted from solid oak, and quaint wooden signs hung from the eaves that proclaimed KATONAH.

The railroads had suffered decades of neglect as Conrail was a reluctant custodian of the commuter trains and wanted to desperately get out of the passenger business altogether. Though the MTA provided a subsidy for the service, broken trains continued to limp through a decaying infrastructure. Despite these shortcomings, my dad decided that he was going to become a regular commuter.

One day my dad told me he needed a “helper” down at his shop and that we’d be spending the day together. I was excited and didn’t know what to expect. I remember it was a cold winter day, and I had my face buried against my dad’s pants leg to hide from the cold when we arrived at the station. We eventually retreated inside to the small waiting room, which had mirrors on the walls to help mask its true size. A bunch of morning passengers were huddled in this dimly lit room, which had no chairs or benches that I recall. A horn was heard in the distance starting to blow for the Jay Street crossing, so like lemmings we all hurried outside to the platform. A New York express blasted through the station without stopping, horns blaring and old newspapers blowing down the track. Discouraged that we were “tricked,” everyone turned around to slink back into the waiting room. 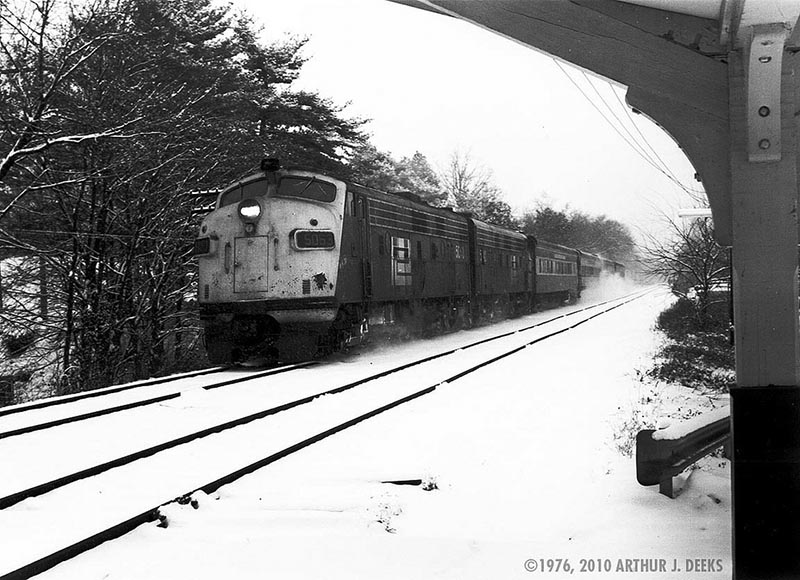 A pair of Penn Central FL9s lead by 5053 (ex-NH 2053) arrives in Katonah on a snowy day in January 1976. The FL9s are wearing the special yellow-and-blue paint scheme applied to these locomotives after MTA subsidy funding began in 1970. In just four months, PC would be absorbed by Conrail, and MTA would assume direct operation of the line through Metro-North in 1983. Photo by Arthur J. Deeks

After what seemed like an enternity, another horn was heard in the distance heralding our train’s arrival. Everyone flowed out onto the platform and I remember looking up the track and seeing the headlight of our approaching train. Truth be told, I think I remember hearing our train before I could really see it. In fact, it was the noise that made the most impression on me at the time. “DAD!” I yelled, “THIS TRAIN IS REALLY LOUD!” I covered my ears as the pair of FL9’s made their way closer. Rust was bleeding through the faded blue and yellow paint suggested by the MTA. My eyes followed the journal caps on the EMD Flexicoil trucks as they rolled past. The noise of the two locomotives was nearly unbearable. A little steam wisped around the platform as the coaches clunk-clunked over jointed rail. The train groaned to a halt, and an eldery conductor bounced down the stairs to help passengers board.

The inside of the train was spartan and finished in a color I can only call “institutional.” Steam heat mixed with old newspapers, coffee cups, and stale cigarettes (some trains still carried smoking cars in those days). The Lexan windows were a deep shade of seawater green (to possibly help shade the interior), while others were fogged from exposure to ultraviolet rays. My dad pointed me to an open seat next to a clean window, and for the next hour or so I was glued to the glass as we passed through suburbs and cities on our way to Grand Central.

It was difficult to find something nice to say about Grand Central Terminal in those days. It was dark and dank with the only bright spot literally coming from Kodak’s Colorama display over the West Balcony. We hurried though on our way out to the street to catch a bus downtown (in those days my mother strictly forbid my dad to take me on the subway).

After spending the day “helping” my father restore furniture in his shop, we made our way back uptown for the journey home. Once again we found a window seat, and I was ready for the panorama to unfold. I distinctly remember emerging from the Park Avenue Tunnel and being in awe of the cityscape before me. But not for long. As we clattered over the Harlem River lift bridge, I turned to my dad and said, “I’m thirsty.”

“Well then,” he said, “Let’s take a trip to the bar car!” Dad took me by the hand and we made our way through the train to the bar car. In those days, most of the diesel-hauled trains had some sort of lounge car service, a holdover from the old days. This train was no different. The details are hazy, but if you pressed me, I’d have to say it was some sort of tavern or grill car, most likely a second-hand acquisition. Looking around, I was simply amazed that there was a restaurant on the train! We walked up to the bar, and my dad told me to tell the man what I wanted. Soon we were making our way back to our seats with my cup of orange juice on ice. The rest of the trip was uneventful and the Conrail crews got us home safely that night.I must have talked about that train trip an awful lot because it was the first of many I would take with my dad over the years. 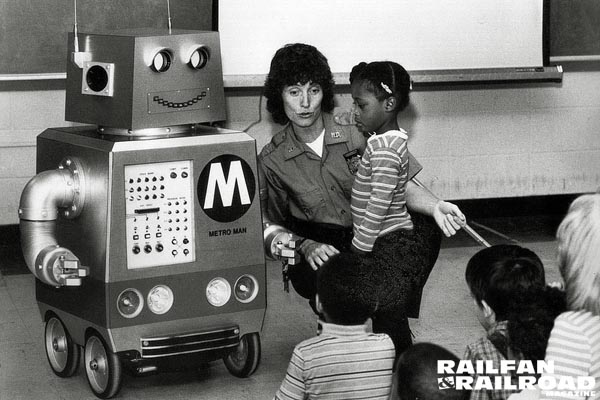 Going into the first grade, I watched my railroad transform right in front of my eyes. From the school bus I’d catch a glimpse as workers prepared to install third rail and build a new station for the coming of the electric trains. On January 1, 1983, the Conrail name was replaced with the official sounding Metro-North Commuter Railroad, and safety officers were visiting my school to warn us of the dangers of the new third rail. Each year I’d look forward to their visit, not so much because I loved their mechanical mascot Metro Man, but because finally we were talking about something I liked in school.

One casualty of the improvements was the old train station in Katonah. The electric trains required the construction of a new high-level platform just north of the station. In order to accommodate this construction, the space between the tracks would have to be widened. The old platform canopy would have to be removed for clearance. I remembered hearing the adults say how it was “old” and “rotten” and had to come down anyway. I’ll never forget the sight of seeing a backhoe struggle to try to take down the “old, rotten” canopy as we passed through town. Those workers would eventually give up and use a chain saw to take it down. 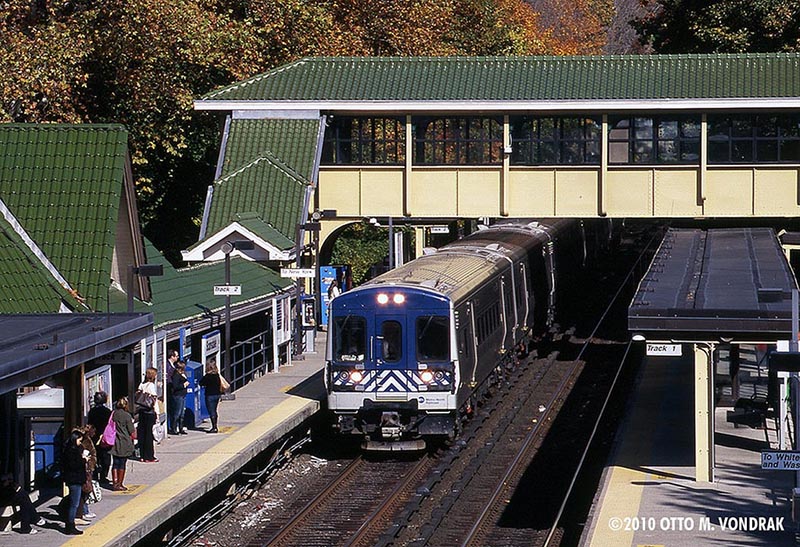 Electric trains and high-level platforms are the norm for Metro-North’s Harlem Line, though vestiges of New York Central heritage remain in this scene at Scarsdale, N.Y. Train 9524 arrives at Scarsdale station, as seen from the Popham Road bridge on December 10, 2010. Otto M. Vondrak photo

It took me a while to warm up to the new electric trains when they first began to roll through town. Not only did they cause the final closure of the old station, but they banished the diesels I liked from the Harlem Line. On a subsequent trip to the city on the new trains, my dad took me up to the front of the train where I found my fixture for the next ten years. For you see, the Budd M-1’s and M-3’s had a front door that allowed me to safely have an “engineer’s eye” view from the front of the train. I was hooked.

Soon I was off to college, and would not return until a job opportunity brought me back in 2002. So much had changed on my hometown railroad. Only a handful of FL9’s remained to handle branch line shuttles. New electric trains from Bombardier were on the way to replace the old Budd m.u. cars. Wayside signals were replaced with cab indications. Railroaders I grew up with were retiring. Even a whole new system of train numbers was in place.

Though with all of the changes, only one thing had not changed during my visits to Katonah: The excitement of hearing that New York-bound train blow for the Jay Street crossing.

This article appeared in the February 2013 issue of Railfan & Railroad.