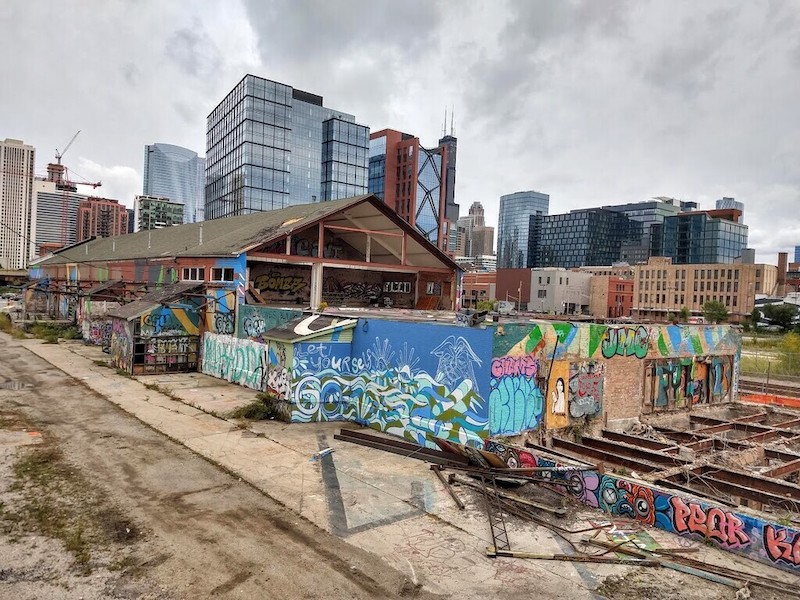 The brewery will be located in a former Pennsylvania Railroad freight terminal in Chicago’s Fulton Market neighborhood. Photo by Greg Kaufman.

CHICAGO — The adaptive reuse of former railroad stations as restaurants has almost become a tired cliché in North America, but now an international conglomerate wants to take that several steps forward.

Guinness, the Irish makers of the iconic black ale that marks every St. Patrick’s Day and would-be “Irish pub” in North America, has announced plans to open a second brewery in North America, a brewpub and taproom to be opened in a former Pennsylvania Railroad freight terminal in Chicago’s Fulton Market neighborhood. The opening would be in early 2023, “hopefully in time for St. Patrick’s Day,” said Jay Sethi, the chief marketing officer of Guinness’ parent company, Diageo Beer Co., a subsidiary of global spirits giant Diageo.

The 15,000-square-foot building, built as the PRR’s Sangamon Street freight terminal circa 1920, has lain neglected and vandalized for years next to what is now Metra’s C&M Subdivision (former Milwaukee Road, in the past a stretch jointly owned by the Milwaukee and PRR) and a block from Metra’s Geneva Subdivision (former C&NW), both on their final approaches to Union Station and Ogilvie Transportation Center (formerly North Western Terminal) respectively. Plans had been announced as far back as 2017 for a high-rise development on an adjacent lot, but have not progressed of late. The building also now bears on its eastern wall a mural by international artist Solomon Souza, painted in the summer of 2017; that mural is slated to disappear under Guinness redecorating.

The pub, whose formal name will be announced in the coming months, will be a second U.S. location for the 262-year-old beer brand, and part of Guinness’ bid to remain active in the ever-diversifying U.S. beer (and beer alternatives) market. In 2017, Guinness opened a production brewery, the Guinness Open Gate Brewery, in a former distillery just south of Baltimore, brewing a new Guinness Blonde Ale for the northeastern U.S. market, with a taproom and visitors center that opened to the public a year later. The Chicago operation will be far smaller than the Maryland location, pouring both imported Guinness stout and specialty beers brewed and available only onsite, with a ten-barrel in-house brewing system.

This would not be the first microbrewery to open an outlet in a big-city railroad station, current or former. Independence Brewing formerly operated an outlet in Philadelphia’s Reading Terminal until 2007, and Capitol City Brewing opened in the former Post Office building adjacent to Washington Union Station in 2011 but closed several years later as the Smithsonian National Postal Museum expanded.