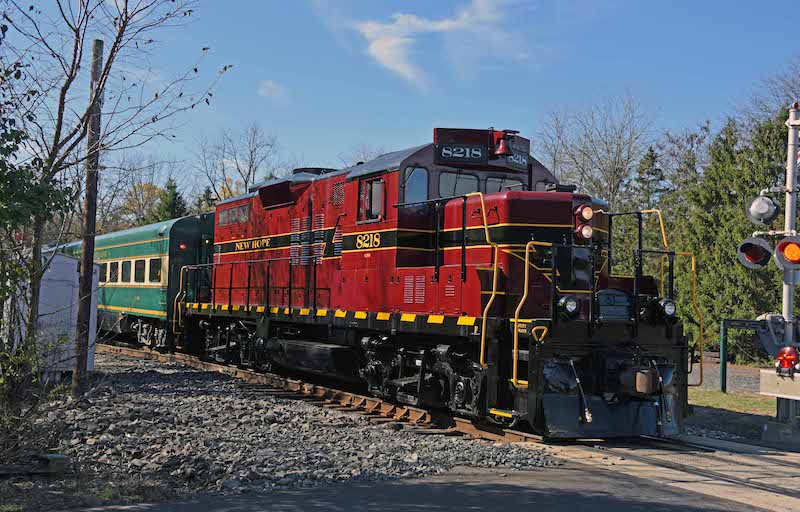 The former Canadian Pacific GP9 was sold to the Pennsylvania tourist road in 2015 and recently got a fresh coat of paint. Photo by M.T. Burkhart.

NEW HOPE, Pa.  – New Hope Railroad’s GP9u 8218 was given a fresh coat of corporate colors in time for the railroad’s popular fall trips.

Built by GMD in 1957, GP9 8678 was part of a 73-unit order for Canadian Pacific, according to New Hope. It underwent a thorough rebuilding in 1988, which also saw the high short hood cut down and it was renumbered to 8218. In its final year on the CP, it was often assigned to the railroad’s geometry train.

In 2015, it came to New Hope after retirement by CP, according to the railroad. For the past five years, it wore a simple maroon scheme until emerging this October in full maroon, black and yellow. In a departure from past schemes, the locomotive is simply lettered “New Hope.”

Formerly called New Hope & Ivyland, the line was rebranded a few years ago. It runs trips in southeastern Pennsylvania between its namesake town and Lahaska, with some longer runs to Buckingham, often with former Lancaster & Chester 2-8-0 40. For the full slate of excursions, visit newhoperailroad.com.