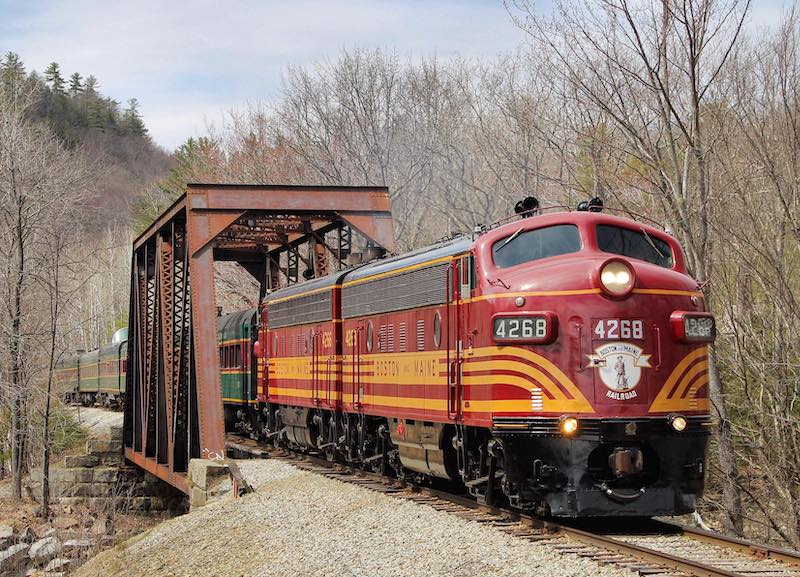 Conway Scenic will use newly-restored F7A 4268 and sister-locomotive 4266 on the first run to Crawford Notch. Locomotive 4268 made its public debut on April 24, 2022. Photo by Andrew Dale | Courtesy of Conway Scenic Railroad.

On April 24, the two locomotives made their public debut together on CSRR’s Conway and Sawyer River excursions. Later this month, on May 22, the two F7s will lead the first train to Crawford Notch, the Mountaineer. Unlike the regular excursion, this inaugural trip of the year will make a number of photo stops along the way and will be one of the few times this year the two classic cab units will go to Crawford Notch.

The 470 Club, based in Portland, Maine, owns a number of historic diesels, including the B&M F7s and former B&M GP9 1741. Locomotive 4266 has been in service for decades but 4268 has mostly sat on display, gutted of the internals needed to run. A few years ago, the non-profit 470 Club stepped up its efforts to get the locomotive in service and acquired a New Hampshire Northcoast GP9 to serve as a parts source. After a few years of steady work, the F7A was fired up this spring for the first time since the 1970s.

For more information and to buy tickets, visit ConwayScenic.com.