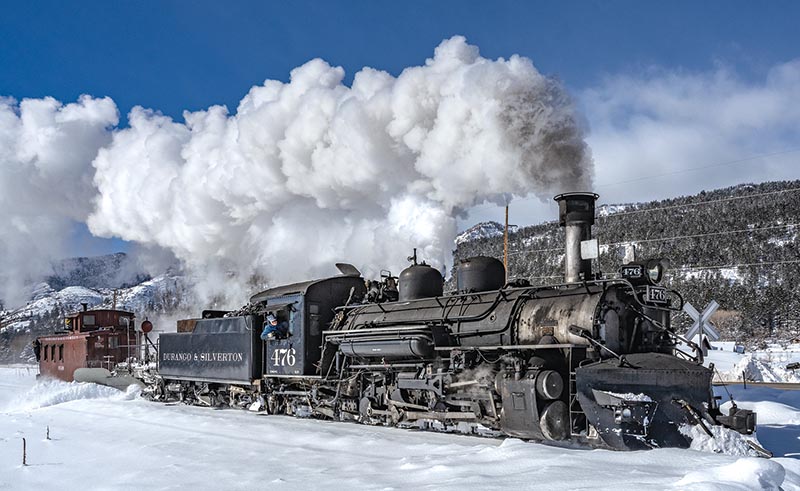 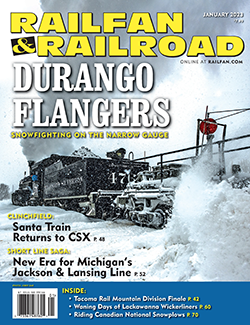 by Jerry Day/photos by the author

Removing snow and keeping the tracks open was a problem for Denver & Rio Grande Railway from its beginning in 1870. The diminutive three-foot gauge 2-4-0 and 2-6-0 locomotives were hard-pressed to push through the snow that accumulated on the high mountain passes. Rio Grande equipped the locomotives with home-made pilot plows and often used two or three on plow trains.

The pilot plows were effective in pushing snow from the tracks yet could not remove the hard-packed snow and ice from the flangeways, so in 1885, Rio Grande developed and patented a device for removing the ice and snow from the flanges. The December 12, 1885, issue of the Gunnison Review Press reported on the new contraption.

“Today the Rio Grande is experimenting with a patent machine for plowing the snow from the flanges of the rails. As is generally known, the common snowplow leaves a few inches of snow on the rails, which the engine wheels pack down so hard that the weight of the engines rests on the snow, and the flanges of the wheels are unable to catch on the rails. The new patent, known as ‘the snow flanger’ will be run over the track after the snowplow, and dig the snow from each side of the rail.” 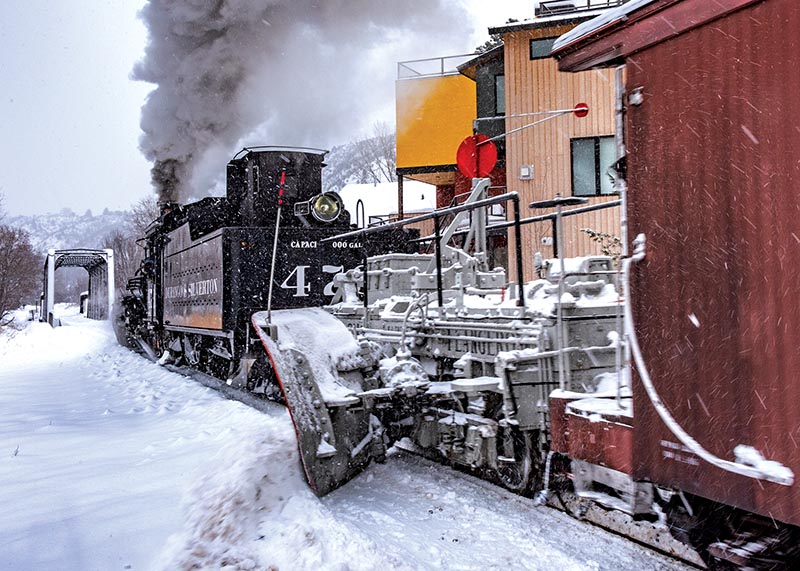 ABOVE: Plowing and spreading light snow, the train approaches Bridge 452.4 over the Animas River on January 24, 2017. The railroad refers to this as the 15th Street Bridge.

As the traffic on Denver & Rio Grande Western narrow gauge lines from Alamosa to Durango and Farmington declined in the 1960s with the end of the gas pipe traffic, Rio Grande stopped running trains over Cumbres Pass in the winter. The last Denver & Rio Grande Western narrow gauge flanger train ran from Alamosa to Chama and return on December 20 and 21, 1966. Rio Grande had also stopped running trains on the Silverton Branch in the winter. The last time D&RGW ran a flanger on the branch was April 12, 1965, when a work train with K-28 476 took flanger OD and a bulldozer to open the line so work on the new bridge being built at Elk Park could be resumed. 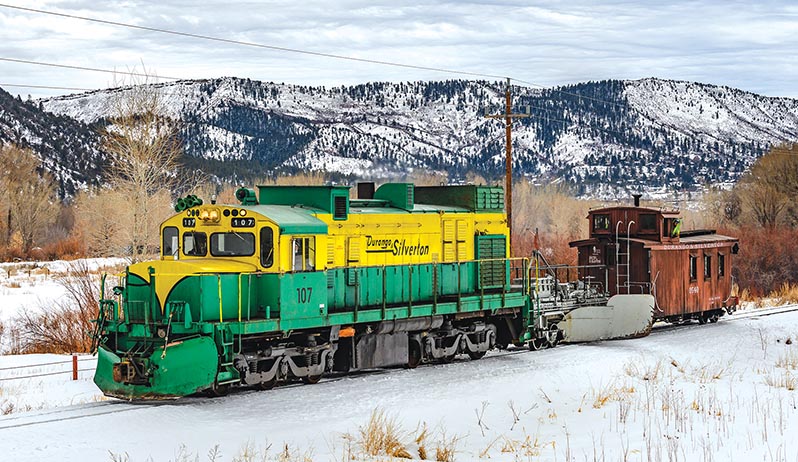 When Rio Grande abandoned the narrow gauge in 1968, three of the eight remaining flangers were sold to a scrapper, one was donated to the town of La Jara, one was sold to the Colorado Railroad Museum, and three were sold to the new Cumbres & Toltec Scenic Railroad that began operations between Antonito, Colo., and Chama, N.M., in 1970.

Denver & Rio Grande Western flanger OF was built in the Burnham Shop in November and December of 1885. OF was one of the three sold to a scrap dealer, who stored it on a siding on the west end of Chama, along with flanger OT. It was eventually sold to Cumbres & Toltec Scenic which resold it to Durango & Silverton Narrow Gauge Railroad in 1981.

Not long after Rio Grande had sold the Silverton line, Charles Bradshaw, the new owner, decided to operate trains in the winter to Cascade, partway up the 45-mile branch. D&S restored and repainted OF and put it into service in November 1981. The wings were extended or retracted manually and held in place with large brace rods. The process was slow, difficult, and dangerous for the crew, so in 1985, the D&S shop modified the OF’s wings to operate with air from two air cylinders that had been used as power reversers on K-28s 473 and 478. The system was set up so that it could be safely operated by an employee positioned on caboose 0505. 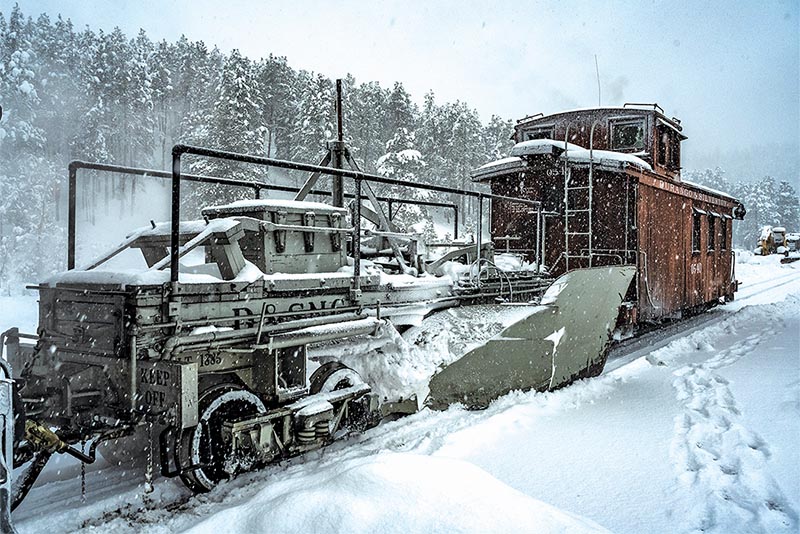 MIDDLE LEFT: Flanger OF has its extendable wings retracted when not plowing snow. It waits with caboose 0540 for authority from the dispatcher to proceed north of Rockwood on December 31, 2021.

Flanger Runs Through the Years
As a resident of southwest Colorado, I have been fortunate enough to see D&S use its flanger a number of times over the years. The railroad will usually send the flanger out after a big snowstorm, making it an unpredictable operation to see and photograph. Unless you’re a local, you’ll have to be very lucky or willing to hit the road quickly (in some questionable driving conditions) following a storm to see the flanger. However, the railroad has used the flanger on other occasions, too.

Most years, Durango & Silverton operates fall and winter special charter trains for railroad photographers. In 2012, D&S decided to do something special for its riders. It included flanger OF and caboose 0505 in the photo train on February 18. The flanger and caboose were coupled to the rear of the train. At several photo run-by locations, the passenger cars were sidetracked and the engine, flanger, and caboose simulated plowing and flanging snow…

Read the rest of this article in the January 2023 issue of Railfan & Railroad. Subscribe Today!