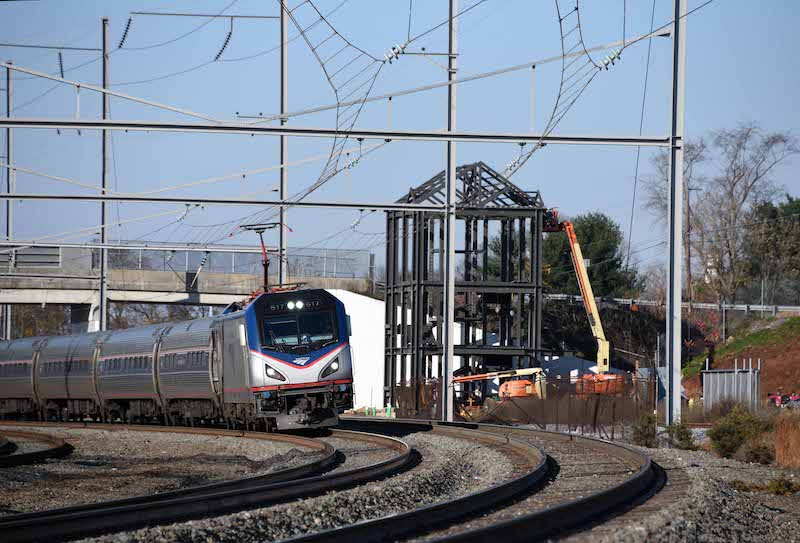 An Amtrak “Keystone Service” train headed from Harrisburg to Philadelphia and New York passes the new station going up in Middletown, Pa. Photo by M.T. Burkhart.

MIDDLETOWN, Pa. – Construction is finally underway on the long-delayed and much anticipated Middletown train station along Amtrak’s Keystone Line.

While track alignment for the middle island platform took place over the past year, steel for the $24.4 million structure itself started going up in recent weeks. Set to open in late 2021, it will feature high-level platforms, a pedestrian overpass and elevators. A parking lot with about 400 spaces is also in the works, according to PennDot, which is funding the station construction along with the Federal Transit Administration.

The current Middletown station along Route 441 was built in 1990 and is bare-bones – parking for 75 cars, a bus style shelter and low-level platforms on a super elevated curve. It’s also not ADA compliant.

A new station had been planned for at least a decade. Initially, it was to be built adjacent to the nearby Harrisburg International Airport terminal, but it was later decided to keep it closer to the Middletown business district and Penn State Harrisburg campus.

Site work at the West Main Street location started in 2016. Realignment was needed for the passenger tracks, catenary and neighboring Norfolk Southern freight line to accommodate the platform, according to PennDot. That work was completed over the summer.