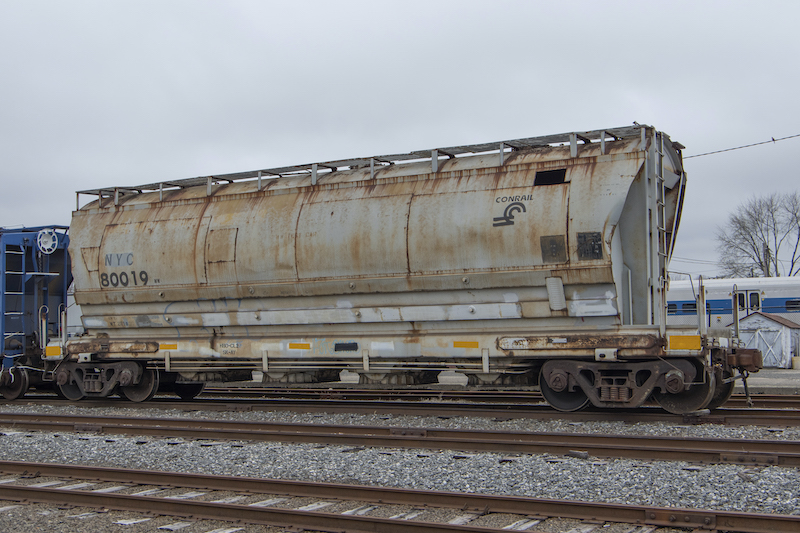 Former NYC hopper was converted into a scale test car and survived in service for more than 50 years. Photo Courtesy of CRHS.

DANBURY, Conn. — The Conrail Historical Society and the Danbury Railway Museum have teamed up to save a former New York Central “Flexi-Flo” hopper. The 46-foot car was built by ACF Industries in Milton, Pa., as NYC 885738. The covered hopper was one of 220 purchased by NYC and among the first built to include pressure differential technology. By applying air pressure to the inside of the car, the contents (typically cement or other dry bulk goods) could be easily unloaded into a nearby truck or storage tank. This technology was revolutionary in the rail industry, and it helped railroads recapture some of the business that was being lost to trucks and the interstate highway system in the 1960s.

After it was transferred to Penn Central, it was made into a scale test car. It was given a new paint scheme and a new number, 80019. It was later transferred to Conrail and painted gray. Most of the “Flexi-Flo” hoppers remained in service after the Conrail split in 1999. Most were scrapped in the 2010s, but 80019, which was still in scale test service, remained. In 2019, CRHS volunteers reached out to CSX about donating the car. After two years of planning and negotiation, CSX donated the car in January 2021. The car was moved to Danbury with the help of the Housatonic Railroad, Metro-North and CSX. The car arrived on March 30, the same day CRHS officially donated it to the Danbury Railroad Museum.

“We’re pleased that this collaboration has resulted in saving a one-of-a-kind artifact,” said Rudy Garbely, president of The Conrail Historical Society. “This hopper is an extremely rare and worthy candidate for long-term preservation, and the volunteers at both organizations have made an extraordinary commitment and effort to get it saved. There are many opportunities for cooperation and innovation in the preservation industry, and we look forward to a long and fruitful partnership with the skilled staff at the Danbury Railway Museum to tackle future projects of this magnitude.”