The history of commuter rail and the development of large American cities go hand-in-hand. As cities developed into dense employment centers in the 1850s, those who could afford it began to disperse to the bucolic fringes. Railroads realized that commuters were a market they could easily serve, sometimes even getting directly into the game of developing those suburbs into destinations.

Long before expressways and turnpikes came into vogue, trains served these suburban locations, creating a landscape of sedate bedroom communities and quaint passenger depots that contrasted with the gritty urban landscapes of the subway or the streetcar. The equipment scale is different too. Often operating with full-size locomotives and cars, commuter rail exudes a palpable sense of heft, one that I always read as having greater significance than other transit modes; it is the start of a journey rather than a short jaunt across town.

While it is difficult to imagine the New York or Chicago metropolitan areas without commuter rail, many other cities such as San Francisco, Boston, and Philadelphia have also been shaped by this essential service. Other cities are more recent converts, such as Miami (Tri-Rail, 1989), Seattle (Sounder, 2000), Nashville (Music City Star, 2006), and Minneapolis (NorthStar, 2009). More intriguing, perhaps, are those cities that had subsidized commuter rail that did not survive, such as Pittsburgh’s PATrain which shut down in 1989, or Detroit’s SEMTA service which sputtered to a halt in 1983.

Why do some operations thrive, while others do not? It might be tempting to blame design issues, such as the location of lines and stations, or the ease of basic system functions such as fares, ticketing, parking, and the like. You could also point to geographic and economic issues, such as the decline of most urban centers against the pressures of suburbanization and deindustrialization — Pittsburgh and Detroit are both good examples. 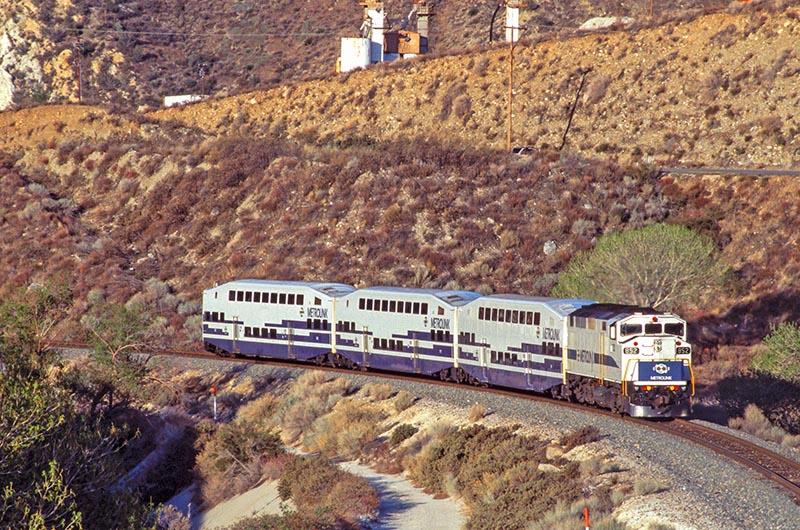 However, there are some systems that have neither good design nor obvious geographic advantages. The best example is Los Angeles’ Metrolink. Launched in 1992, Metrolink is a 534-mile system radiating out of Los Angeles Union Passenger Terminal (now Los Angeles Union Station). A recent visit gave me a chance to see Metrolink up close, and learn just how contradictory it is.
LAUS is a rich source of examples. Signage is poor, and boarding requires a separate paper ticket, negating the advantage of the regional TAP transit fare card. Adding insult to injury, the ticket machines are so outdated and counterintuitive that they require attendants to explain their function.

Metrolink’s geography is also mixed. While LAUS is adjacent to downtown and the offices on Bunker Hill, it’s a real hike in a city whose wide boulevards and spartan sidewalks are pedestrian-hostile. Besides, downtown L.A. has never exerted the economic pull of, say, Chicago’s Loop or midtown Manhattan. Metrolink’s outlying stations, meanwhile, are often located in an industrial wasteland of parking lots, nowhere near commercial or residential activity, with generally no transit-oriented development in sight.

For all these flaws, Metrolink manages to be a success. It ranks as one of the top ten commuter rail operations in the country, with nearly 40,000 weekday passengers. I think the reason why lies at commuter rail’s deep connection with American suburban life. The old joke that Los Angeles is 29 suburbs in search of a city, may, in fact, be the exact reason that Metrolink works. The tired worker taking solace in a quiet coach seat at the end of the day fits people’s image of the suburban ideal, and Los Angeles is nothing if not an attempt to create the world’s largest suburb.

What this adds up to is that when we consider why some commuter lines work and others don’t, we have to examine the context. Ultimately, success and failure do not occur in a vacuum. They are intensely local.

This article appeared in the January 2019 issue of Railfan & Railroad