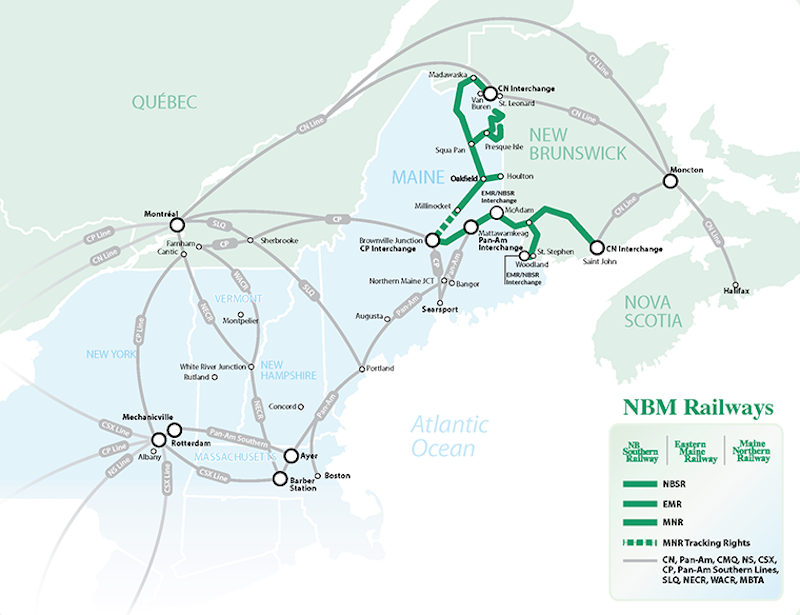 A system map of NBM Railways.

SAINT JOHN, N.B. — The Canadian government announced this week that it was going to spend more than $42 million on two different infrastructure projects: One to increase capacity at the Port of Saint John, N.B., and the other to upgrade the rail terminals at Saint John and McAdam on New Brunswick Southern Railway.

For the rail infrastructure project, the Canadian government will invest $21.1 million and NBSR’s owner, J.D. Irving Limited, will match it for a total investment of $42.32 million. The infrastructure projects come as the Port of Saint John positions itself as a central shipping hub that will soon have connections to not one, but two Class I railroads via NBSR and its sister operation, Eastern Maine Railways. Canadian Pacific interchanges with EMRY at Brownville Jct., Maine — thanks to its 2020 acquisition of Central Maine & Quebec — and within a few weeks, CSX Transportation will connect with it at Mattawamkeag following the Pan Am Railways takeover.

“These two projects located in Saint John and McAdam represent major opportunities to increase capacity to import and export goods in and out of New Brunswick. Our government is proud to support projects that benefit not only these areas, but all of New Brunswick—creating good jobs and contributing to a stronger economy,” said Minister of Transport Omar Alghabra.

Since CP reacquired CMQ in 2020 (Prior to 1995, the rail line was built and owned by CP), it has been promoting its connection to Saint John as the “East Coast advantage” over rival Canadian National. CP often notes in marketing material that its route is 200 miles shorter. Since 2020, CP has invested more than $90 million into the former CMQ.

“We are proud to be working closely with Port Saint John, DP World, J. D. Irving and the New Brunswick Southern Railway – building momentum in Atlantic Canada,” said CP President and CEO Keith Creel. “This strategic investment will help to improve the resiliency and competitiveness of Canada’s export-driven supply chains, and, combined with the increased competition generated by our return, help to transform Port Saint John into a truly global, premier trade gateway.”