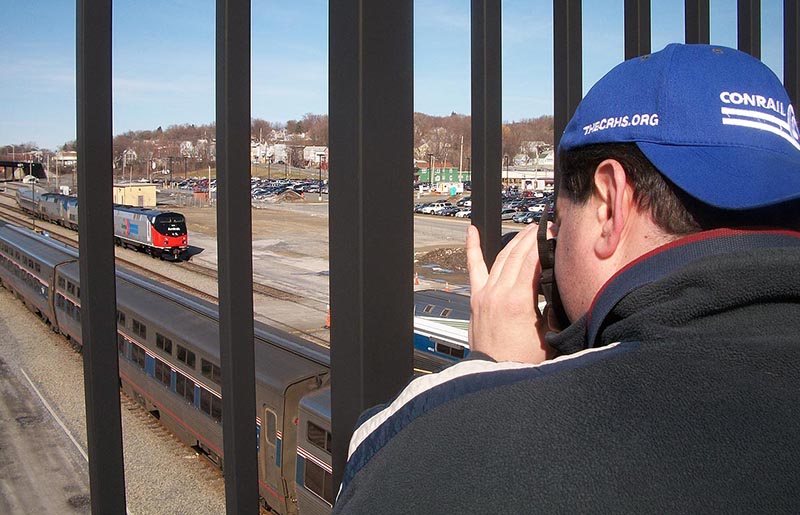 Photographer Josh Weis captures the arrival of Amtrak’s train 48, the Lake Shore Limited, with a freshly outshopped “Heritage Unit” on the point at Albany-Rennselaer, New York. This unit made its first daylight trip East on March 18, 2011, and only a few photographers were trackside to record the event. Sometimes the most important part of railfanning is simply “being there.” —Otto M. Vondrak photo 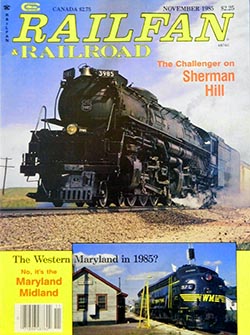 Somebody once said that the secret to photography is “f8 and be there.” From the standpoint of railfan photography, I’d change that slightly to “1/500th and be there” (I’m forever preaching that the high shutter speed is probably the singularly most important factor in developing good railfan photography habits). But the “be there” part is indispensable. You can’t get a great photo if you left the scene too soon and went off to a McDonald’s just before the clouds parted and the two sets of six-wheel truck Alcos met on Horseshoe Curve.

It’s the “being there” that we call railfanning. To get a great photo you have to put yourself in a place where the action is or where it will be when it happens (this is getting profound). All of our experience and acquired railfanning skills are utilized in putting us in the right place at the right time. We get to know how railroads operate by working for them, by observation, by talking to railroaders or by reading books and magazines. Those with experience will be able to encounter a railroad situation, evaluate the available information (either from visual observation, from talking to a railroader or by listening to a radio scanner) and anticipate what will happen. His odds of being correct will be pretty good, while the inexperienced railfan is likely to miss the clues and get flim-flammed. To learn these railfanning skills requires time in the field, making judgements, making mistakes and learning how the railroad world works. That’s the sport of railfanning. As a beginner, don’t be discouraged if everybody else seems to know where to go and you don’t. Follow the crowd until you figure you can make better choices than they do. But first, you have to “be there.”

Artistic and camera skills can be put to work only after you have gotten to know your subject — anyone can walk into a railroad yard or weekend tourist line and take dramatic or artsy “train shots;” the camera club galleries are full of them. But to get photos that highlight the subjects that will be of interest to other railfans, you have to know what to look for. This is another way of saying that you have to know your audience. If your peer crowd is into roster photography, you’d better not come back with shots taken at noon in the summertime when the all-important trucks are in shadow; you would know to work in the morning or the evening hours when the light is right. You have to “be there” at the right time.

This goes for action photography as well. You can’t control the light and environment, but you can judge in advance whether the composition and lighting will be right for a given situation: Maybe you’d be better on the other side of the track… Maybe you should go around the next curve where the light will be on the nose… Maybe you should even resort to the “dark side” for dramatic crosslighting. It’s all part of the game.

So now you’ve gotten pretty good at railfan photography and want to take the next step, sending your photos into a magazine for publication. “This is a great shot. It’s as good as anything I’ve seen in that rag of Boyd’s. Let’s go for it!” So you send it off, wait a year, send Boyd a nasty letter or two demanding your slides back and wonder what happened. It’s like being rejected by a girlfriend. You feel you’re not good enough to break into the “in crowd.” Maybe you should just go home and watch MTV. “Being there” didn’t work.

As one who spent a decade as a contributor long before becoming an editor, I know how you feel. But there’s nothing to be discouraged about. When it comes to getting your photos published, you have to “be there” trackside at the right place and time, and you have to hit the editor at the right time with just the right subject. That’s a lot harder to do, because even he can’t tell you in advance what is needed. And a lot of damned fine photos will never see printer’s ink. It’s not because they were bad or unworthy; it’s usually just that the timing was wrong. I recently received a beautiful vertical photo of N&W 611 crossing a little bridge in perfect light, surrounded by West Virginia hills. That would have been a cover shot if I’d had it at the right time, when we had a feature going on the 611. But we’ve got nothing on the 611 in the works right now, and that perfect cover photo will be a reject because we have no need for it now.

There is an “in crowd” here, but it’s open to anyone willing to join. The regular contributors are regular contributors because they get out there and hustle. They supply me with good quality slides or b&w’s while the news is still hot, and they include enough data on the story so that I don’t have to get bogged down in researching or verifying their material. And I’ll give a new name a chance over an old one if the material is equal — the “regulars” see their name in print enough to be able to live with that. Of course, if somebody makes a special, pre-arranged effort, like Dave Lustig and Tom Savio using the telephone and Federal Express to get the SPSF SD45s to me just under the deadline. I’ll make sure their work is published, even if somebody else should happen in the meantime to bang in a lucky shot.

Some of the choices being made by magazine editors — and that includes all of ’em, not just me — can be pretty arbitrary. A photo might make it into Photo Line simply because its a diesel shot with a narrow crop that faces left or is a strong, square image that will anchor the corner of a layout. It could also be because it is a simply stunning image (like Mike Eagelson’s 611 on page 46) that struck the editor’s fancy and served as a keystone for a photo layout. The point is that “good enough” has little to do with your skill as a photographer, for the resulting photo has to “be there” with the right subject, image and shape at the right time. When it comes to shooting photos for publication, the work at trackside and in the darkroom are only the first moves in the game.

If you really want to get your photos published you have to be like Captain Kirk in The Wrath of Khan: If you can’t win by the rules, you change the game. Instead of blindly submitting photos, try for feature articles. It’s more work and no guarantee of success, but the odds and rewards of winning are higher. If you have an idea for an article, contact us and we can discuss it. I won’t give a guaranteed commitment to an unknown author, but I’ll be glad to discuss your idea. That’s how the pros do it.

There are all sorts of places in the railroad world worthy of photos or features, and whether you just want pictures for your own scrapbook or the cover of a national magazine, first you gotta “be there.”