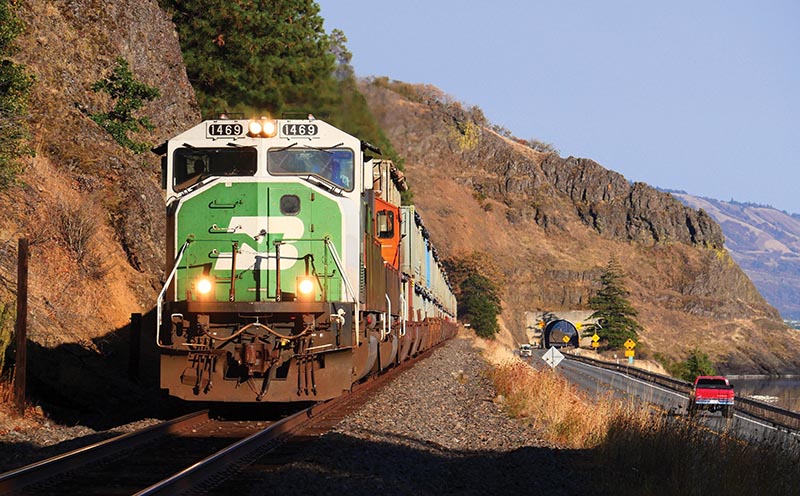 BNSF Railway 1469, a two-window SD60M, leads an empty H-ROOEVE (Roosevelt–Everett) west through the basalt rock tunnels west of Bingen, Wash., on the sunny afternoon of September 30, 2020. 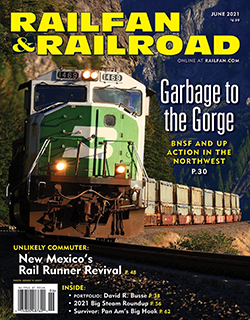 By Robert W. Scott/photos by the author

“Stinky Roo.” “Sea Gull.” Or simply the “trash train.” They’ve been called many things by many people, but when you hear a Northwest railfan utter any of those phrases, you know they can only be talking about loads of municipal trash from all over the Pacific Northwest that ends up being transported by rail to two landfill locations on either side of the Columbia River Gorge in Washington and Oregon.

The eastern end of the Columbia River Gorge was selected for two landfill operations as they are located on the “dry side” of the Cascade Mountains and receive a minimal amount of annual rain. The local geology is also an ideal location for a landfill as there are natural barriers to prevent runoff from entering aquifers or into adjacent soils. These sites, located on the sparsely populated end of the gorge, also have ample room for future expansion.

BNSF Railway and Union Pacific garbage trains have been running for more than 30 years from the Seattle area. Both railroads move container trains loaded with waste south on BNSF’s Seattle Subdivision (UP has trackage rights on this line) before heading east through the Gorge on their own lines — BNSF on the north side and UP on the south side. Each railroad has contracts with different companies to move garbage, resulting in six or more trains per day along the main lines of the Pacific Northwest. 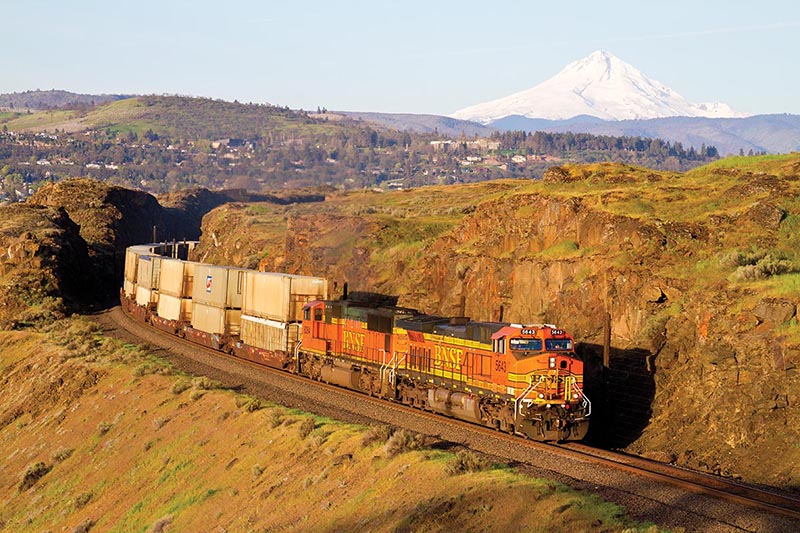 Sunrise meets eastbound garbage load H-INBROO as the train passes through the 15 million-year-old basalt rock outcroppings at North Dalles, Wash., with The Dalles, Ore., in the distance across the river. Oregon’s Mount Hood anchors this shot on March 25, 2014.

BNSF Railway
BNSF’s trash trains end up at the Republic Services regional landfill at Roosevelt, Wash. (population 156), the fourth-largest of its type in the U.S., about 140 miles east of Vancouver, Wash. BNSF collects trash at nine different regional collection points around the Northwest that can include trash from Canada and Alaska. Multiple local trains and yard jobs handle garbage containers that are forwarded to build two daily loaded trash trains for BNSF. The railroad symbols its trash trains as “H” trains or high-priority, usually the H-INBROO (Seattle Interbay Yard–Roosevelt) and the H-EVEROO (Everett–Roosevelt). Each train averages about 300 double-stacked trash containers with each container weighing an average of 48 tons completely loaded.

Republic Services covers municipal garbage service for nearly three-quarters of all households in Washington state. Sixty percent of the trash is derived from municipal solid waste with the remaining 40 percent split evenly between debris from construction/demolition and contaminated soils, known as “dirty dirt.” The trash from the Spokane area is also forwarded to the Roosevelt site and those trains include ash from trash incinerators that are in use there. Those cars are placed in existing trains or are handled in occasional unit trains from Spokane to Roosevelt. 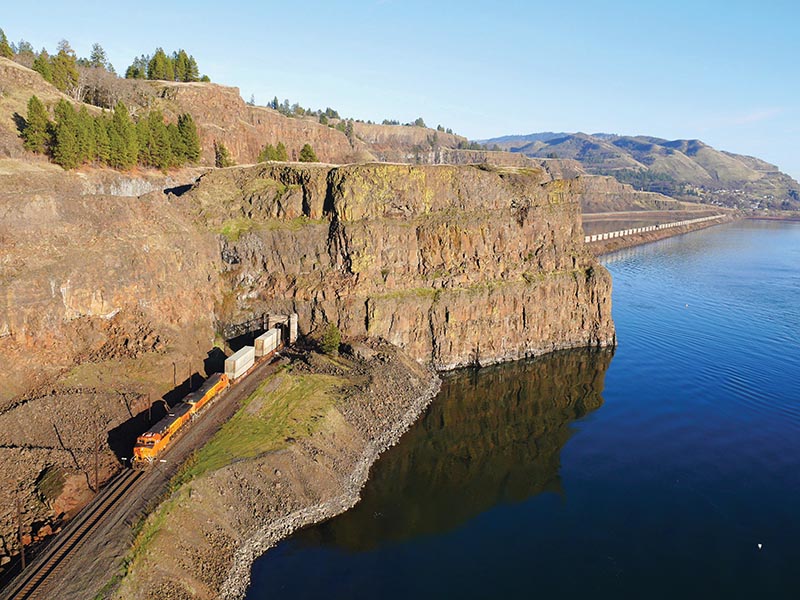 Ducking through the basalt rock at Lyle, Wash., is westbound garbage empty H-ROOINB, nearing sunset on January 13, 2018. A bit of light hiking is required for this photo location, but one wrong step and it’s 300 feet to the river below!

Upon arrival at Roosevelt, the containers are taken out of the well cars and trucked the final few miles up to the landfill. After trash trains have been unloaded at Roosevelt, the empties head back west through the gorge and back north toward Seattle…

Read the rest of this article in the June 2021 issue of Railfan & Railroad! Subscribe today!