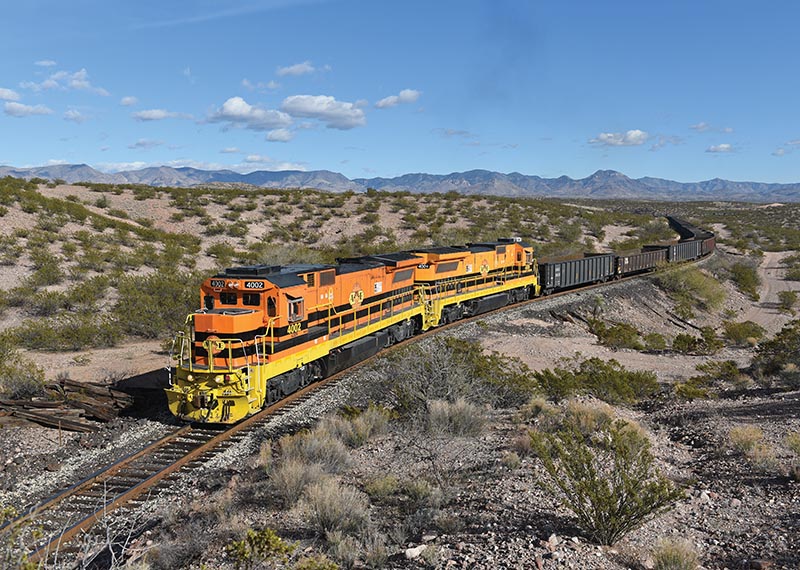 Arizona Eastern 4002 departs South Siding with the last trip of the day, empties for the Morenci mine, on December 18, 2019. Soon this train will leave the high desert behind, winding down the San Francisco River Canyon to Clifton. 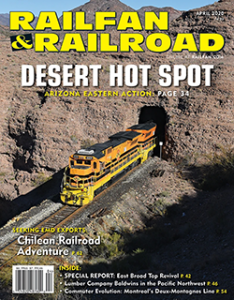 By Ben Kletzer/photos by the author

Tucked away in the eastern edge of Arizona, deep in the mountains of the Sonoran Desert, lies a hidden railroad gem, the town of Clifton. While most railfans have never heard of Clifton of of the neighboring company town of Morenci, they are the site of the largest copper mine in North America, a place of global economic importance. Two railroads meet in Clifton to serve these vital industries, Arizona Eastern Railway and Freeport-McMoRan Industrial Railroad, making the small town one of the busiest interchanges in the Southwest. Every day, the red rock canyons echo with the sound of diesel locomotives hauling 80-car trains uphill. And these are no mere hills — the industrial railroad boasts an over 5 percent grade, the steepest operating freight railroad in the nation and climbing more than 1,200 feet in six miles.

140 Years of Railroading
The history of railroads in Clifton is linked to the history of copper mining in the region. Copper was first discovered in Chase Creek canyon at the townsite of Clifton in 1870, and by 1872 several mines were operating in the surrounding hills. Mules and oxen soon proved ineffective for moving the great quantities of iron ore to the new smelter at Clifton, and in 1879 Coronado Railroad opened, a connecting mine to smelter. Built to 20-inch “baby” gauge, a fleet of 0-4-0 Porter tank locomotives was the primary power. By 1884, there were dozens of mines, all connected by a growing network of baby gauge rails.

However, getting refined ore from deep in the mountains to the outside world remained a challenge. In 1883, Arizona Copper Company chartered Arizona & New Mexico Railway to build a three-foot gauge railroad from Clifton to the Southern Pacific Sunset Route at Lordsburg, N.M. Despite the difficult terrain, the narrow gauge line was completely opened in just over a year. The opening of the common carrier railway intensified the copper boom, and as American cities electrified, the demand for copper skyrocketed. By 1901, Arizona & New Mexico was completely rebuilt as a standard gauge railway, interchanging cars directly with the giant Southern Pacific system. 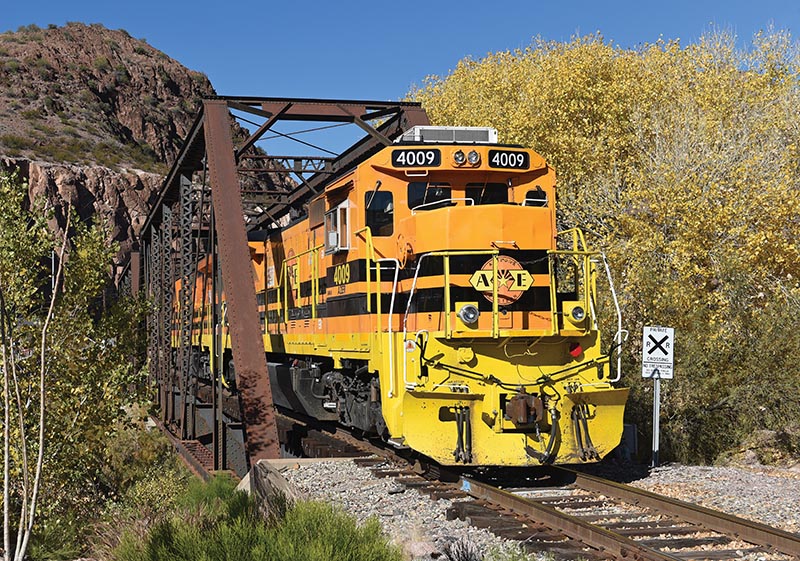 The 203 job drifts across the San Francisco River bridge while switching in Clifton on December 20, 2018. The river is prone to severe flash floods, and this is the third bridge that has stood at this location.

Just as standard gauge railcars reached Clifton at the turn of the last century, connecting railroads were built to reach Morenci, high up in the mountains above Clifton. First, the spectacular three-foot gauge Morenci Southern Railway was built, taking advantage of the topography and bypassing Clifton to meet A&NM at the siding of Guthrie. Morenci Southern was a fantastic railway, originally built with five full loops to conquer the steep terrain. At the same time, Shannon-Arizona Railway was built, departing from Clifton on a steep 5 percent grade, to reach the Shannon smelter and then the mines. These lines were all interconnected, forming a network of hundreds of miles of narrow gauge rails serving dozens of major copper mines.

The drive to electrify the U.S. kept the copper boom going through World War I, but the postwar depression and a record fall in copper prices led to many mine closures in the Morenci area, and a decline in the once-thriving copper industry. In this economic downturn, consolidation was the answer for survival. Phelps Dodge Corporation was the result, with three separate copper companies, each with their own mines and railroads, becoming one in 1922. As part of this expansion, A&NM became part of Phelps Dodge’s El Paso & Southwestern Railroad, then became a branch line of the mighty Southern Pacific upon the lease of EP&SW in 1924.

Freed from common carrier obligations, Phelps Dodge set about consolidating the mine railroads into one line, Morenci Industrial Railroad. Morenci Southern and Shannon-Arizona were combined, directly connecting the Morenci mine with SP in Clifton. What remained of the earlier lines was abandoned, leaving a busy 10-mile narrow gauge railroad powered by 2-8-0s working around the clock serving the consolidated mines. However, the mining recovery was short, and the entire operation including the railroad was shut down in 1932, remaining closed for five years. 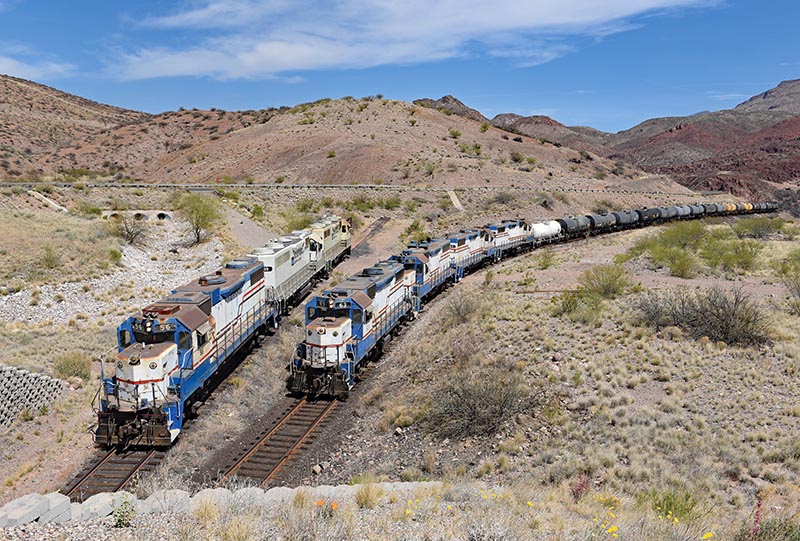 Freeport-McMoRan GP39-2 63 accelerates up the steep grade out of Clifton while three units wait in the runaway track for the train to pass on March 29, 2018. Soon the other units, led by GP38-2 56, will head into Clifton to retrieve the second half of the inbound cars for Morenci.

In 1937, Phelps Dodge reopened the Morenci operation with a huge expansion, beginning open pit mining at the townsite of Morenci. To serve the new massive open pit mine, Phelps Dodge constructed a modern electrified standard gauge mine railroad, while also completely rebuilding the connecting industrial railroad to standard gauge. While the route was rebuilt into a heavy industrial line, it remained the same, climbing up the steep grade out of Clifton using switchbacks and sharp curves. A new reduction works and concentrator were built, and a new company town of Morenci was built at the end of the industrial line.

The Morenci Mine and smelter began full operations right at the start of World War II, fortuitous timing for Phelps Dodge, as the war brought huge demand for copper. The mine and railroad expanded dramatically through the war and into the 1950s. Electric operations ended in 1955.

The pit mine grew to a massive operation with over 90 miles of track and ABS signals guiding trains that were largely controlled remotely. As mine traffic increased, the old narrow gauge route from Shannon Hill utilizing the switchbacks was increasingly incapable of handling the traffic. In 1965, a new four-mile-long line relocation opened, with 3 percent grades and reduced curves; this line forms the bulk of the current Morenci Industrial Railroad. However, the 5 percent grade up Shannon Hill remained, on the same torturous alignment as built in 1901. Yet, as the mine expanded into three interconnected pits, it outgrew the railway system, and the last pit trains operated in 1986, replaced by a fleet of massive off-road trucks. 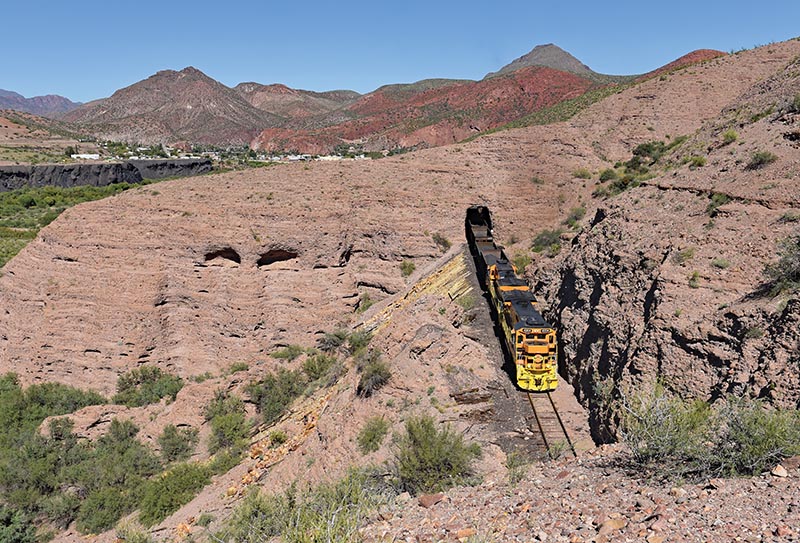 Arizona Eastern 4004 storms out of Tunnel 1 and into Tunnel 2 with a heavy train of copper concentrates. The climb out of the San Francisco River Canyon is marked by these vistas, as the track clings to the sandstone cliffs above the river.

Throughout these changes, Southern Pacific continued to operate the ex-A&NM, now the Clifton Branch. Freight traffic was the priority, as heavy mine equipment was brought in for the Phelps Dodge pit, and billions of tons of copper brought out. Despite the importance of the Morenci Mine, this was the backwater of the SP system; mixed train service continued until 1967, and there were few improvements to the old narrow gauge route. However, train service continued; throughout the remainder of the SP era, there was daily service from Lordsburg, N.M., to Clifton connecting with the bustling Phelps Dodge Industrial Railroad.

The turn of the 21st century was the start of a period of great change in Clifton and Morenci. With the Union Pacific-Southern Pacific merger, the branch line became UP’s Clifton Subdivision, but the larger carrier wanted to shed the increasingly rickety branch. The neighboring Globe Branch became the Arizona Eastern Railway (AZER) in 1988, and in 2008 UP sold the Clifton Sub to AZER. Iowa Pacific, then-owner of Arizona Eastern, used federal and state funding to rebuild the Clifton Branch, replacing ancient stick rail with heavy welded rail and good ballast. This rebuild process was underway when AZER was sold to Genesee & Wyoming, which has continued to pour millions of dollars into rehabilitating this profitable short line.

In 2007, Phelps Dodge was taken over by Freeport-McMoRan, with mine operations expanding under the new ownership. Paralleling developments with G&W, Freeport invested heavily in expanding the production of the Morenci Mine complex, now the largest copper mine in North America. New copper processing techniques replaced smelting, a new mill was opened and now, production has reached an all-time high of more than one billion pounds of copper annually. Furthermore, the copper mine was integrated with Freeport’s other operations, requiring greater use of the railway to haul inter-factory traffic… 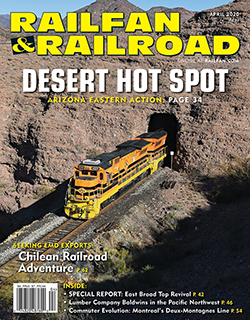 Read the rest of this feature in the April 2020 issue of Railfan & Railroad!