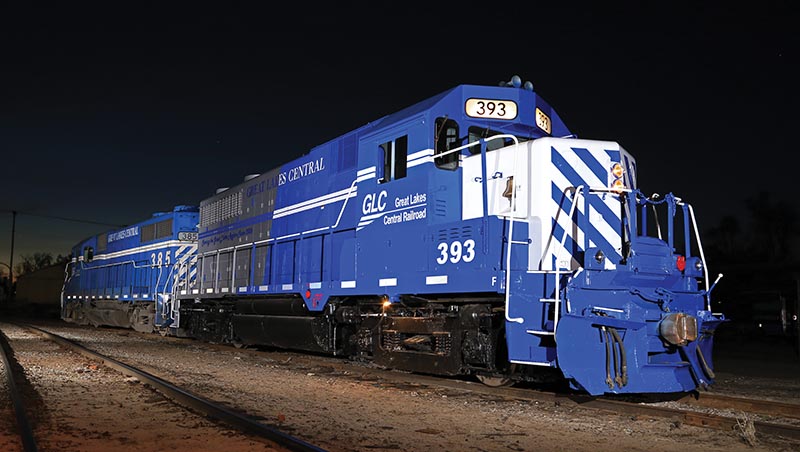 By Steve McKay/photos by the author

Great Lakes Central, based out of Owosso, Mich., operates roughly 475 miles of main line track crisscrossing Michigan’s heartland. The railroad consists of pieces of former Pennsylvania, New York Central, Grand Trunk Western, and Pere Marquette, and the majority of the former Ann Arbor Railroad, crisscrossing Michigan’s heartland. Michigan Department of Transportation contracted with Tuscola & Saginaw Bay (TSBY) to operate lines formerly owned by Ann Arbor. In 2006, the railroad was sold and its name changed to Great Lakes Central, which then operated more than 400 miles of track across the state.

Riding on traded-in trucks built at the end of 1950 for Ann Arbor’s fleet of 12 Alco FA-2s (50/50A–56/56A) and sporting EMD 567D prime movers, Great Lakes Central’s six remaining former Ann Arbor EMD GP35s are still hauling freight for the line for which they were initially built and have remained on for the last 56 years. I grew up watching and riding the GP35s pulling freight through Owosso throughout the 1990s and early 2000s. The railroad ran only a couple of blocks from my house, but that wasn’t the main reason these GP35s were such a big part of my life. Both my grandfather and my dad worked for TSBY during this time, meaning I lived, breathed, and sweated GP35s.

More Power
In 1964, Electro-Motive Division of General Motors built 10 GP35s for Ann Arbor to haul local freight and through traffic from Toledo, Ohio, to the car ferry slip in Elberta, Mich., on the eastern shore of Lake Michigan. Numbered 385–394, they were delivered in the orange color of AA’s then-parent Detroit, Toledo & Ironton, with large block lettering adorning the long hood. DT&I assumed control of Ann Arbor in 1964 when then-owner Wabash was acquired by Norfolk & Western. 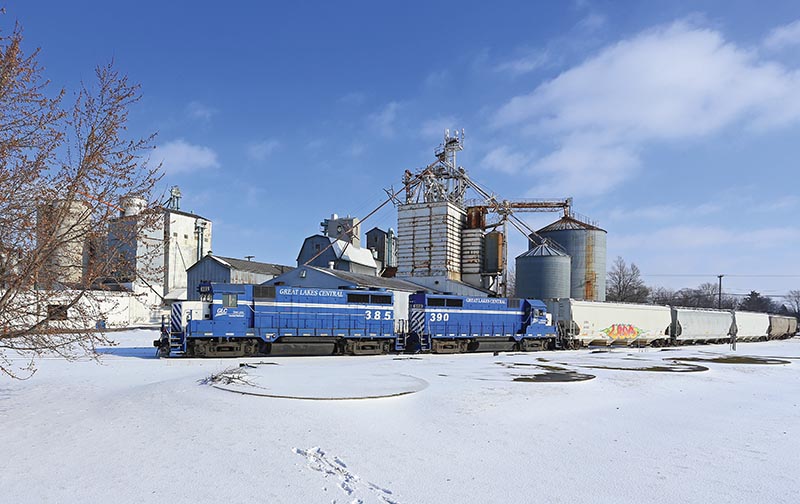 ABOVE: GLC 385 and 390 roll through Ithaca as the sun finally gets a chance to break free from the clouds and shine down on the ex-Annie 35s on January 8, 2018.

Upon delivery to Ann Arbor, the 10 GP35s were quickly put into road service running between Toledo and Elberta. Normal operations would find two or three engines leading the northbound trains to the boat landing in Elberta, but four or more would lead the return trip due to the steeper southbound grades. One of the worst grades is Boon Hill (west of Cadillac) that would have the heavy train, consisting of mainly loads, down to its knees. This hill remains the biggest obstacle to get loaded sand cars out of the Yuma sandpit, but this section of railroad is currently out of service due to the downturn and closure of the pit.

The GP35s would venture from home rails on occasion, running DT&I trains down to Cincinnati or fast freights across Conrail’s busy main line between Toledo and Cleveland. Some even made it out to the Pittsburgh area. Over the years, the 10 units would be owned by and operated under several different railroads and names, but they would remain on their home road. 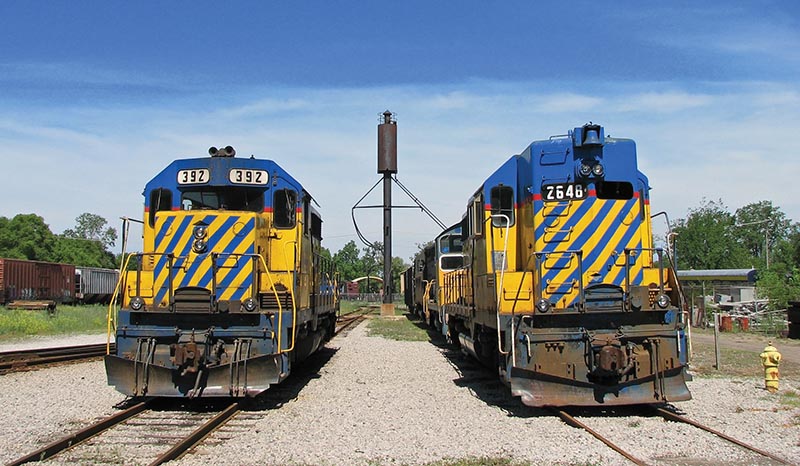 Conrail took over on April 1, 1976, and in October 1977, Ann Arbor would be transferred to the state of Michigan and be called Michigan Interstate; this would end up being another short but hostile time for the railroad. In March 1981, the contract between the state of Michigan and Michigan Interstate expired and, after a few failed attempts to create a new contract, the railroad would be split into three sections. The northern third was briefly handed over to Michigan Northern and the middle third was operated by the new TSBY, which had a small operation in Michigan’s “thumb.” The third and southernmost section would be handed to the new Ann Arbor Railroad that would operate from Osmer to Toledo.

During the contract negotiations and an ensuing lawsuit, Michigan Interstate brought the eight operating GP35s to Toledo where they were held captive for money owed to the railroad by the state. The settlement resulted in the eventual return of the eight locomotives to the state and to the new operator, TSBY.

The TSBY Era
With Tuscola & Saginaw Bay now in control of the former Ann Arbor main line, TSBY would utilize the eight working GP35s as the road’s sole power. The two out-of-service locomotives, 386 and 387, were used as parts sources to keep the others running. The 387 at one point had received a rebuild at Peaker Services in Brighton, Mich., but never saw operation after that. The 386 would meet its fate in 1986 to the smoke wrench, and the 387 would last in the deadline until 2006. The 387 was cut up, along with ex-Southern 2674 and 388 (which had hit a milk truck outside of Alma, Mich., in the early 2000s and was wrecked beyond repair). 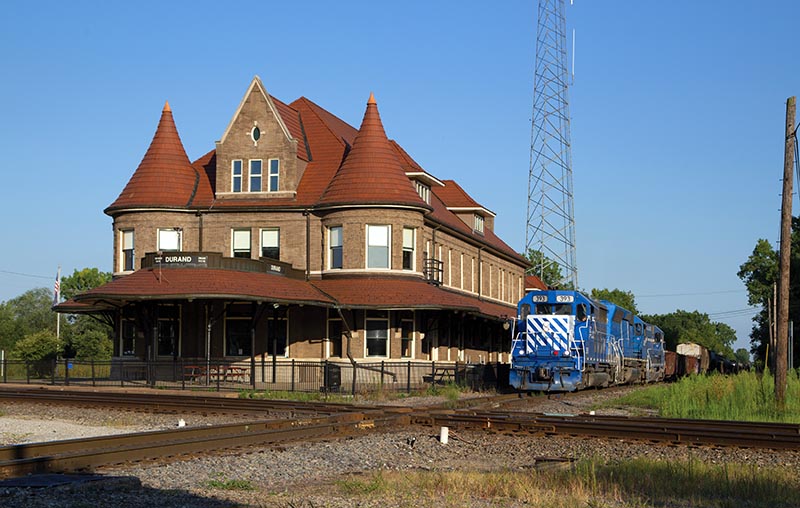 In the mid-1990s, TSBY purchased four ex-Southern high-hood GP35s (2646, 2648, 2674, and 2681) to help with increasing business. The four 2600s also rode on Alco trucks, meaning that except for the high-hoods they were basically the same locomotives as the GP35s already on the roster. The 2646 would not last very long on the railroad before being sold, ending up on Eastern Idaho Railroad. The 2648 was the only one of the four to receive TSBY’s classy bright yellow, blue, and red paint scheme and would operate until early 2006 when it was sidelined and used for parts. The 2674 to my knowledge never operated on the railroad and was used as a parts source for the entirety of its remaining life, sitting in a deadline with 387. The final of the four was 2681, wearing an all-black paint scheme with a small “TSBY” under the cab windows. The engine would operate until early 2007 when it was finally taken out of service and used to keep the remaining seven GP35s in operating condition. The 2681 and 2648 were scrapped in 2018, along with 389 which had been out of service for a few years and deemed unrepairable.

Under TSBY’s control, “Annie Orange” paint would start to fade away into black patches and new schemes. The first scheme that TSBY introduced was dark yellow with black nose stripes and a black stripe down the top of the sides, which was worn by 385 and 388. The second scheme was inspired by West Virginia University, where owner Jim Shepherd had gone to school. The scheme had the same yellow but with a dark blue replacing the black and added a red stripe separating the black hood stripe and the yellow sides. The third and final TSBY paint variation, which would end up on most of the 35s, was the same yellow, blue, and red, but was several shades brighter and seemed to hold up better…

Read the rest of this article in the July 2021 issue of Railfan & Railroad! Subscribe today!