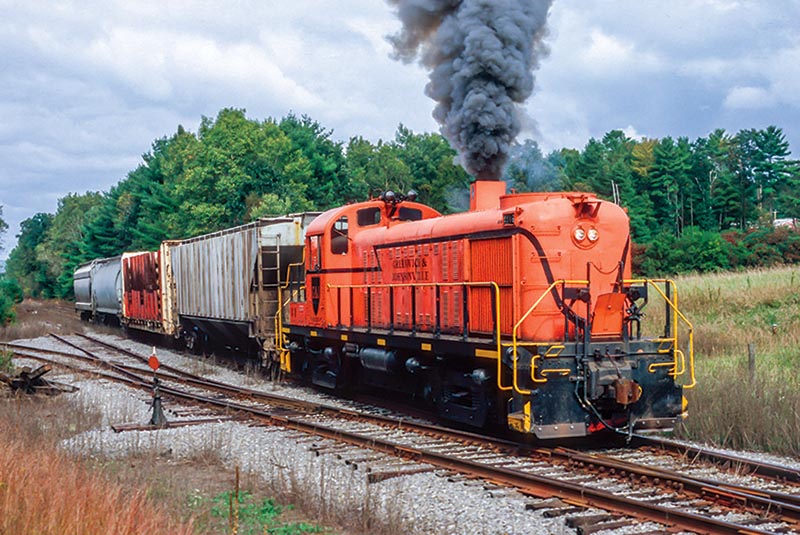 American Locomotive Company is one of the oldest and most fan-beloved of locomotive makers. Founded as a merger of several separate companies in 1901, Alco became the second-largest engine builder in the U.S., behind only Philadelphia’s Baldwin. When railroads began to switch from steam to diesel power in the 1930s and 1940s, Alco made the transition as well.

Its accomplishments are significant. In 1932, it introduced the first practical end-cab diesel-electric switcher, the HH-600. Nine years later the company released the RS-1, the world’s first diesel-electric road switcher, a form that in many ways is still visible in today’s locomotives. By the end of the 1940s, major railroads were scrapping massive steam locomotives, sometimes just a decade old, and replacing them with four-unit sets of Alco FAs.

Yet Alco isn’t around anymore — the main plant in Schenectady, N.Y., turned out its last locomotive in 1969. Many factors led toward this demise, but the largest was probably the slow termination of Alco’s long partnership with General Electric. GE provided electrical components, as well as design and engineering expertise. By 1953, however, GE was building its own locomotives, first for the export market, but later for the domestic market as well. Alco now found itself in direct competition with its former partner, while also competing with Electro-Motive, Lima, and Baldwin for a slice of the postwar diesel market.

Notoriously, Alcos billowed black exhaust plumes — unburnt fuel dumped into the atmosphere — to the delight of fans who dubbed them “honorary steam locomotives.” To railway accountants, as well as anyone in the public who valued their lungs, this was not so endearing. Meanwhile, the lack of GE components exasperated roundhouse foremen across the country, forcing them to stock parts for yet another electrical system. Things got so bad that, in 1964, the company was forced to return to GE components to avoid losing sales. As the decade drew to a close, and competitors launched ever larger and more powerful locomotives, Alco did its best to keep up. Innovation often took the form of crudely reverse-engineering the designs of others. Alco’s “Hi-Ad” truck, introduced in the mid-1960s, was essentially a knock-off of an EMD design.

Where in the 1950s, an Alco diesel might sell in the hundreds or even break past the thousand mark, by the mid-1960s the situation was quite different. General Motors’ EMD GP35, capable of 2,500 hp, sold more than 1,300 units. GE’s U25B, with the same horsepower rating, sold almost 500 units. Alco’s comparable C-425? Ninety-one. This made for rarity, another way to a fan’s heart, but it made for thin profits and a bleak future for the company that built them. The most notorious failure, though, was the company’s brutish C-636 model. Introduced in 1967 and capable of 3,600 hp, this was Alco’s last attempt to remain relevant. At great cost, the company built a set of three engines on spec, and then toured them around North America, lending them to potential customers for evaluation. Instead, they became advertisements of how poor Alco’s design and build quality had become, breaking down more than once. In 1967, orders were mighty scarce. Two years later, they were nonexistent, and so was the company.

Given that Alcos were cantankerous, dramatic, and rare, when a railway actually liked them, that company instantly became more interesting for railfans. Alcos exude an underdog quality, and following the builder’s closure, that only increased. There’s no getting around it — the Alco is our favorite failure.

This article appeared in the October 2022 issue of Railfan & Railroad. Subscribe Today!