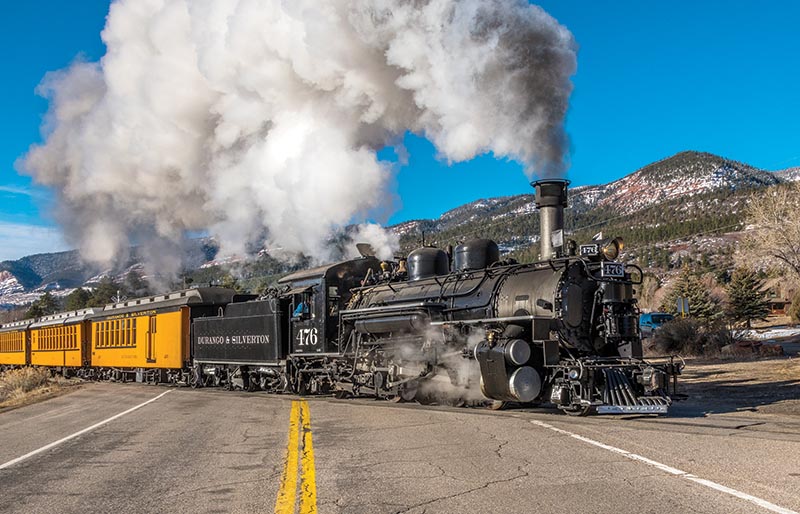 Newly rebuilt engine 476 roars across the U.S. Highway 550 crossing at Hermosa, Colo., 11 miles from Durango. The grade rises to a steep 2.5 percent at this point and the locomotives really begin to work hard, as seen on February 18, 2018. 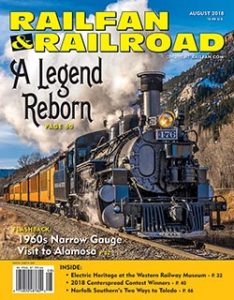 By Jerry B. Day/photos by the author

The Denver & Rio Grande Western Railroad faced a dilemma as it approached the mid-1920s. The narrow gauge portion in southwestern Colorado and northwestern New Mexico was rapidly aging and deteriorating. Its newest locomotives, the Baldwin Class K-27 2-8-2 “Mudhen” Mikados, were 20 years old and underpowered. The Rio Grande had several options — convert the lines to standard gauge, abandon many of them, or upgrade the motive power and track structure.

While traffic on many of the branch lines did not justify conversion or upgrading, the coal traffic from mines around Crested Butte, Colo., was increasing, and a new oil refinery opened in Farmington, N.M., in 1924. The D&RGW had considered standard-gauging the main narrow gauge routes during World War I, but upgrading the main line over Solider Summit in Utah took priority.

After considering all the options, the board of directors decided in 1922 to upgrade the narrow gauge by acquiring new motive power and rebuilding the track and supporting structures. Rio Grande placed an order with American Locomotive Company (Alco) for ten outside-frame 2-8-2 locomotives, numbered 470 through 479. When it placed the order, the railroad was using a classification system based on weight. The ten 470s were delivered as Class E-4-148-S. Shortly after their arrival, the D&RGW switched to a new system based on tractive effort and the ten were reclassified as K-28 — “K” for Mikado and “28” for the 27,500 pounds tractive effort. 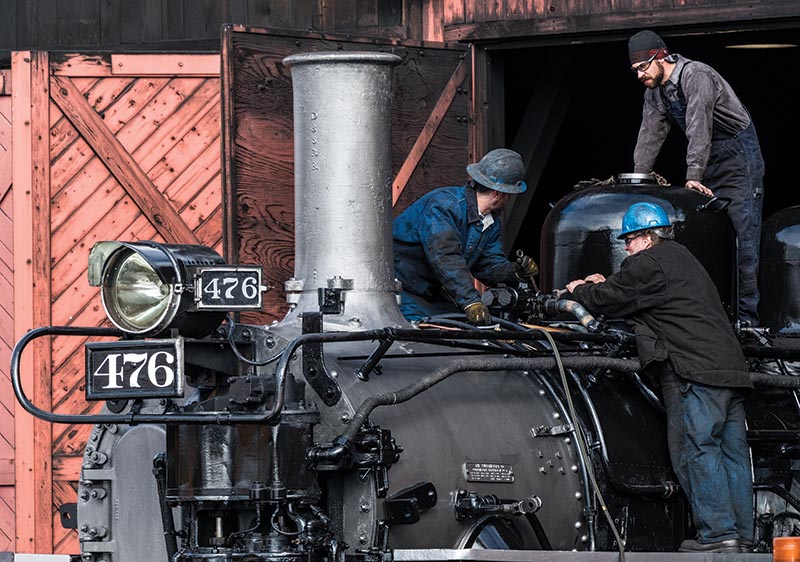 Each new engine was delivered on standard gauge flat cars to Salida, Colo., in September 1923. After being prepped by the Salida shop, they were sent out on test runs over Marshall Pass, with 473 the first to be tested on October 2. Most of the K-28s were placed in freight service over Marshall Pass to Gunnison with 479 used on the passenger train over the same pass. The D&RGW attempted to put them in service over Cumbres Pass from Alamosa to Durango, but the trackage on that portion of the narrow gauge had not been upgraded. After a number of derailments with 471 on the Durango passenger run, the K-28s were pulled off until the track was rebuilt and upgraded in 1924 and 1925.
The K-28s were very popular with engine crews as they were smooth riding and fast running. A popular automobile at the time was the Stutz Bearcat sports car, known for its low weight and fast speed. The crews thought the appearance of the engines with the front-mounted air pump and low-slung cab was sporty, and gave the K-28s the nickname “sport models.”

The earliest record of locomotive 476 in service came from the Marshall Pass train register showing it in freight helper service with number 475 on December 7, 1923. Eastbound freight trains (mostly coal from Crested Butte) out of the Sargents helper station required three locomotives. Typical was an eastbound freight on December 27, 1923, with K-28s 477, 475, and 476 with 14 loaded cars, a flanger, and caboose 0573. Normal Rio Grande practice was two locomotives on the front with another ahead of or behind the caboose.

After the track from Alamosa to Durango was upgraded, the D&RGW moved some of the K-28s to that line for freight service. After the larger K-36s arrived in 1925, the K-28s were mostly used in passenger and mixed train service…

Read the rest of this article in the August 2018 issue of Railfan & Railroad!