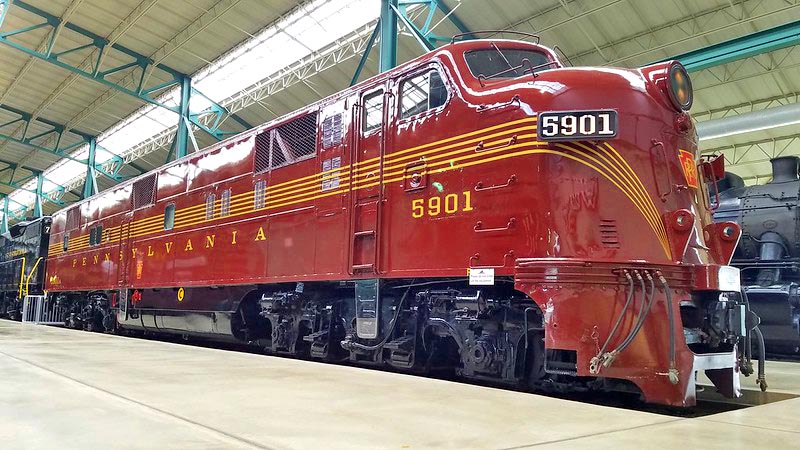 The sole surviving example of EMD’s E7 passenger diesel is Pennsylvania Railroad 5901 on display at the Railroad Museum of Pennsylvania in Strasburg. Otto M. Vondrak photo 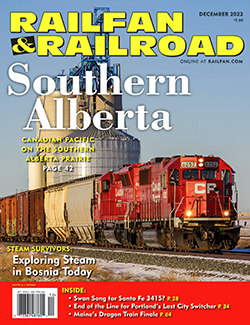 Preservation is tricky. Often what gets preserved is what has the highest public profile. The preserved Southern Pacific 4449 was once one of 28 GS-4 steam locomotives that hauled the company’s most famous trains, the speedy Daylights between San Francisco and Los Angeles. Its glamor was what made it desirable when, in the mid-1950s, a retiring SP engineer lobbied the company to donate a locomotive to the city of Portland, Ore., for display. The humbler 4-8-2 Mountain-types that more frequently hauled SP trains into Portland? No survivors.

Yet fame and prominence are no guarantee of salvation. Santa Fe’s EMC E1As, which hauled the first Super Chief in 1937, are among the most famous of all early diesel-electric locomotives, but none survive. Henry Dreyfuss’ beautifully styled J3a streamlined Hudson for New York Central? All gone.

Representation is not much of a rhyme or reason, either, or at least it hasn’t usually been. The EMD E7A was one of the best-selling and most iconic of all streamlined diesels. More than 400 units were built between 1945 and 1949, and for the next two decades they hauled some of the nation’s most famous passenger trains. Yet how many survive today? One, Pennsylvania Railroad 5901, at the Railroad Museum of Pennsylvania in Strasburg. Contrast this with the lowly, gangly, awkward BL2, a so-called “branch line” locomotive that was one of EMD’s least successful products. A contemporary of the E7 — it was produced from 1947–1949 — the BL-2 sold just 59 units, and yet today, seven survive.

And then there’s the geography problem. There are museums in Maine that have equipment from New York, museums in Pennsylvania with Canadian equipment, there are Utah electrics in Oregon and California and all over the place. One fantasy I’ve long had is what I call “the Great Repatriation,” in which the nation’s major museums get together and redistribute their equipment to their nearest native locations.

There are several issues at play here, but first and foremost is that railway preservation exists mostly through opportunism, passion, and luck. On page 34, you’ll encounter another example of this, one that kept a humble diesel switcher in the town where it spent its last two decades of service, soldiering on as the last EMD end-cab switcher on BNSF. Upon retirement, it was selected for preservation and moved to the Oregon Rail Heritage Foundation in downtown Portland, where it will be restored and continue to pull trains around the Rose City. But that story is rare. In most cases, what gets saved is what just happens to be available when some hopeful museum comes knocking, or what gets neglected and abandoned somewhere and can be — with considerable sweat equity — put back together again.

We should certainly be grateful for anything that gets preserved, most of all to the people who struggled to preserve it. There is, however, a larger problem that looms — what do we do with all this stuff, how do we care for it, how do we use it in ways that tell stories and enrich our lives? What we preserve today reflects what we value now, but will future generations assign it the same level of importance? The true challenge in preservation in the 21st century is not securing equipment or even the work of restoration; it is the fostering of new generations of audiences. It is a search for relevance, in which stories like BNSF 3613’s will be central to survival.

This article appeared in the December 2022 issue of Railfan & Railroad. Subscribe Today!