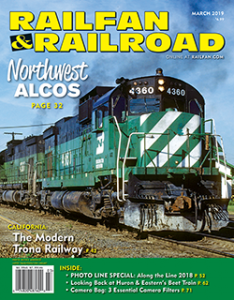 The annual RailTrends conference in New York City is the top railroad industry get-together of the year, and the 2018 version was excellent. RailTrends calls itself “the most elite event in the railway industry.” For those not familiar with it, the RailTrends website says it “brings together the industry’s most notable Class I professionals for an extremely timely, high-level overview of today’s economic operations and directions in rail.” Few reporters attend, but I haven’t missed a session in years. It’s a wonderful place to listen to remarks from the top officials of every railroad, including most chief executives, and to ask questions.

Wow, did I learn a lot. Railroading is changing rapidly in ways that most professional railroaders never consider. “Risks and challenges surely do remain — huge investments in technology by and into competing modes, tighter service requirements, the need for better network cooperation, etc.” wrote Anthony Hatch, the best railroad analyst in the business and the man who organizes the conference. “But the means and increasingly the mindset to change exists as well.”

I won’t go into everything that happened at the conference, particularly the presentation by Stephen Gardner, Amtrak’s executive vice president and chief commercial officer. The answers to my questions produced nothing from Gardner but weird answers such as “the Northeast Corridor is profitable.” That is nonsense because Amtrak’s special form of accounting doesn’t consider many items that add up to billions of dollars in expenses. Gardner artfully stepped around the weird answers in ways that would allow him to say he didn’t lie. You will hear more about Gardner and the strange Amtrak CEO Richard Anderson in future columns. For now, let me just say I have a much higher opinion of Gardner than do any of my friends.

Short lines were also well represented at the conference. “Short lines may be entering a new golden age, in terms of organic growth fueled by technology, better Class I cooperation, and merchandise focus — and through the creation of new short lines (à la CSX),” wrote Hatch. Presentations by short line leaders were excellent, tending to emphasize everything Hatch had said.

Rod Case is head of rail practice at Oliver Wyman, a consulting firm that specializes in transportation operations planning, infrastructure design and maintenance, strategy, and performance management. He gave his usual frightening presentation, saying railroad traffic will grow, but they will lose between 16 percent and 22 percent of market share to faster-growing trucks by 2045. He also said he has seen a change in leadership attitude that amounts to a changed leadership thought process. “So he, and we, might say that time is of the essence,” Hatch wrote. “Rod’s presentation was scary as usual, but also as usual thoughtful, detailed, and with a game plan to change the score before the clock runs out.”

Ann Begeman, newly appointed chairman of the Surface Transportation Board, was a breath of fresh air at the conference. Begeman may be a conservative Republican, but that doesn’t mean she always follows the party line. It was fun to listen to her presentation. Begeman warned that a more active STB is coming. She said the board will not tolerate a repeat of the CSX experience of 2017 under E. Hunter Harrison, when operations all but broke down. At the time of her presentation, the five-person STB was down to only two, and some major rulings had been delayed. Since then, two more members have been appointed and things are likely to become more active. 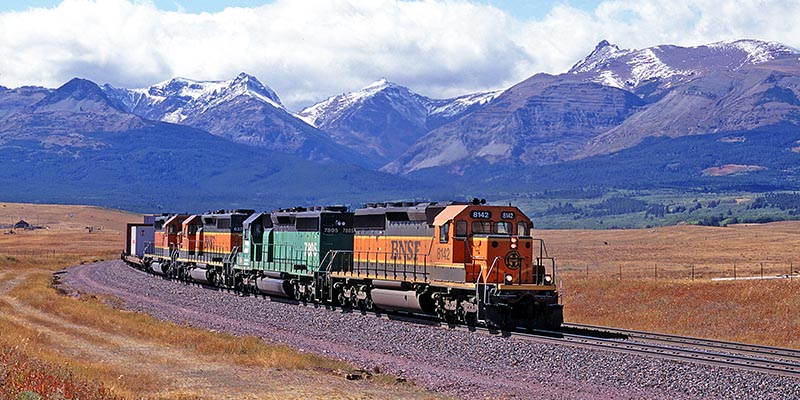 A BNSF Railway freight heads east out of Glacier Park in Montana with a mix of paint schemes including Heritage I orange and Burlington Northern Cascade green. Matt Rose led BNSF into its successful acquisition by Warren Buffett’s Berkshire-Hathaway. Steve Barry photo

The Future of BNSF’s Matt Rose
Matt Rose is leaving his job as chairman of BNSF Railway. I intend to write more about him in the coming months after he settles into a new routine. Even he doesn’t know what he intends to do as I write this in mid-January. For now, I will give you the answers to some obvious questions and I will speculate on what he might do in the future. Two obvious questions I want to get out of the way immediately — no, he did not have a falling out with Berkshire Hathaway chairman Warren Buffett. And no, he will not take over the leadership of Berkshire Hathaway from Buffett.

Within a couple of days of Rose’s announcement, I had a chance to sit down with him to ask some questions and speculate about his future. He said he would be involved in the railroad industry in some way, but he doesn’t know exactly how yet. He will not be chairman of another railroad. He might be a private investor, but that decision is still off in the future. If asked, he will be happy to offer advice to BNSF officials or to Buffett.

I was somewhat surprised to learn how much BNSF has grown in the last 19 years. Between 2000 and 2013, for example, Rose said BNSF’s annual revenue grew from $9.2 billion to $22 billion. Annual carloads shot up from 2.5 million to 10 million. “I never dreamt when I became CEO that in 19 years Warren Buffett would buy the railroad or that BNSF would become one of the largest companies in the U.S., and the largest Class I by volume,” Rose said in an interview with Jeff Stagl, managing editor of Tradepress. “I’m very proud of what we have developed at BNSF.”

Rose began his railroading career in the late 1970s and almost blew it. For three summers while in college at the University of Missouri, Rose was a brakeman and switchman on the Missouri Pacific. He made a lot of money and decided he didn’t want to stay in college — he would rather stay a railroader. Ed Hadley, the general manager of MP’s Kansas City service area, was not pleased. He pulled from his desk a letter Rose had signed that said he was employed by the railroad only through August. Hadley told Rose to go back to college and he could always come back and be a brakeman. Hadley was a smart man. Rose earned a Bachelor of Science degree in marketing and a minor in logistics. He returned to MoPac as a management trainee. He was on his way to higher things as a result.

Tose worked his way up in management at Burlington Northern and rose to BNSF’s top job in 2000 at the tender age of 41. Along the way, he worked several years in the trucking business. In 1998, BNSF Chairman Robert Krebs told Rose he would be groomed as the railroad’s next CEO. He said Rose would work his way up as chief operating officer, then president, then CEO. Krebs estimated that would take about three years.

The greatest change of Rose’s career came in late 2009 when Warren Buffett invited him over for what turned out to be a 15-minute chat, ten minutes of which were spent talking about their hobbies. It was a simple deal: $100 a share for the entire railroad, take it or leave it. The BNSF board discussed maybe trying to talk Buffett up a few more dollars a share. Buffett immediately said not a penny more, and the board just as immediately accepted his offer.

As I said, you will hear more later about Rose’s future.