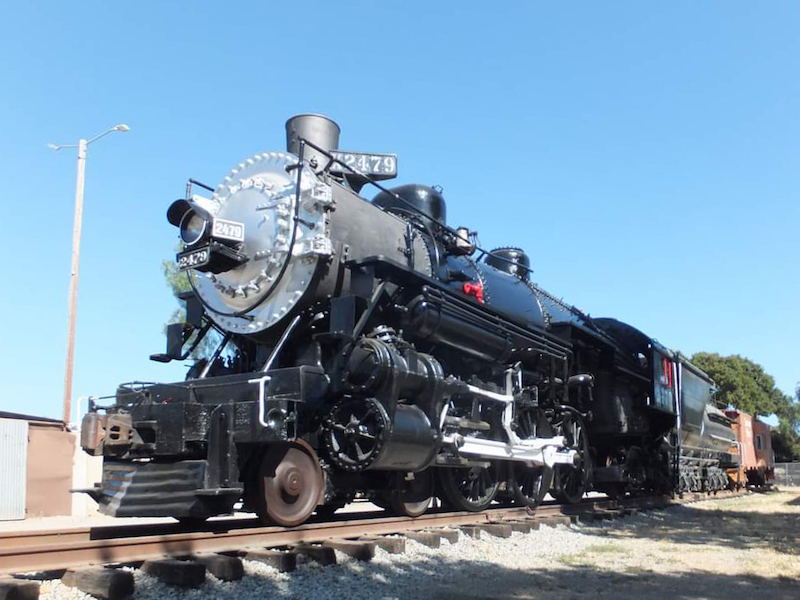 Locomotive 2479 will be restored to service at the Niles Canyon Railway in the Bay Area. Courtesy Photo.

SAN JOSE, Calif. — A Southern Pacific 4-6-2 and the brick roundhouse it was once maintained in will be moved from Santa Clara County, Calif., to the Niles Canyon Railway.

The California Trolley & Railroad Corporation has been restoring SP 2479 since 1989 and it is now 80 percent complete. The restoration will now be completed at the Pacific Locomotive Association’s Niles Canyon operation in Sunol. Also moving to Niles Canyon is the Lenzen Avenue roundhouse built in San Jose in 1899 and used for decades to maintain steam locomotives like 2479 that worked in commuter service between there and San Francisco. The roundhouse was used by SP until 1989 when it was damaged in the Loma Prieta earthquake. The railroad donated it to the county in 1994 for a proposed museum.

The Santa Clara County Board of Supervisors has vowed to help fund the move of the locomotive and roundhouse — as well as tools and a 65-ton diesel locomotive — to Niles Canyon over the course of three years. Steam Services of America has been hired to help move the locomotive. Once the assets arrive at Niles Canyon, their ownership will be transferred to the Pacific Locomotive Association.

“Moving these important historical artifacts to the Niles Canyon Railway enables our organizations to better preserve the rail history of the Bay Area and to honor the thousands of hours donated by our volunteers. This partnership is an ideal opportunity to preserve these irreplaceable resources for future generations,” said California Trolley & Railroad Corporation President Ken Middlebrook.

Henry Baum, president of the Pacific Locomotive Association, said his group has long wanted to have a roundhouse on-site and that work will begin immediately on design work to see where it can be rebuilt. Volunteer and architect Randall Ruiz will be leading this design effort, assisted by architect Marvin Bamburg who oversaw the deconstruction of the roundhouse when it was originally donated to Santa Clara County. The Pacific Locomotive Association will begin to search for grants and corporate sponsorships necessary to get this development project completed.

“Both the roundhouse and locomotive are natural additions to our historic railroad collection,” Baum said.

The Pacific Locomotive Association was founded in 1961 to preserve steam railroading. The Niles Canyon Railway began operations in 1988. The California Trolley & Railroad Corporation was founded in 1982. It currently operates vintage trolleys and maintains a historic display of railroad equipment at History Park in San Jose.