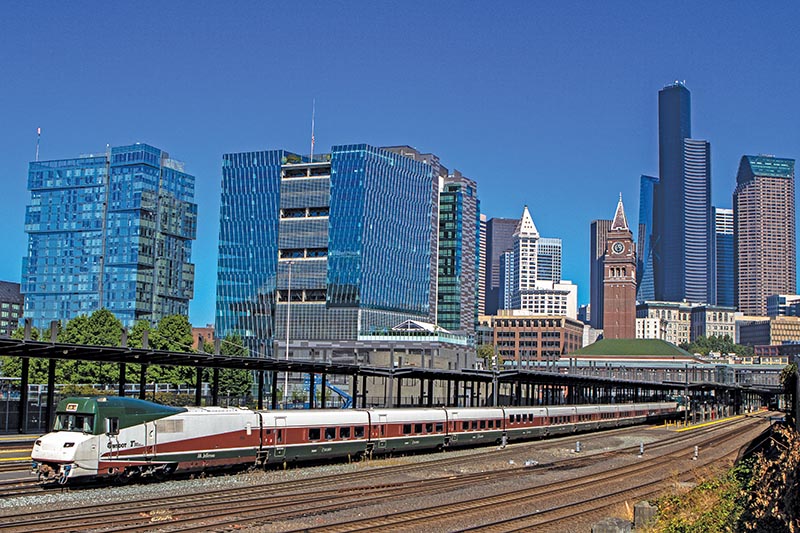 By Robert W. Scott/photos as noted

Anchoring the great Pacific Northwest alongside the deep and frigid waters of Puget Sound, the city of Seattle has a lot to offer for local and visiting rail photographers alike. Seattle, like most large coastal cities, has a robust terminal and marine port along with extensive rail spurs, industries, and trackage. What is most interesting about Seattle is the sheer volume of rail traffic from the two Class I railroads in town, BNSF Railway and Union Pacific. Additional traffic is generated by several small and interesting short line operations around Puget Sound.

Seattle’s strategic location places it at a crossroads for north-south and east-west traffic. With more than 100 trains passing through the city or its suburbs each day, it offers a lot to the casual railfan and the most serious photographer. There is also fantastic scenery through which many of those trains run. It’s possible to capture some of that action whether you have three hours or three days in the area. 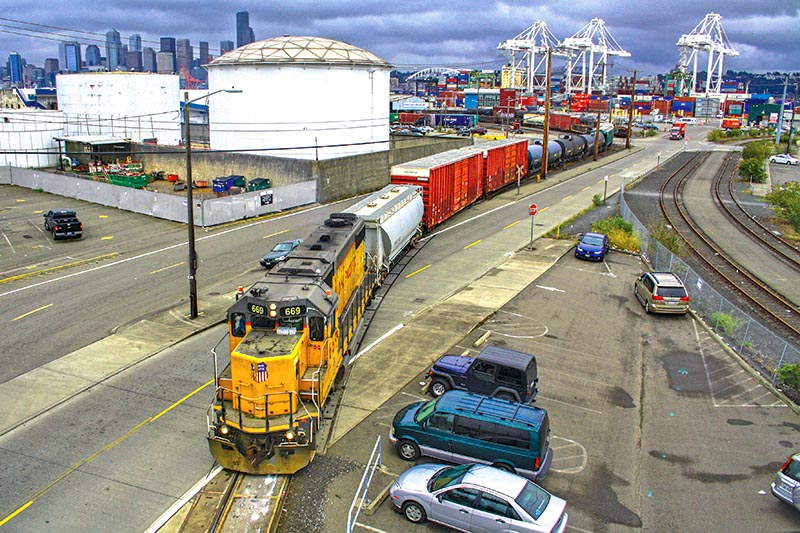 Union Pacific GP38-2 669 is pulling a string of cars from the Alaska Railroad barge slip on Harbor Island on September 29, 2014. Chris Medland photo

The Class Is
Prior to the creation of Burlington Northern, Seattle was served by Northern Pacific, Great Northern, Union Pacific, and The Milwaukee Road. The BN merger of March 1970 combined former rivals NP and GN and made them into a single complementary system (along with Burlington and Spokane, Portland & Seattle). Today, successor BNSF Railway is the dominant player in the Pacific Northwest.

Post-merger, BN found that it had multiple main lines at its disposal for freight traffic, including the former GN route over Stevens Pass (now known as BNSF’s Scenic Subdivision) and the former NP over Stampede Pass (BNSF Stampede Sub). In 1980, The Milwaukee Road ended all operations west of Miles City, Mont., pulling up its western anchors in Seattle and Tacoma, Wash., for good.

The former GN route to Vancouver, B.C., provides a heavy traffic corridor with interchange traffic from Canadian National and Canadian Pacific as well as a multitude of branch lines heading out to the Northwest interior to tap the agricultural and timber production lands.

To the south, the former NP double-track main line heads to Portland, Ore., and carries the majority of the traffic into and out of the region. Union Pacific has its own line from Reservation Junction (Tacoma) that it once shared with The Milwaukee Road. Ballard Terminal is at the Shilshole interchange yard to swap out empty concrete cars for loads left by BNSF on March 30, 2019. Along for today’s trip is an ex-Spokane, Portland & Seattle caboose privately owned by BT engineer James Norvell. Robert W. Scott photo

BNSF Railway has several yards in the Seattle area, including Stacy Street Yard in “SoDo” (meaning South of Downtown, although at one point it meant South of the Dome, as in the Kingdome, former home of the city’s major league sports teams); South Seattle (domestic intermodal terminal); Balmer Yard (North Seattle); and the Interbay engine facility adjacent to Balmer. Until early 2020, Balmer was home to a small 16-track hump classification yard. Due to restructuring of its operations in the northwest, BNSF has shifted its classification to other areas including Everett, Tacoma, and Pasco.

The Port of Seattle and Harbor Island generate substantial freight and container traffic for both BNSF and UP on a daily basis. Containers are loaded onto trains from oceangoing ships at the port, and most of this traffic heads east or south. Tracks in West Seattle require the railroad to cross the Duwamish Waterway (River) on a 1928-built single-leaf bascule bridge constructed by the Strauss Bascule Bridge Co. for NP. A faded NP Monad logo can still be seen on the side of the structure.

While just about any motive power BNSF uses on its system can be found in Seattle, the area has long been a bastion for older EMD and General Electric locomotives. As of this writing, BNSF has several SD60M, SD75, and SD40-2 locomotives in service in Seattle and Everett. 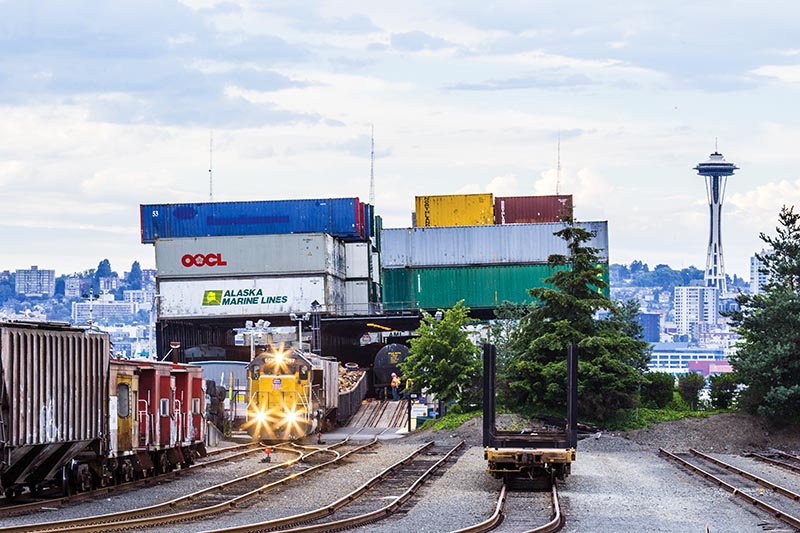 The Space Needle tells you this is Seattle, but you are looking at the southernmost track on Alaska Railroad, all 125 feet of it, on Harbor Island on August 21, 2016. The cabooses and the ancient hopper are used as idlers by Union Pacific to load and unload the once-weekly barge. Steve Carter photo

BNSF Railway also has numerous locals, road switchers, and turns that service area industries. A repainted Great Northern caboose used as a switching platform in Seattle has been seen off and on at the back of a switch job. A local switch crew called the “Renton Rocket” transports Boeing 737 fuselages through the Seattle Terminal to the Boeing 737 plant at Renton. A small section of street running in Renton can treat a visiting railfan to an airplane on a train on a street in a downtown city corridor. This train operates out of Balmer Yard and traverses downtown Seattle before leaving the main line at Black River and heading a few miles east to the Boeing plant at Renton.

Although Union Pacific operates a large and expansive system across the American west, Seattle is at the far-flung end of its northwest territory. Union Pacific has a century-old trackage rights agreement on the BNSF main line north of Portland to Reservation Junction at Tacoma, where UP enters its own main line from Reservation to Black River Junction near Tukwila, Wash. There, it crosses over the BNSF line, running on its own tracks north to Argo Tower in the south part of Seattle where it crosses back over the BNSF main and into its main terminating yard, Argo Yard, at South Seattle…

Read the rest of this article in the December 2020 issue of Railfan & Railroad! Subscribe Today!