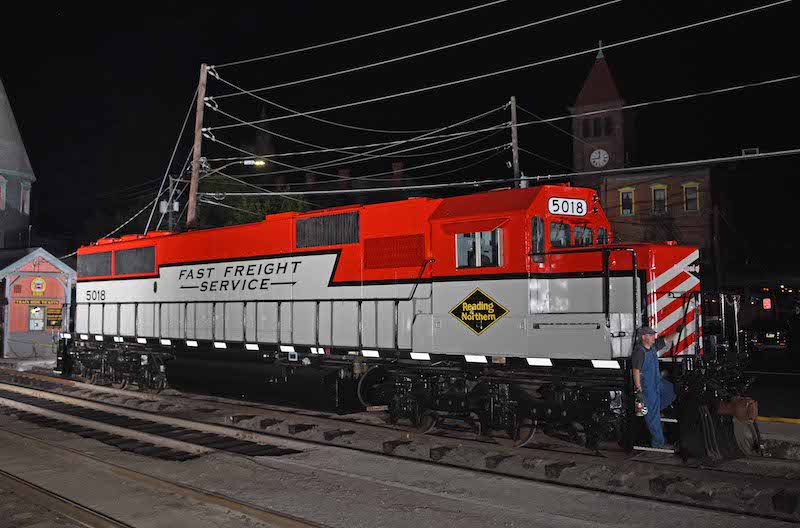 JIM THORPE, Pa. – Pennsylvania regional Reading & Northern will apply a new paint scheme to at least some of its locomotive fleet, marking a departure from the green and yellow colors that have dominated for nearly three decades.

In mid-August, EMD SD50 5018 emerged from the Port Clinton shops in a cream, red and black scheme. The big locomotive features white nose stripes and “Fast Freight Service” logo on the long hood.

Late last year, Reading & Northern picked up four former CSX SD50 locomotives, now numbered 5018-5021. Locomotive 5018 was built in 1983 as Seaboard System 8507, and carried the same number for CSX, according to the railroad.

Reading & Northern got its start as the Blue Mountain & Reading in 1983 with a 13-mile former Pennsylvania Railroad branch between Temple and Hamburg. It expanded in 1990 to a cluster of coal lines in the heart of Anthracite (and also Reading Company) country. Initially, BM&R used a royal blue on its locomotives but switched to various Reading-like schemes when its roster expanded to include U23B’s, U33Bs, and switchers.

The idea for a rebrand came from the ownership, management and employees, the railroad said, admitting that it’s a “drastic change” from the past. “The remaining SD50 type diesel locomotives will be painted in the same scheme,” the railroad said. It’s anticipated that the SD50s will be used on NRFF, the railroad’s premier train – the “North Reading fast freight” that makes a round trip between North Reading and Pittston.

The freshly-painted SD50 was on display in Jim Thorpe on Aug. 14-16, the same weekend excursions returned to the scenic Lehigh Gorge featuring 4-6-2 Pacific 425.