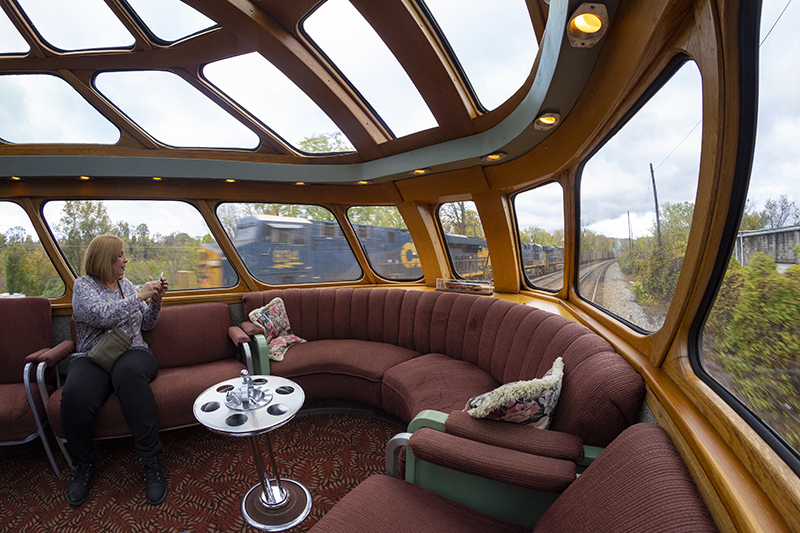 A passenger enjoys the view from the Autumn Colors Express. Nick Benson/ottergoose.net photo

The group that saved the iconic annual autumn excursion through West Virginia’s New River Gorge has announced a new trip in 2020: The Cincinnati Daylight Express will run one-way from Chicago to Cincinnati on Oct. 20.

The Cincinnati Daylight Express will feature the same equipment that will be used a few days later on the Autumn Colors Express between Huntington and Hinton, W.Va. While the one-day excursion will follow the route of Amtrak’s Cardinal, the eastbound tri-weekly long-distance train rarely traverses the line in daylight. The excursion will depart Chicago at 11 a.m. and arrive in Cincinnati at 8:30 p.m.

“The Cincinnati Daylight Express name comes from a Pennsylvania Railroad route and even though we’re not traversing Pennsy rails for this trip, the name was too perfect,” says Lou Capwell, spokesperson for the trip’s organizer, Rail Excursion Management Co. “We call it ‘semi-rare mileage’ because this eastbound journey never occurs in daylight behind Amtrak.”

In early 2019, the Collis P. Huntington Chapter of the National Railroad Historical Society announced it was no longer going to run its annual excursion through the New River Gorge due to rising costs. A few months later, Rail Excursion Management announced it was reviving the train under a new name, the Autumn Colors Express. In October 2019, the train carried more than 2,500 people over three days. The 2020 edition of the train will run over four days from Oct. 22 to 25.

In order to comply with Amtrak’s new rules regarding excursions and the movement of private rail cars, Rail Excursion Management puts the consist together in Chicago before running it east to Huntington. Instead of running the train empty this year, the group decided to sell one-way tickets and the Cincinnati Daylight Express was born.

“This trip announcement has been a long time coming, and we’re hugely thankful to our friends at Amtrak for their support,” Capwell says. “Being able to offer another segment of this trip to the public helps us with one of our core goals: sharing the fun of passenger railroading with as many people as possible, while keeping ticket prices as affordable as possible.”