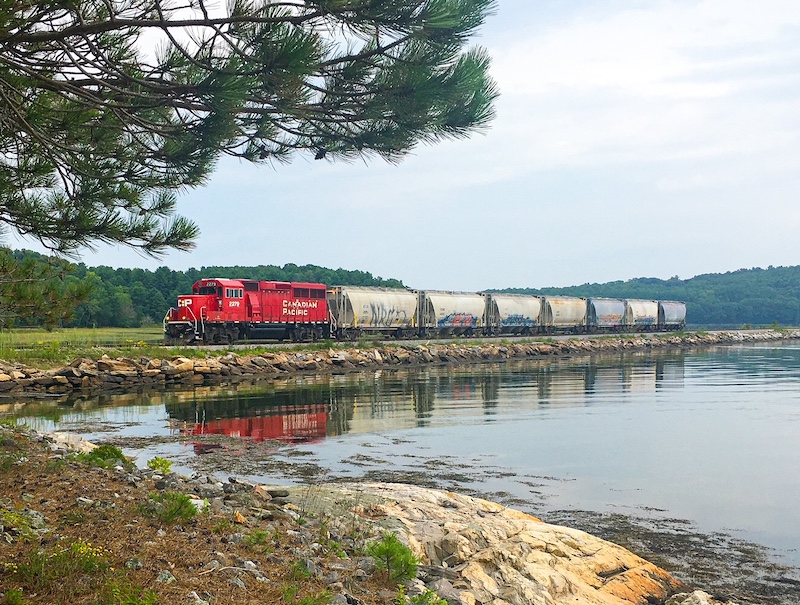 A Canadian Pacific local is seen heading west at Wiscasset, Me., on August 7, 2021. Photo by Timothy Franz.

ROCKLAND, Maine — The Finger Lakes Railway has put the brakes on its expansion into Maine after a major customer on the state-owned Rockland Branch decided to change how it ships its products.

The Finger Lakes was expected to begin operating the 56-mile Rockland Branch this week under the banner Midcoast Railservices, Inc. The former Maine Central branch is currently operated by Canadian Pacific, which wanted to get out of its lease with the state of Maine. However, Dragon Products announced last month that it would no longer be shipping cement out of Rockland via barge. Since 1994, the cement plant has relied on the railroad to move cement from its facility at Thomaston to the wharf at Rockland. The five-mile rail shuttle is the biggest source of revenue on the branch, said Finger Lakes President Mike Smith.

Dragon said it would end the barge operation by December, but still ship product via truck and rail. The Rockland Branch connects with Pan Am Railways at Brunswick. However, Smith said there was no guarantee that there would be enough traffic from Dragon to turn a profit so Finger Lakes has decided to put its plans on hold.

“To lose that business right off the bat would be very difficult,” Smith told Railfan & Railroad. “We’re not going to start a new operation at a loss.”

For now, CP will continue to operate the branch for the state of Maine. Smith said his biggest concern was hiring people to work a line that might not have a lot of business in a few months.

“How do you hire people and say, ‘hey, in a few months we might have to lay you off.’ That would be immoral,” he said.

Smith said the plans to take over the line are not shelved permanently and that Finger Lakes will work with Dragon to see if they can’t solidify the cement business. Smith said he was working with Pan Am about possibly establishing a distribution center somewhere in eastern Massachusetts that they could ship cement to. He’s also optimistic that they’ll be able to develop other traffic on the Rockland Branch. When that happens, Smith said, Finger Lakes would be ready to take over the operation. The current lease runs until December 31, 2025.

The scenic 56-mile branch has had a parade of operators over the last three decades. In 1987, the state purchased the line from Guilford Rail System so that it would not be abandoned. From 1990 until 2000, the line was run by the Maine Coast Railroad, a spin-off of the Massachusetts Central. In the early 2000s, Safe Handling Inc., a Maine-based logistics company, operated the line for a few years before New Jersey’s Morristown & Erie won the contract and ran it as the Maine Eastern Railroad from 2005 until 2015. Maine Eastern ran freight and seasonal passenger services. Central Maine & Quebec began operating the branch in 2016. CP purchased CMQ and took over the lease in 2020.