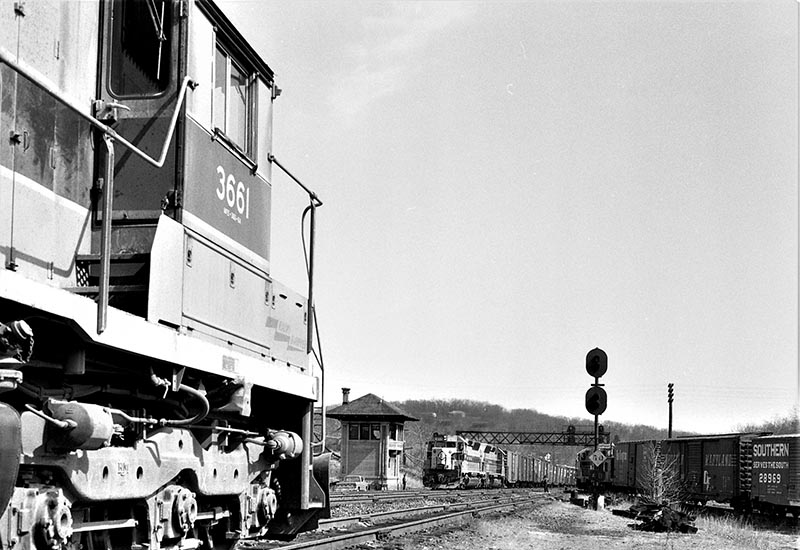 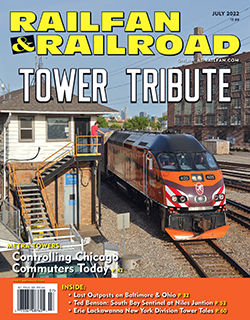 By Arthur Erdman/photos as noted

After the Erie Lackawanna merger in April 1960 that combined Delaware, Lackawanna & Western with Erie Railroad, the eastern anchor of the combined new system was the busy New York Division, which encompassed the main line from Port Jervis, N.Y., into the waterfront intermodal passenger terminal at Hoboken, N.J., plus the associated freight yards around Newark and west toward Scranton, Pa. Not only did dispatchers and tower operators have to contend with a busy rush hour commuter schedule (and remaining long-distance trains to Chicago), but also a variety of hot priority and local peddler freight trains as well. Throughout my career, I had the catbird seat for all of the action.

I almost nailed Train 1, the Phoebe Snow, good at Denville (N.J.) Tower one morning in June 1966. I was covering the first trick at Denville Tower. It was around 10:40am and things began to converge on this junction with the Morris & Essex Line and the Boonton Branch. It had always amazed me that when there is more than one train on the railroad, they seem to meet where one has to wait for the other. 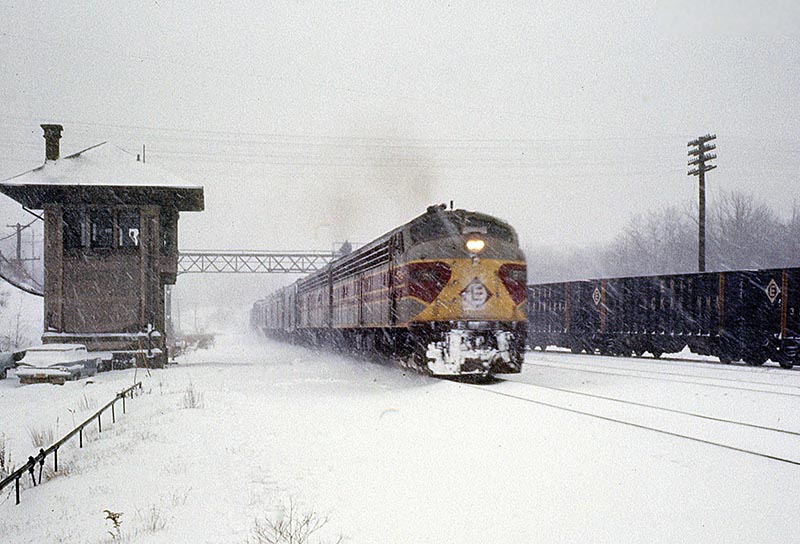 Train HS9 (Jersey City–Scranton) was approaching Rainbow Lakes on the Boonton Branch with a big set-off for Denville, and I had 25 cars for them to pick up off Track 3. Dover Tower reported Train SC2 (Scranton–Croxton, N.J.) following Train 620 on Track 2 with a set-off in the East Side (General Box) at Denville. The Phoebe Snow was due at Denville at 10:55am and I had to keep a “hole” open for the pride of Erie Lackawanna. HS9 had two GP35s and two U25Bs for power. I instructed HS9 to put his set-off in the Hole Track and leave enough room for an engine and three coaches on the west end for Train X-64 (Dover–Hoboken equipment train) to turn on the wye later in the afternoon.

Train HS9 cut off the set-out and I let him pull up west to the signals at Estling Lake. There were 30 cars in the set-out, and after I lined HS9 to the Hole Track, I was unable to raise the crew on the radio to back up. Morristown Line Train 620 went east at 10:01am. After I raised the crossing gates I tried HS9 on the radio again. No answer. I was getting frantic. Train 1 was due any minute and I had no track to put him on.

Suddenly, Signal L40 tripped and HS9 was shoving back. Train 1 lit up the approach circuit on the model board. Phoebe’s engineer called me on the radio and said he had an “approach” on the distant signal to Denville. Now I was really in a panic.

HS9 slowly shoved east toward the Hole Track as I dropped the crossing gates for Train 1. I positioned myself at the switch levers. The second the switch indicator lights lit, and I threw the switches over. Train 1 was slowly coming around the curve as I operated the last switch and displayed the signal for the train. As the signal cleared, the three EMD E8s on Train 1 revved up and accelerated past Denville Tower.

I was warned about not depending on the radio by the older towermen I broke in with, and this proved it. 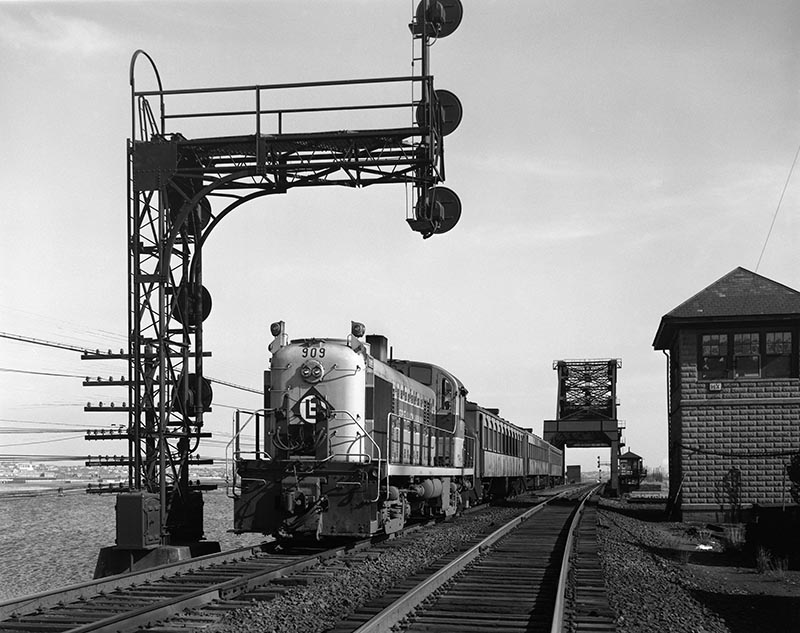 ABOVE: EL 909 leads a commuter train past HX Tower at Rutherford, N.J., via the HX Draw Bridge, which connects Secaucus to East Rutherford over the Hackensack River, on May 13, 1966. —Victor Hand photo, courtesy Center for Railroad Photography & Art

Wires Down
I dreaded covering the third trick at HX Tower in East Rutherford, N.J., on bitterly cold nights. Walking across that bridge into the north wind really took the stuffing out of me. Plus, the nails that held down the wood planks of the walkway would work their way out and wait for an unsuspecting employee to trip on them. I tripped over a nail one night and my lunch went tumbling into the Hackensack River as I fell down. On really bad nights, at least I could stop at the bridge operator’s cabin and warm up for a minute. One night, we had a really rough time with the wind and cold.

It was February 1967. I was ordered in to cover the third trick at HX Tower on a Wednesday and Thursday night. That Wednesday, the wind was really howling out of the north. I made it to the tower without freezing to death. NY99 (Jersey City–Chicago) was over an hour late leaving Croxton; a broken rail at County Road delayed doubling the train together. After NY99 cleared the bridge, I gave the bridge lock to the signal maintainer out on the bridge; on third trick, the signal maintainer operated the drawbridge. I was just about to sit down at the desk when the small code machine for Bergen Junction started to click away. I watched as, simultaneously, circuits for both track 1 and 2 lit up and a big flash and explosion lit up the sky down by County Road. I reported this to Train Dispatcher Jim Crelin, who called out the signal maintainers.

An hour later, I get a call from the signal maintainer from The Boxcar (the Yardmaster’s office at County Road). The maintainer reported that a set of Public Service Electric & Gas high-tension wires came down right across the tracks. High voltage got into the relay cases and fried many of the signal relays. At this point, it was just before 1:00am and rush hour would start in less than four hours. 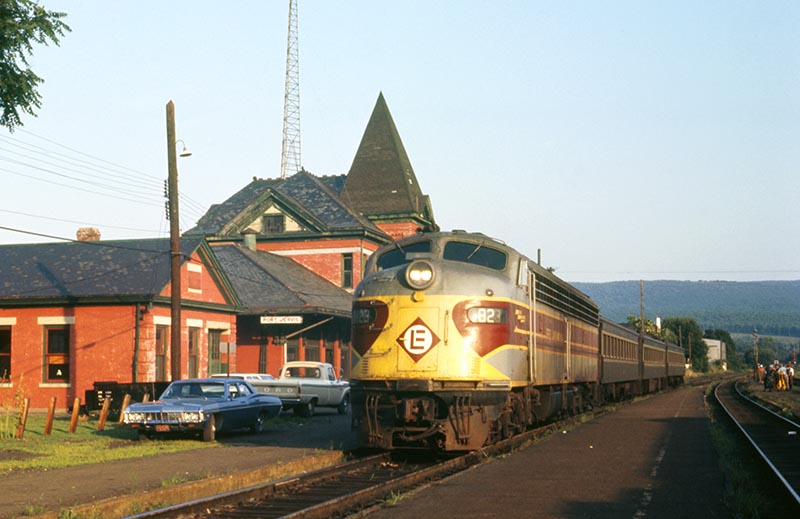 ABOVE: With long-distance passenger trains canceled in 1970, EMD E8s were demoted to commuter service, usually handling the longest routes to Port Jervis, N.Y., as seen on August 8, 1971. —Tom Nemeth photo

I reported all of this to the train dispatcher. Jim must have sounded the alarm as signal forces from all over descended on County Road. A line crew from PSE&G showed up and got the wires off the tracks, but the damage was done. Since I was unable to display the signals at the east end of the bridge, we were looking at a serious issue for the morning rush.

Russ Robinson, the first trick man, arrived at HX on Train 1150 from Suffern around 7:15. I suggested that I remain at HX to help by running up and down the stairs giving the trains verbal permission past the stop signals at the east end of the bridge. The train dispatcher approved, and that’s what we did. All the signals were treated as “stop and proceed” from HX to Bergen Junction and the rush hour was in shambles, but at least the trains moved.

We later found out that PSE&G had recently strung those high-voltage wires across the railroad using a new type of splice that could not hold up to the bitter cold. They let go and down came the wires.

Although I was allowed to work only nine hours due to the Hours of Service Law, I stayed two hours past my relief time and that paid off for the train movements. I was glad to hit the pillow when I got home…

Read the rest of this story in the July 2022 issue of Railfan & Railroad. Subscribe Today!