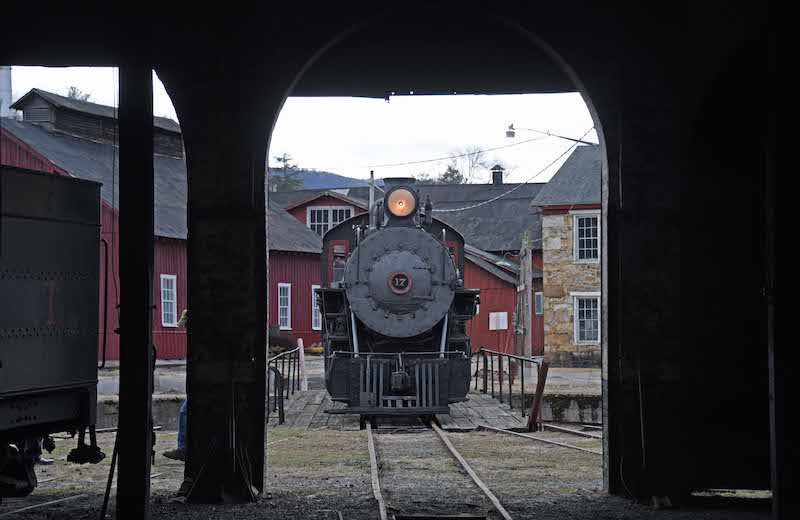 ORBISONIA, Pa. –Just weeks after it celebrated its 60th anniversary as an excursion railroad, the East Broad Top has announced a series of weekend dinner train runs this October. The Harvest Moon Dinner Train will be the second time this year the public will have a chance to ride the reborn narrow gauge railroad.

On Oct. 2 and 3, the EBT will have a tent set up for a socially-distant sitdown dinner. Afterwards people will be able to ride the recently rebuilt main line to McMullins Summit and beyond behind the M-7 diesel locomotive. Tickets are expected to sell quickly and seating is limited.

Since the announcement in February that the East Broad Top had been purchased by a non-profit foundation, a lot of work has been done – track has been rebuilt and ballasted, buildings stabilized and painted, and steam locomotives inspected.

The 33-mile East Broad Top was built in the 1870s to bring coal out of the central Pennsylvania mines, but also carried general freight, mail and passengers. Demand for coal kept the railroad running until 1955, but it fell on hard times and filed for abandonment. In 1956, the assets of the East Broad Top Railroad & Coal Co. were purchased by Nick Kovalchick, a local salvage dealer. In 1960, the twin boroughs of Orbisonia and Rockhill Furnace approached Kovalchick about putting a locomotive on display for the towns’ bicentennial. Successful trips were run and continued for 52 years before the property returned to slumber in 2011.