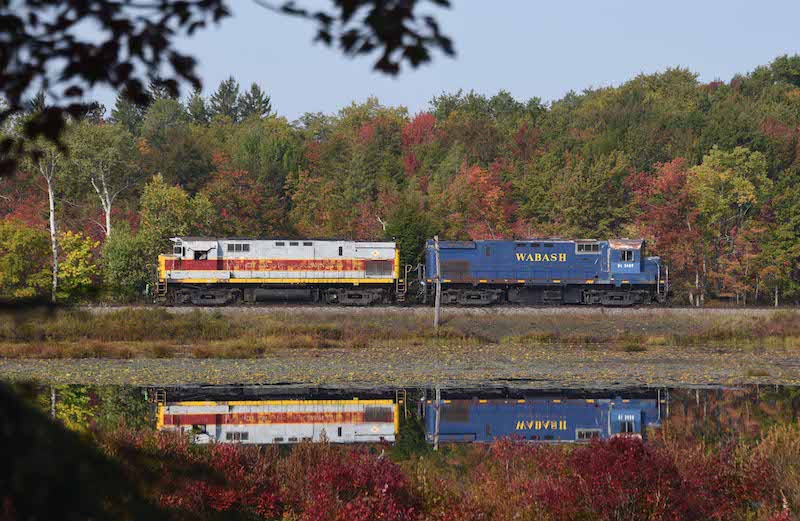 Delaware-Lackawanna Railroad Alco C424 number 2409 was recently lettered “Wabash” on a nod to its heritage. Photo by M.T. Burkhart.

SCRANTON, Pa. — Earlier this year, the Delaware-Lackawanna Railroad restored a former Wabash Alco C424 to service after an extensive multi-year rebuild. This month, its past was honored when it emerged from the shop with “Wabash” lettering restored on the long hood.

Built in 1964 as part of an order for Ferrocarriles Nacionales de Mexico (NdeM), it was rerouted to the Wabash as its B905 and relegated to trailing duties because all placards were in Spanish. It later went to Norfolk & Western as its 3905 and then an industrial operation before becoming Delaware-Lackawanna 2409.

During the rebuild, the locomotive received a rebuilt 16-251F prime mover, new wiring and many other items. It’s dark blue paint is not original Wabash – it’s actually leftover from its days at Associated Electric Co-Op – but is a close approximation. Tri-State Railway Historical Society, the Wabash Railroad Historical Society and Genesee Valley Transportation cooperated on the retro look. (There are also “B905” patches for the cab sites, but they remain tucked away in the new Von Storch shops, which opened last week).

It’s not known how long the lettering will remain as there are plans to paint it into D-L corporate colors. But for now, it can be found operating on any number of lines radiating out of Scranton.