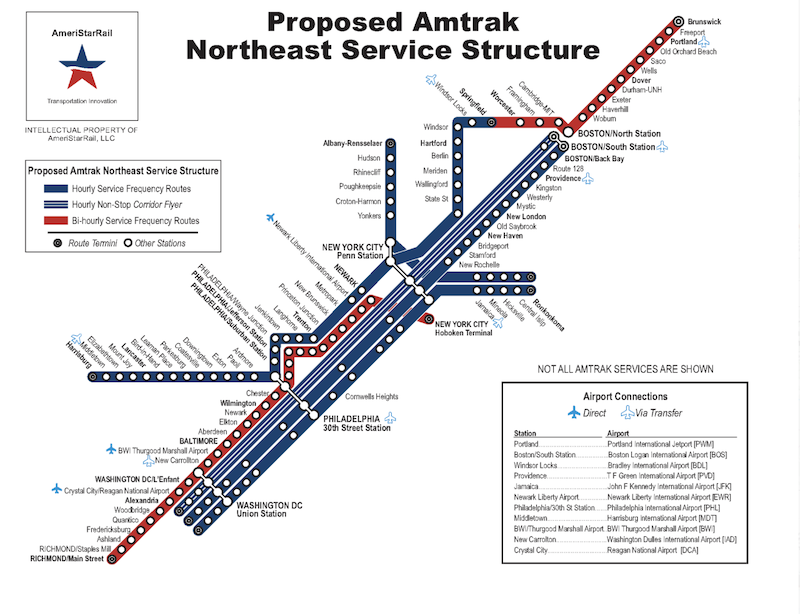 A map of how AmeriStarRail proposes running the Northeast Corridor.

BALTIMORE — An upstart company that wants to take over train operations on Amtrak’s Northeast Corridor is proposing to remake the passenger rail landscape in Baltimore by building four new tunnels and a new central station. Among the tunnels AmeriStar Rail wants to replace is the troubled Baltimore & Potomac Tunnel. Built in 1873, the double-track tunnel is Amtrak’s oldest and a longtime bottleneck for NEC and MARC trains.

Two of the proposed single-track tunnels would be dedicated to Amtrak trains, a third to MARC commuter service, and the fourth to a Baltimore Crosstown Metro transit line between the I-195 and I-895 park-ride sites that AmeriStarRail wants to build as part of its ambitious “Baltimore Grand Slam” plan. In the city center, the tunnels would reach the Frederick Douglass Freedom Station, within walking distance of many attractions and other transit options.

The company advanced its ideas in a letter to local, state and federal officials on February 16.

The proposal may get a frosty reception from some of those officials, who announced a $4 billion plan to replace the B&P Tunnel last June and who in October launched a $150 million effort to renew Baltimore Penn Station and revitalize the surrounding neighborhood.

AmeriStarRail was founded by rail transit veteran Scott R. Spencer and bankruptcy attorney Neil B. Glassman, chairman of the board at the Bayard law firm. The firm names former Amtrak President Paul Reistrup (1975-78) as a Mentor/Senior Advisor. In 2020, it announced plans to offer a private-sector plan to “augment” Amtrak service by operating frequent, high-speed trains with European-style compartments with expanded run-through service to locations including Ronkonkoma, N.Y., on Long Island. AmeriStarRail says it would pay fees to Amtrak for track usage and dispatching services.

The proposal has not gained traction with Amtrak officials, with a spokesperson dismissing many claims made in the AmeriStarRail NEC proposal.