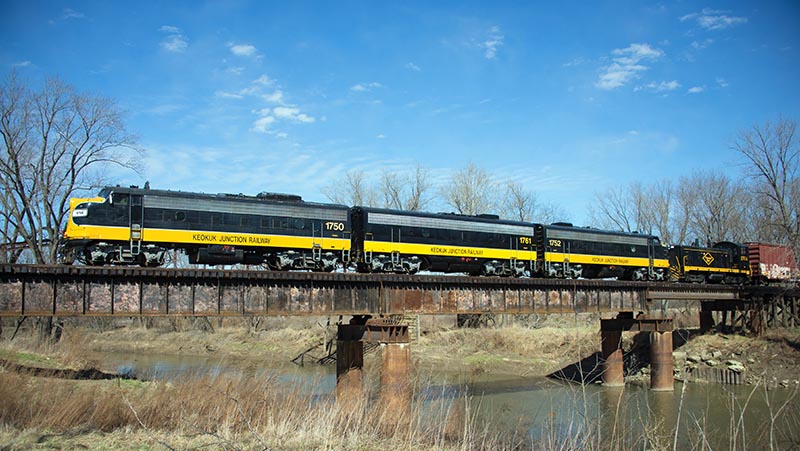 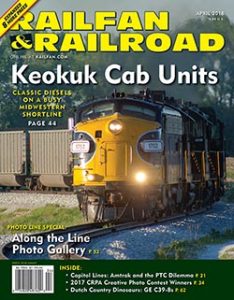 By Steve Smedley/photos by the author

The rhythm of the rails beneath EMD FP9A No. 1752 as it gently rocks from side to side calms as a ten-pound set of air on the 18-car train begins to take hold. Keokuk Junction Railway engineer Jeff Rhoades has slowed his westbound train as it tiptoes across the wooden trestle approach to the wreck-replaced Spoon River Bridge. Snow magically floats to the frozen river as the classic A-B-A cab units and a dead GP20 roll the train toward LaHarpe, in West Central Illinois.

Just down the railroad, a donkey is the only visible sign of activity of the seven listed residents on the sign marking Seville. The train’s conductor, Jeff Ducharme, radios Rhoades to slow the train as he writes down a new train list after an hour of switching at UE siding. Miraculously, this scene has been repeated hundreds of times, with the classic cab units nearing 11 years of service pulling freight in central and western Illinois for Pioneer Rail Corp. and its subsidiaries.

Pioneering Cab Units
Pioneer Rail’s late owner and president, Guy L. Brenkman, had a warm spot in his heart for covered wagons. Prior to his death, he was visibly proud of the two FP9A units painted and lettered for Pioneer’s Peoria & Western Railway. “They did an excellent job with them,” he told this photographer as he talked about the units being painted in a one-stall, cramped engine house in Keokuk, Iowa.

The two A units, along with several GP20s and a GP16, were normal power for the train based out of Canton, Ill., given the moniker “Canton Cannonball” by the original engineers and general manager. Brothers Doug and Dave Henry worked with conductors Jake Streitmater and Josh Flatley during the first few years of operations. 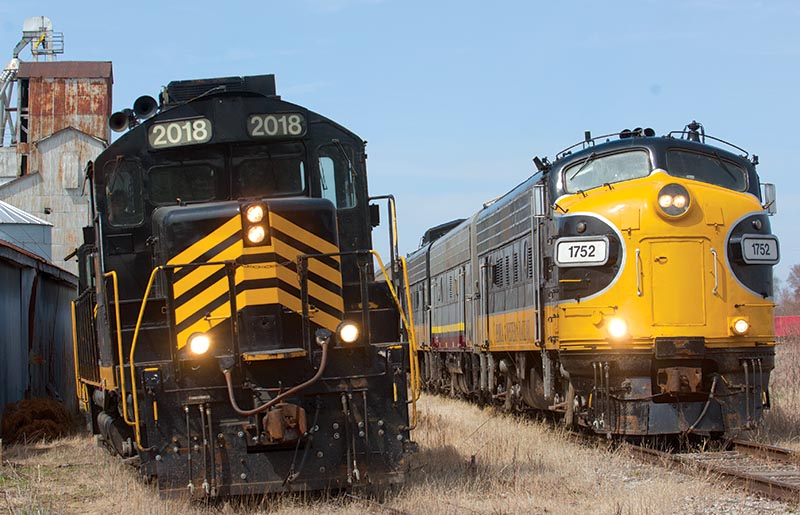 Crews from Keokuk (left) and Kolbe work on sorting and pulling storage cars at Disco on the Lomax line on March 30, 2010.

The Keokuk Junction operates the former west end of the Toledo, Peoria & Western Railway between Kolbe station, at Mapleton, to LaHarpe, where the line splits. One line, the former connection for westbound bridge traffic between the Penn Central in Logansport, Ind., and the Santa Fe at the Lomax connection, is now filled with several hundred storage cars. The other line, which the original “TipUp” referred to as its Keokuk Branch, sees most of the online originated traffic out of Keokuk, Iowa.

The units were bought by Pioneer Rail Corp. from Canadian National after CN acquired the Wisconsin Central in October 2001 and declared the units as surplus. WC had acquired the units in 1995 from VIA Rail Canada for use on WC’s Agawa Canyon passenger trains out of Sault Ste. Marie, Ont., after WC bought the Algoma Central. The units were built by GMD at London, Ont., for CN as Nos. 6502 (in 1954) and 6511 (in 1955); they became ACR 1750 and 1752. 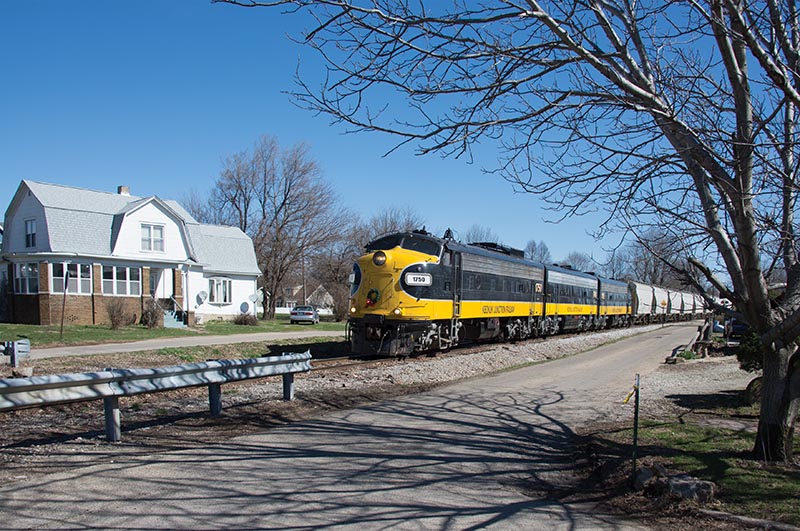 West Railroad Street runs on the north and south side of the tracks in Canton as the Keokuk Junction Railway heads west on a clear March 8, 2017.

Joining the two A units is F9B 1761, which ran for several years in its former Algoma Central livery. If I had a dollar for every time a fan asked me “when will they paint the B unit?” I’d be a rich man. Pioneer built a new three-stall shop building at LaHarpe, making it much easier to paint locomotives, and crews were finally able to paint the B unit in 2014.

Most locomotive mechanics will tell you a new coat of paint doesn’t improve the performance of a diesel-electric; proving the point, the 1761 became a shop queen as soon as the paint dried. “It had a ton of bugs to work out; it used to spin its wheels going up Smithfield Hill,” said retired engineer Doug Henry.
Traction motors and a grounded-out main generator have been replaced, and several other minor repairs have been completed and, unless an inspection is required, the set of A-B-A locomotives makes at least one trip a week from Kolbe to LaHarpe…