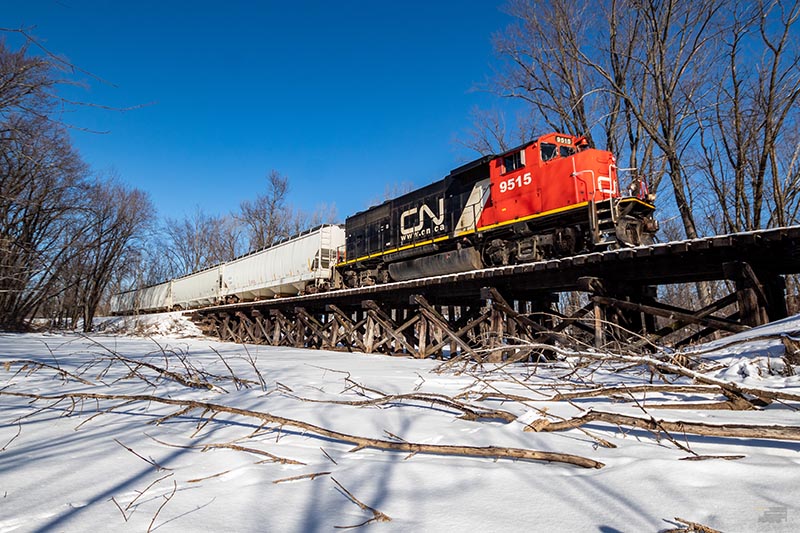 Canadian National GP40-2LW 9515 flies high over a swamp in New London, Wis., on January 23, 2022. Up the tracks to the rear of the train was the historical crossing with Green Bay & Western Railroad, now mostly a trail. 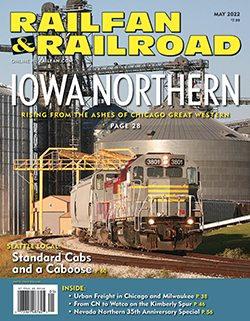 by Liam Hoffmann/photos by the author

The lunch bell rings. It’s my junior year of high school, sometime around 11:45. It’s a warm September day, and there’s an hour to kill. Luckily, the ringing of the bell coincides with the arrival of Canadian National’s L521 local job in Combined Locks, Wis. Powering today’s train is ex-Elgin, Joliet & Eastern 703, the last orange GP38-2 on the CN roster. It has a full set of five spots for Appleton Coated, a paper mill located in this suburb of Appleton. As the brightly colored Geep moves in to make the spots, the crew gives a warm wave and continues switching the plant. A watch check reveals that the lunch period is almost over, and it’s time to return to class.

Appleton is nestled deep within the Fox Valley region of northeast Wisconsin. Throughout the early and mid-1900s, this area was a hotbed for industry, including hydroelectric dams, paper mills, lumber mills, and most importantly, the railroad. At one point, three railroads served Appleton — The Milwaukee Road, Chicago & North Western, and Soo Line. 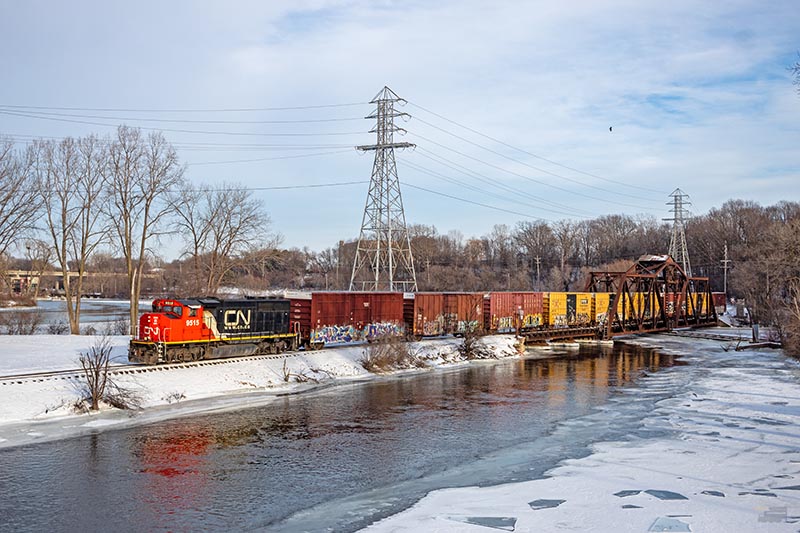 ABOVE: A bald eagle soars high above the Lawe Street swing bridge as CN 9515 heads west toward Appleton Yard on January 11, 2022. At one time, PCB pollution had diminished the bald eagle population, but their numbers have been on a steady increase since 1980.

To serve the town and its many mills, these three railroads constructed spurs and branch lines which still cut through the heart of downtown Neenah, Menasha, and Appleton. These lines are known today as the Shawano Subdivision, Kimberly Spur, and New London Spur. In July 2020, in the midst of the pandemic, Canadian National announced it intended to sell 850 miles of former Wisconsin Central track in Wisconsin and the Upper Peninsula of Michigan. Much speculation occurred over social media and online message boards on what railroad(s) would be interested in these lines, and the railfan community in Wisconsin was in panicked excitement. What would happen to the Kimberly Spur? The Shawano Sub? The Denmark and Luxemburg spurs in Green Bay?

The speculation lasted for about nine months before being answered in March 2021 — Watco would purchase the entire package, and form Fox Valley & Lake Superior Railroad (FOXY) and Agawa Canyon Railroad to operate the lines in the U.S. and Canada, respectively. The sale was approved by the U.S. Surface Transportation Board on December 20, 2021, and CN began the transition on January 28, 2022. With this in mind, I headed out into the Fox Valley to record the last days on Canadian National’s Appleton branches. 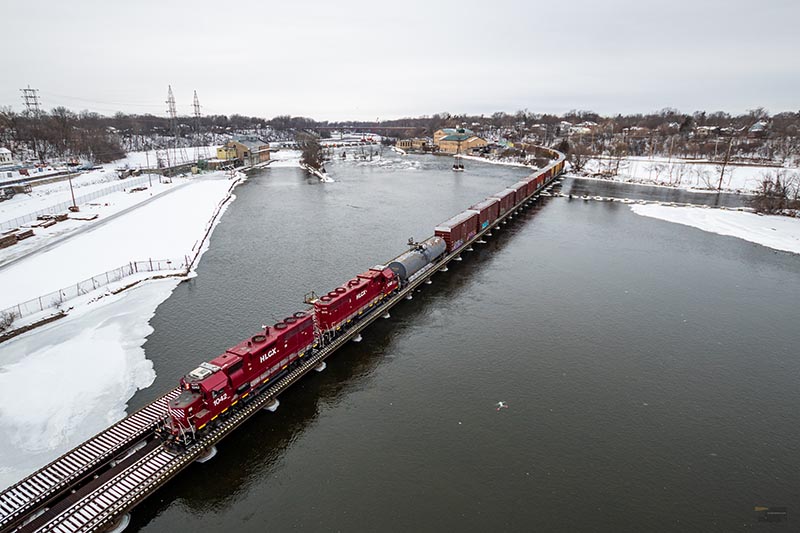 ABOVE: FOXY Train AP-201 crosses the Fox River in Appleton on its maiden voyage to Kimberly on January 29, 2022. The Paper Discovery Center sits at the rear of the train, occupying a former paper mill. The view is from the South Oneida Street bridge.

The Kimberly Spur
Growing up nearby in Darboy, Wis., the few miles of the Kimberly Spur grew to be my favorite of the Appleton branches. It was graded and constructed in 1871 by Milwaukee, Lake Shore & Western Railroad. In 1893, MLS&W was purchased by Chicago & North Western, including the Kimberly Spur. As originally constructed, the spur ran from Eland to Manitowoc, Wis. Historically, all the preceding railroads ran turns per day on the spur, usually one in the morning and a counterpart at night. During C&NW operations on the branch, countless daily locals — both night and day — shuffled cars at the mills. 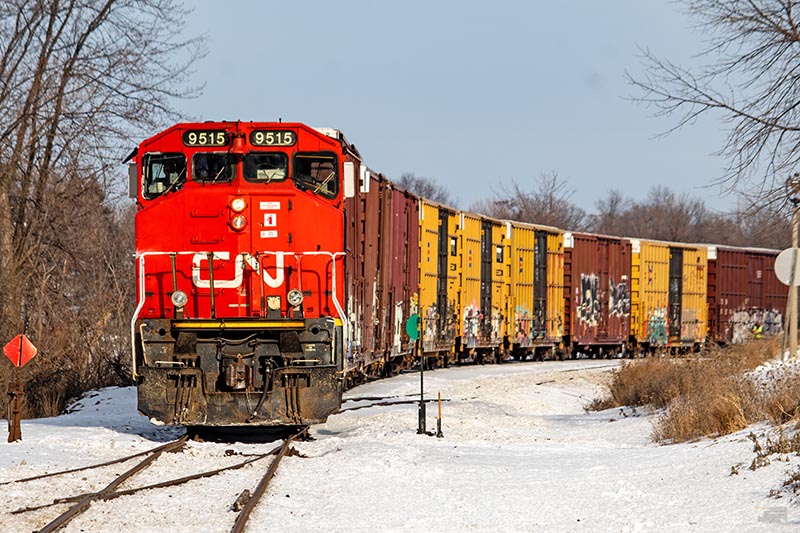 ABOVE: That same day, the conductor on today’s L521 walks back to the end of his train to board after making a cut in L.C. Siding in Kimberly. Next will be work at WSI (Warehouse Specialists) in Combined Locks.

In 2001, Wisconsin Central was purchased by Canadian National. After the sale, the train symbol changed to become L521 — just one train per day, every day except Sunday. When I was introduced to the Kimberly Spur in 2008, economic turmoil had left the paper industry in a panic. It was in 2007–08 when the New-Page mill in Kimberly closed its doors for good, a result of the economic downturn and the mill’s aging equipment causing the owners to lose millions on their investment. As such, they packed up shop and pounded the for sale sign into the ground, with the stipulation that another paper company could not purchase the mill. Because of this, it was all sold for scrap; thus came an end to 126 years of papermaking in Kimberly. Thankfully, the Appleton Coated mill survived the 2008 economy and was still operating by the time I was introduced to railfanning in 2015. Between the carloads generated from Appleton Coated and Neenah Paper, the Kimberly Spur remained — and still is — a busy stretch of railroad…

Read the rest of this article in the May 2022 issue of Railfan & Railroad. Subscribe Today!