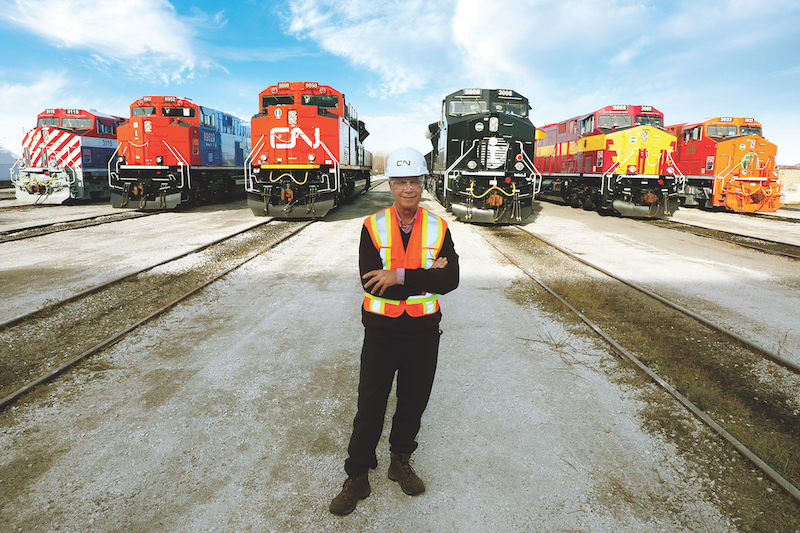 MONTREAL — The worst kept secret in railroading is out: Canadian National has heritage units.

On Tuesday, CN unveiled an image of the five heritage units with CEO JJ Ruest to mark the 25th anniversary of becoming a publicly-traded company. Prior to 1995, CN was the largest and oldest Crown Corporation in Canada. Since going public it has gone on to acquire four major railroads — Illinois Central, Wisconsin Central, Elgin, Joliet & Eastern, and BC Rail — giving it a rail system that touches three coasts, from the Atlantic to the Pacific and south to the Gulf of Mexico.

All four railroads and Grand Trunk Western are represented in the five-unit heritage unit fleet. The railroad also released a freshly painted CN locomotive with a special 25th-anniversary logo.

The GTW-painted SD70M-2 was first spotted more than a month ago and within hours of being released, rumors of an ambitious 18-unit heritage program began to spread like wildfire online. The IC, WC, EJ&E and BCR units were spotted shortly thereafter. Despite numerous sightings of the locomotives, CN officials refused to comment on the apparent heritage unit program until this week when they released the official portrait. Sources close to the railroad have said there will only be five heritage units.

“I want to thank everyone who contributed to this success as well as our employees for their dedication to safely moving the economy for our customers and for the communities where we operate,” Ruest said. “Twenty-five years after the IPO and with safety as our core value, our future is all about performance and customer service, generating long-term value for our shareholders. It’s been an amazing 25 years and the journey continues.”

After the official portrait was taken in Montreal last week, all five heritage units were put in service. Officials said the locomotives could be spotted anywhere on the CN network.