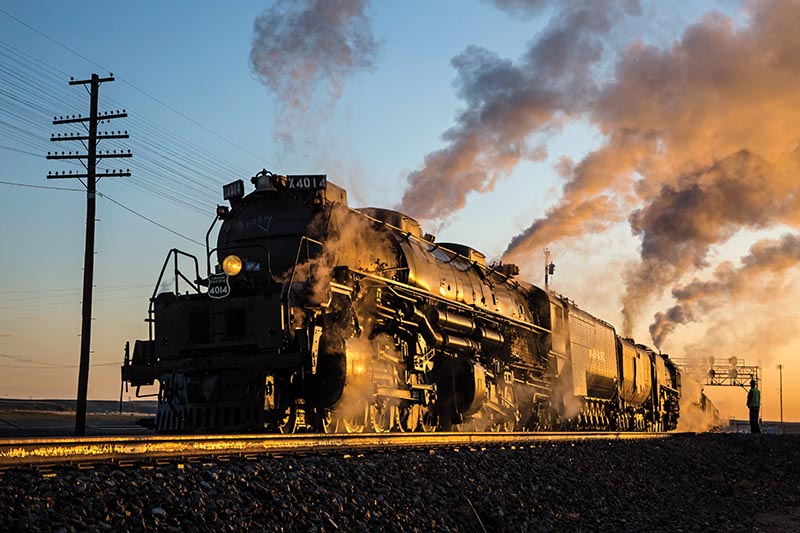 With a 4:00 a.m. departure from Rock Springs on May 6, dedication was rewarded with some of the best light on the trip as a magnificent sunrise greeted the train in Granger, Wyo., as Union Pacific Big Boy 4014 paused for its service stop a crew member inspects the consist. Jim Kleeman photo 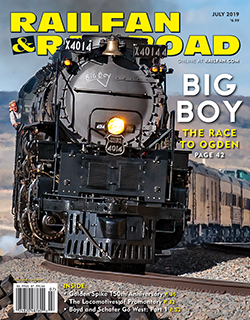 “A Big Boy will never run again.” That was the conventional wisdom. Too big. Too expensive. No place to go. But with an approaching anniversary of perhaps the greatest feat in U.S. railroading history — the 150th anniversary of the completion of the Transcontinental Railroad — something big needed to be done. The groundwork was laid for the biggest steam restoration of the 21st century.

Rumblings of a Big Boy revival began percolating in 2013. Union Pacific, one of the two railroads to participate in the driving of the Golden Spike on May 10, 1869, signaling the completion of the Transcontinental Railroad, was looking to mark the event in a big way. Union Pacific had fielded the largest steam locomotives to ever run in the U.S., including 25 4-8-8-4s built for the Wasatch Mountains of Utah and Wyoming. Eight of the behemoth articulateds survived in museums around the country. Why not get one operating in time for the anniversary? After all, there were more than five years to get ready.

The railroad checked out each of the eight survivors to see which was the best candidate for restoration. While the most convenient option would be Big Boy 4004, on display in Holliday Park in Cheyenne, Wyo., UP decided the best bet would be 4014, long displayed at the RailGiants Train Museum in Pomona, Calif. The Golden State’s mild climate was kind to the 4014, and it was deemed the easiest to restore, despite having to be moved to Wyoming.

Union Pacific 4014 leans into the curve approaching the crossovers at Peru west of Green River, Wyo., on May 13. The photo line has breathed a collective sigh of relief as a big cloud shadow just cleared the scene. Steve Barry photo

The Wasatch Class
Union Pacific’s Big Boy locomotives were built in two batches between 1941 and 1944 by American Locomotive Company. Originally named the “Wasatch” class after the mountains they were designed to conquer, when an Alco worker scrawled “Big Boy” in chalk on the front of one, the new name stuck. In addition to performing their designed service hauling freight between Ogden, Utah, and Green River, Wyo., they were later transferred to Cheyenne to power freight trains over Sherman Hill to Laramie. Built to burn coal, the locomotives had a relatively short revenue career. By 1959, all had been retired.

Restoring a Legend
With five years to get 4014 ready, you’d think there would be plenty of time to prepare for the 2019 celebration centered in Ogden, Utah. Under the capable direction of Ed Dickens Jr., the Steam Team tore 4014 down to its frame and work commenced. 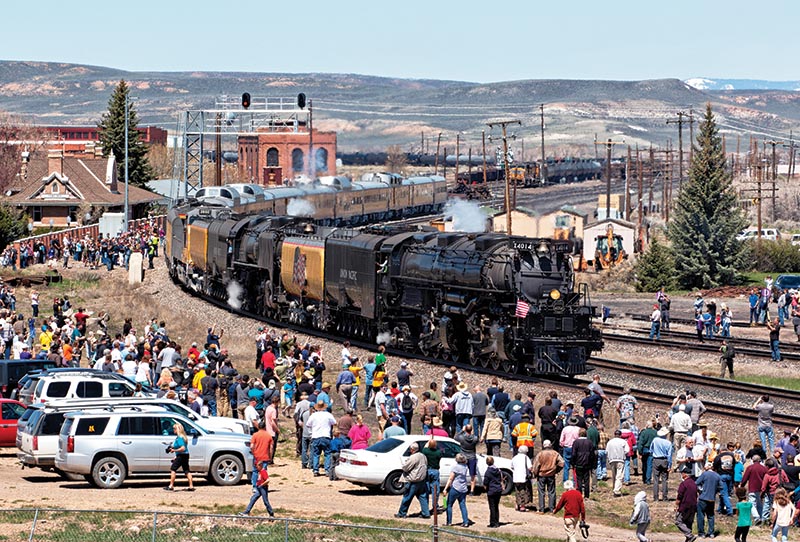 Unfortunately, other stuff slowed Big Boy’s progress. The UP steam shop, housed in a former diesel shop, wasn’t really suited for working on steam and was redesigned and modified. Union Pacific 4-8-4 844, meanwhile, was still needed to roam the railroad’s system as a goodwill ambassador and required attention; it emerged from the steam shop in 2016 and traveled as far as Memphis, Tenn. The shop workers are also the same crew who head out on the road with the steam locomotives, so time spent with 844 was time not spent working on 4014 in Cheyenne.

The calendar days started slipping away. The sesquicentennial of the Golden Spike — May 10, 2019 — was a fixed date and there was no pushing back the schedule, but as the calendar flipped to 2019, the 4014 still had not seen a fire…

Read the rest of this article in the July 2019 issue of Railfan & Railroad!