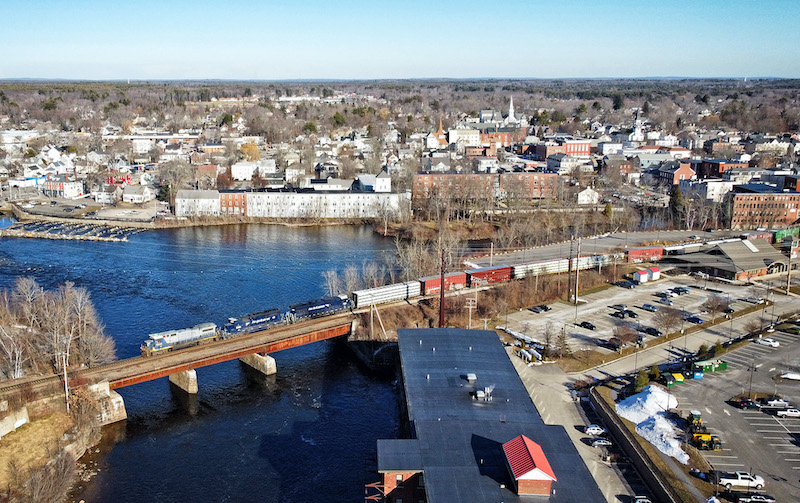 Pan Am Railway’s POAY is seen at Biddeford, Me., in January 2021. Photo by Justin Franz.

WASHINGTON — As the U.S. Surface Transportation Board’s review of CSX Transportation’s proposed acquisition of Pan Am Railways kicks into high gear, stakeholders both for and against the transaction had their say this week as the comment period comes to a close.

Monday was the final day to accept responses to comments, protests, requests for conditions and other comments in support or opposition. That deadline brought a flurry of comments, most of which reiterated previous positions. Among them was Norfolk Southern and Genesee & Wyoming — key partners with CSX in the transaction — in support of the deal and the State of Vermont in opposition.

Late last year, CSX announced that it would purchase Pan Am for an undisclosed amount of money. As part of the proposed plan, G&W would operate Pan Am Southern — a joint venture between Pan Am and NS — and NS will get trackage rights over CSX’s Boston Line so that it can move double-stack trains to Ayer, Mass. The new G&W line would be called Berkshire & Eastern. CSX would operate the railroad east of Ayer, Mass., into New Hampshire and Maine.

Back in March, the State of Vermont came out against the deal. The state’s primary concern was that G&W would control multiple routes in and out of Vermont, leaving the Vermont Rail System as the state’s only non-G&W operation.

“The proposed transactions as currently structured will result in an effective 2-to-1 reduction in service over key gateways and corridors connecting Vermont to the interstate rail network,” attorneys for the state wrote. “This reduction in competition will leave Vermont’s shippers and competing carriers at the mercy of one company, Genesee & Wyoming, Inc.”

While it did not come out against the deal, the U.S. Department of Transportation filed a comment urging the STB to ensure that passenger service, now and in the future, is not adversely impacted by the deal. Earlier this year, both Amtrak and the Commonwealth of Massachusetts came out against the deal partially because they were concerned about how it might impact passenger rail.

Rebuttals to comments are due in a month and, if need be, a public hearing will be held at a future date. Final briefs are due January 3, 2022, and a final decision is expected on or before April 1, 2022.