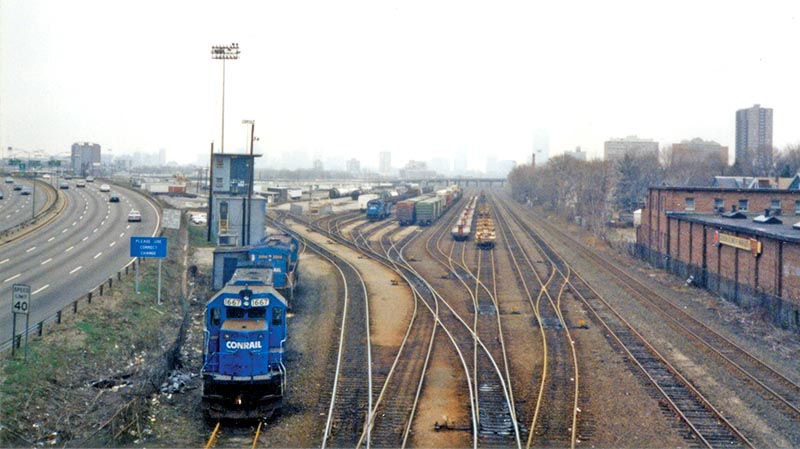 Conrail GP15 1667 and B23-7 2004 idle near the yard tower at Beacon Park Yard in Boston, Mass., on a gray day in 1992. The Massachusetts Turnpike sweeps to the north around the compact intermodal facility, and the city skyline can be made out through the mist. The Boston Line (former Boston & Albany) main tracks are at far right. 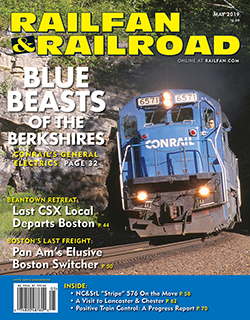 By Otto M. Vondrak/photo by the author

Boston is an old city, with a history that stretches back nearly 400 years to its earliest days as a colonial seaport and later playing a pivotal role in the American Revolution. Three major railroads radiated from The Hub, including Boston & Maine, Boston & Albany (leased by New York Central), and New Haven. Consolidations and closures over the years have matched the ups and downs of the local economy as fewer rail customers dictate shifting traffic patterns. It’s a story that has played out in countless cities across the country. The story of the slow retreat by CSX from downtown Boston is just one example. Author Dan Lowe’s photo of the abandoned Beacon Park Yard intermodal facility triggered a memory from my childhood.

My parents were art and antique dealers and, as a result, they spent a considerable amount of time attending various auctions and flea markets across New England. Unlike other kids, I rarely made weekend plans, because at a moment’s notice I would be hustled into the car at sunrise because my mother had identified some rare item from an auction catalog’s thumbnail photo that she had to have. As we made our way along the highways, the highlight for me was catching glimpses of railroad tracks here and there and wondering what they were used for. Occasionally, a train was spotted but we rarely had time (or inclination) to stop and investigate.

Antique auctions are usually structured so that the items most likely to bring the highest bids are placed toward the end of the sale. For me, this often meant hours upon hours of waiting until it was time to go home. My father would do his best to keep me entertained and, as I got older, sometimes he would indulge me in a little local exploration in search of some trains.

One such opportunity came while attending an auction just outside Boston in 1992. As we approached the city, I was fascinated by the tracks that paralleled the Massachusetts Turnpike, and then got even more excited when a purple-striped MBTA commuter train rushed by in the opposite direction. We reached our exit, which was just past a large Conrail freight yard (which I learned years later was Beacon Park). We were in a hurry to get to the auction hall so my mother could register as a bidder before the sale started, so I had to quell my excitement until the primary mission was fulfilled.

After sitting through a few hours of slow-paced sales and reading and re-reading the train magazines I had brought with me cover to cover, I managed to convince my dad to take me out for a little adventure. It wasn’t that he didn’t want to go, but he had to manage his desire to keep me happy with his desire to keep my mother happy (and make sure she didn’t strain our family finances while he was gone).

My father had a natural ability for exploration, seeming to know exactly which way to turn to find the trains. I forget the circumstances that brought us over to Beacon Park Yard, but it wasn’t very far from the auction hall. Dad pulled over, and suddenly I found myself standing on the Cambridge Street bridge overlooking the yard. It was a rainy Saturday afternoon, and there wasn’t much activity. A couple of Conrail diesels were idling near the yard tower. It didn’t feel like a train was going to come by anytime soon, so I raised my Olympus point-and shoot to my eye and fired off a shot. I don’t remember much else from that day, and I never gave a second thought to my brief encounter.

My subsequent visits to Boston focused primarily on its fascinating transit operations. As far as I was concerned, Boston’s freight trains were few, and ran on unpredictable schedules and routes, which discouraged me from seeking them out. When the news came just a few years ago that CSX would be drawing down its local operations, I thought back to that day standing on the overpass taking in the calm scene of a freight yard at rest. Today, the yard tower and tracks are all but gone. I’m glad I had the presence of mind to record this chance encounter, never expecting the railroad to abandon its terminal in a major Eastern city. Now, it’s all just a memory.

This article appeared in the May 2018 issue of Railfan & Railroad